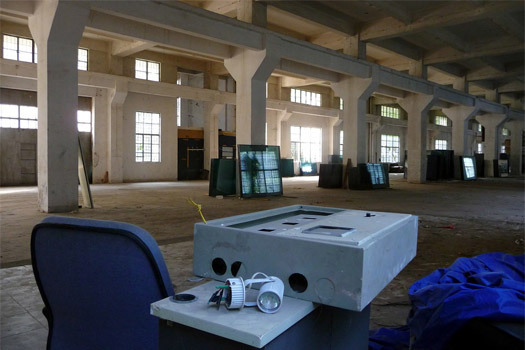 An abandoned factory in Shenzen [photo by dcmaster]

In the aftermath of the Foxconn workers' riot earlier this month, the world's eyes are again cast to the worsening conditions for China's factory laborers. As recently as this week new data suggests international demand for Chinese goods is faltering, further constricting what have already been extremely limited options for workers in the country. As goods lie on production floors unused and factory owners continue to cut low-paying, high-risk jobs, it's likely the massive population of migrant laborers in China will be forced to work under even more perilous circumstances

Today in Design Observer is an excerpt from journalist Hsiao-Hung Pai's Scattered Sand, named after the Chinese term for the 200 million migrating across the country in search of just this kind of factory work. As the situation among these workers worsens, Pai's book provides a grim eyewitness account of the lives and regions impacted by the largest yearly migration in human history.

Pai explores the architecture of Guangdong, a region claiming China's "largest provincial economy" and over 60,000 factories. Though the government once claimed the region as the first to reach a per capita income of $10,000, writes Pai, "it was later discovered that this figure had not factored in the estimated 3.7 million migrant workers living and working in the city at that time." Moving from the train station where migrants first arrive to the dormitories in which they, if lucky, may spend their limited breaks, Pai finds the troubling results of the stagnating economy:

There are three to four million migrant workers living in Guangzhou, which has a total population of about ten million. Many of those I saw sleeping at the station, as well as those who might have left for their villages after a few homeless nights, were first-generation migrants who'd come to Guangzhou in the hope of higher wages and abundant opportunities. Guangzhou was meant to be a life-changing experience. As many of them told me, most had been working there for more than a decade; they had devoted their prime to this city.

Visit Design Observer: Places to read the excerpt in full and view photographs from Guangdong.