Ariella Azoulay: "The Time Has Come" 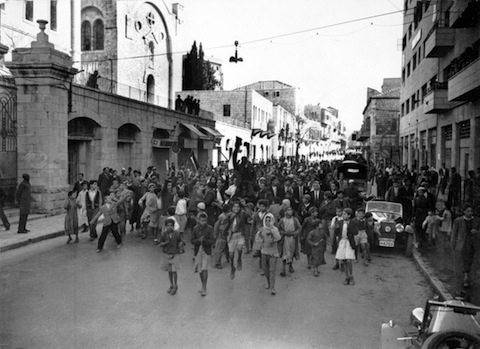 The UN's newly unveiled partition plan is contrary to the wishes of most of the country's inhabitants. Palestinians took to the streets in protest. This was the last time Palestinian protest was perceived as a civil movement. Since then they have been doomed to expulsion and have been viewed as mere assailants from without. Unknown photographer, Central Zionist Archive.

The time has come for the second generation of perpetrators – descendants of those who expelled Palestinians from their homeland – to claim our right, our fundamental and inalienable human right: the right not to be perpetrators. Without this fundamental right one can never be a citizen governed equally with others.

The time has come for Israelis to come to terms with their own past, to give up their exclusive power, to share it with others. For this, Palestine should be re-invented. The only way to do it - without creating more and more disasters - is linked to the silenced memory of this place, a memory of a shared world in which Jews and Palestinians lived together as neighbors, sometimes closer, sometimes further apart, sometimes quarreling, other times laughing together, but in any case, until the Partition Plan of November 1947, violence was only a rare way out. More often they preferred negotiations, promises, agreements and alliances, to solve disputes without which there is no life.

It is time for Palestinians expelled from their land and for Jews who expelled them, to re-imagine their homeland, create an image of it, of the present, of the past, such that will make a future viable. An image of Palestine cannot be created solely by Palestinians. A solid proof for that can be found in the distorted image produced from 48 and on by Jews alone. Palestine does not belong to these or those. Palestine is the place where their imagination must meet in order to put an end to the disaster that has been ongoing since 1948.

The time has come for Israeli Jews to discover the land in which they live, in which their parents have lived, the land that was here before Palestinians were expelled and its rule taken over exclusively by Jews, to discover the land which most of their parents never wanted to ruin and did not a little - even if not enough - to prevent its devastation until the last moment when they were falsely recruited into an "existential war". A simple act of digging under state-planted woods and inside the drawers of archives that became "ours" is the condition necessary for going beyond a past "owned" by one side. Without a common study of the past, a shared future cannot possibly be imagined for them, for their descendants, for the whole region.

The time has come to dismantle the lethal partition - invented by imperialism and colonialism - into "two sides" condemned to imagine their future only through a  lens of nationalism. The revival of pre-partition Palestine is vital for Jews no less then for Palestinians in order to inject a full dose of citizenship into a state in which citizenship has never been a form of partnership but rather a form of dispossession and control.

It is time for the international community to take a civil resolution against the idea of a land belonging to a single nation, be it Jewish or Palestinian. An urgent call to go beyond the disaster of partition should be followed by a courageous reading of the past in a way that partition would appear as pure violence and expulsion of most of its citizens in the name of an insolent demand of one nation – or its representatives – to possess the land for itself alone, will appear as the form it took.

The return of Palestinians to Palestine and the becoming-citizens of Palestinians from  Gaza and the West bank is crucial for imagining a future, in order to practice and get accustomed to the being-together of separate national claims. This return is crucial for Israelis to continue living in Palestine, but not as they do now, denying their responsibility for the expulsion, denying their duty to act towards the return of the expelled. It is crucial so that Israelis might begin to live as equal citizens.

History cannot be reversed but it can be corrected. This burden should be carried by Jews and Palestinians alike. They bear different responsibilities and they should play different roles – there is no symmetry of occupier and occupied, possessor and dispossessed - but their partnership is essential. Without it, the curse of partition will prevail.

It is time for both Jews and Palestinians to understand that the return of Palestinians to their land bears not the future of either people, but the future of them all. In my new film – Civil Alliance, Palestine, 47-48, I assembled no less than one-hundred local civil alliances that Jews and Arabs tried to achieve from early 1947 until close to the declaration of the State of Israel in May 1948. The documents on which I relied have been dormant in State archives, accessible and open for a long time. However, the results of constituent violence condemned most of their content to be read as a chronicle of "collaboration". The film documenting those civil alliances is an effort to return to that point zero, before the world shared by Arabs and Jews was halved almost irrevocably. The film avoids a teleological reading of those documents and makes them appear as what they could have been before Jews and Arabs were condemned to be tied to each other mainly in enmity. It proposes to read those documents as traces of complex and determined efforts of Arabs and Jews to salvage their shared lives.