Get Out of the Dark 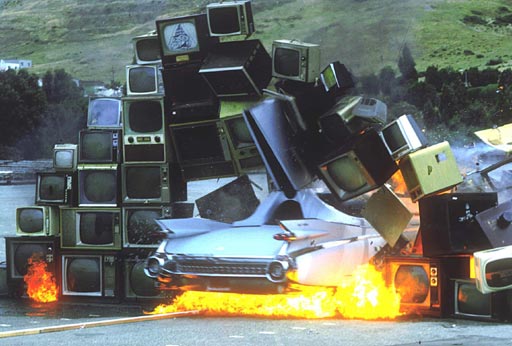 Television encourages passivity; TV viewers are held prisoner; the ubiquity of moving images reduces our ability to resist propaganda: we're so used to hearing such things that we've ceased to ask ourselves if they're true. But the problem is worth further reflection. In fact, if we consider newer individual media – plasma screens, portable DVD players, laptops, videophones, tablets, and television itself – in the context of a longer historical sequence, it's quite easy to see that, in reality, their functioning is characterized by the lack of constrictions that until a few decades ago accompanied the projection of any moving image.

The movie theatre, like its ancestor (the auditorium of the "Italian playhouse"), was designed to shape a very particular public: immobile, attentive, disciplined, receptive. The television, on the other hand, especially since it's worked in concert with the remote control, has decreed the transition from total passivity to a kind of boundless activity, a delivery from that regime of necessity to which spectators had always submitted.

Today we are undoubtedly freer. It's not a given, however, that this new condition is desirable. Imagined from the start for television broadcasts, the new films earn the audience's attention frame by frame, exactly like music videos (syncopated editing, frenetic camera movements...). But above all, the demise of the auditorium's disciplining action radically alters the reaction of spectators, who are no longer called to experience, viscerally and vicariously, an impotence similar in every way to that of the imprisoned characters whose story takes shape right before their very eyes.

Some years ago, one of the contemporary philosophers who has dedicated the most attention to the theatre as an auditorium art, Stanley Cavell, saw in the passivity forced upon the public (who can do nothing for those who suffer on stage) the true heart of the drama. Aesthetic constraint is also a question of politics. The suffering provoked by the impossibility of saving Desdemona or Othello from Iago's machinations serves precisely to make spectators aware that, unlike what happens in the theatre, in our lives we must do something: let ourselves get involved, get out of the dark, allow others to see us and discover us, and at the same time reveal themselves. But for this to happen, we must first suffer in silence and immobility – without seeking refuge in the remote control. While the television comes along precisely to break that link between necessity, suffering, and purification that has characterized the dramatic experience for the past 2500 years.

The death of tragedy?