The Happiness of Margaret Thatcher 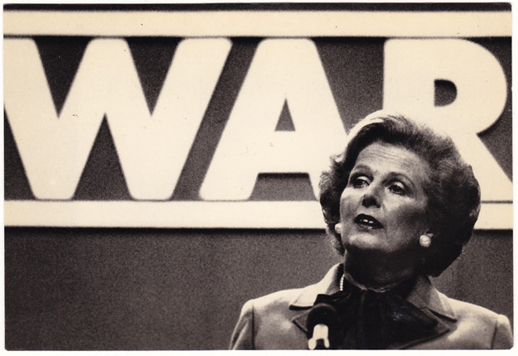 So they win again. If anything is to be taken from the miserable time we endured last week, it must be to learn some lessons about how the enemy operates. It couldn’t have worked much better from their point of view. A series of punitive attacks on the poorest and most vulnerable in society ended up being simultaneously cloaked and justified by the brazen hijacking of an appalling, aberrant act of violence. This is one part of the “legacy of Thatcher” that we will be invited to reflect upon in the coming days. The bitter edge to all those leftist celebrations of Thatcher’s death is all too evident. She retired from the field of class war twenty years ago, her work a spectacular success. Looking at Britain now - a country much more Thatcherite than when she left office – she could have died a happy woman.

The Tories have long been struggling with the problem of how to escape Thatcher’s shadow while continuing her project. Last week, we saw their quest to square a circle – how to lose their ‘nasty party’ image while actually intensifying the attack on the remnants of social democracy – bearing some fruit. Helmed by the reinvented IDS, now cast as a caring but tough-minded friend of the poor, the simple strategy has involved the displacement of the concept of unemployment by that of welfare dependency. The idea of welfare dependency is inherently obfuscatory, part of the inverted world magical thinking the Tories have been all too successful at pushing in opposition. In Thatcher’s day, unemployment was the price to pay for reconstruction; now, insofar as the Tories now mention unemployment at all, it is posited only as an effect of welfare dependency. Just as the state “crowds out” private sector entrepreneurialism, so – we are solemnly informed – the benefit system obstructs the capacity of people to act in their own interests. The Tories now can sound like inverted Marxists who aren’t attacking individuals, but the system which produces their behaviour. In the immortal words of Grant Shapps: “It is not that these people were trying to play the system, so much as these people were forced into a system that played them.” By shifting the focus onto the benefits system, the Tories can pose as the good patrician parent, offering the tough love solution to the bureaucratic indulgences of left paternalism.


Meanwhile, Labour shuffles uncomfortably in the shadows, looking at its feet, before offering up its depressing policy review on the future of welfare. This confirms what few could have doubted: that Labour has learned next to nothing from the failures of Blairism, and that its only strategy is to hide out, do nothing to frighten the horses, and wait for government to be handed back to them as a consequence of discontent with the Tories. Without Blair’s charismatic thespianry and false hopes, without even the Shakespearean drama of Brown’s blighted leadership, an atmosphere of deathly, affectless decadence has settled over the Labour Party. Populist but not very popular, Labour has become a dead mechanism animated by a blind drive: win elections. It is an election-winning machine which can barely win elections, and which has long ago forgotten why you would want to win an election in the first place. By contrast, the Tories have a feverish sense of purpose. They serve ruling class interests even when not in power by dragging the ‘centre’ ground to the right. Once in government, they impose their policy agenda at high speed, without majority or mandate, retrospectively justifying it, if they bother to justify it at all, with the kind of “debate” we saw last week.

No doubt Labour’s silence last week – allowing it to seem as if Owen Jones was the only voice speaking up on mainstream media against the benefit cuts – is motivated by its awareness that attacks on benefits are popular amongst elements of the working class. But rather than challenging this failure of class consciousness and the myths which contribute to it, rather than beginning the difficult work of unpicking this negative solidarity, Labour of course acquiesces in it.

The fact that the right is “using value-laden and pejorative language when discussing benefits and welfare” is not some moral or intellectual error on its part – it is a crude but remorselessly effective form of neurolinguistic programming, designed to create a series of enduring associations which become embedded in the political unconscious. (Some of the miserable effects of this anti-benefits discourse are outlined in painful detail in this moving blog post.) Here, as with the infamous attempts to shift the blame for the deficit from capitalist crisis onto the Labour Party, the technique is incantatory repetition. The Tories know that if phrases and memes are repeated enough times, facts can be suspended. The reality technicians running the right understand that, as Freud said, there is no negation in the unconscious. No matter how much Owen Jones refuted the “arguments” of the right on radio and TV last week, they made hegemonic ground simply by the fact that they had managed to create a chain of equivalence connecting a child murderer with welfare. Whether the right actually choreographed their positions doesn’t much matter, they still functioned as a co-ordinated campaign (the right is much better at class solidarity than us, performing it instinctively). The Mail fulfilled its usual role as outlier, floating an “outrageous” position which it inevitably tempts other media outlets into propagating, thus allowing Cameron and Osborne to “respond” in an apparently more measured – but actually only minimally distanced – way. The right won ground by the sheer fact that the “debate” was happening, and anything we do could only ever be a question of clawing back territory. The right is on the front foot, and we, as ever, are playing catch-up.

It’s worth reflecting a little on the techniques deployed by the Mail – the most-read online newspaper in the world, remember – not least because they involve a certain complicity on our part. “Outrage” is the Mail’s stock in trade, and the bind we’re in is that we seem compelled to provide more than our fair share of it. Outrage is not merely impotent, it is actively counterproductive, feeding the very enemy we claim to want to defeat. That’s because, firstly, outrage is part of the very currency of what Jodi Dean calls communicative capitalism, which depends not on content but on the sheer circulation of messages. Even when the Mail was vilified for its headline, such vilification only becomes the libidinal juice of the Mail’s communicative capitalism (there will be more messages, more posts, more tweets; we will read even if we don’t “want” to; we will read because we’re not supposed to). Secondly, since there is an infinite supply of things to be outraged about, the tendency towards outrage indefinitely locks us up in a series of reactive battles, fought on the enemy’s territory and on its terms. (How many of us on the left, faced with our social media timelines when we wake up in the morning, don’t feel a certain weariness, as we ask ourselves, what are we supposed to be outraged about today?). Thirdly, outrage reflects a fundamental political misunderstanding, both of our opponents and of the war that they are waging. Such outrage, as Wendy Brown puts it in her crucial essay “Moralism as Anti-Politics” “implicitly figures the state (and other mainstream institutions) as if it did not have specific political and economic investments, as if it were not the codification of various dominant social powers, but was, rather, a momentarily misguided parent who forgot her promise to treat all her children the same way.” We use the rhetoric of class war, but too often we behave as if we are engaging in liberal debate with ungentlemanly opponents, whose social power will evaporate once the “errors” in their arguments are pointed out.

In an important blog post last year, Adam Kotsko discussed this liberal leftist compulsion – rife in social media – to point to superficial contradictions in conservative ideology. “’They believe in small government… until it comes time to control women’s bodies!’ Zing!” The problem is that these kind of sarcastic dismissals confuse argumentative or philosophical incoherence with strategic incoherence. The stated rationales for right wing positions may not make much add up philosophically, but seen “in terms of strategy, they all make perfect sense. Taken together, they serve to blame the victims, assert that the powerful are powerful for moral reasons, and then claim that the role of government is to endorse and reinforce the morally-discovered power structure rather than futilely try to disrupt it. The arguments might clash on a superficial level, but their effects are perfectly coherent and rational once the goal is granted.” As Kotsko observes, the “stated rationales” are libidinal lures which “function as a kind of weapon against liberals, who jump at the chance to engage and disprove — and will happily waste infinite amounts of time doing so. It’s like a drug for a certain type of ‘reasonable liberal’: they’re showing their broad-mindedness by engaging in dialogue with their ideological enemies, and they’re showing their intellectual superiority!”

The implication of all this is not that we should withdraw from the debates the right imposes. Once these debates have been set up, we need to firefight, and Owen Jones did a great job last week. But if the right have engaged our resources in permanent firefight mode, that is already a significant victory for it. Just as we can’t simply withdraw from debates, we can’t just ignore the Mail either. The idea that the Mail will vanish if we simply don’t click on links to its stories is as fallacious as the idea that we can destroy capitalism by being ethical consumers. Ignoring the Mail will only mean that we don’t come to terms with the way it shapes what is taken for social reality. We must engage, just not on its terms. Instead of the ‘hot’ response of outrage (with its immediate nugget of satisfaction, achieved at the cost of a long-term political impotence), we need a cooler stance of appraising the enemy’s weapons and strategies, and thinking about how to counter, overcome and ultimately outwit them. Is a left-wing version of the Mail possible? If not, how could we construct a discursive hub that is as successful for the left as the Mail is for the right? This needs to be part of a broader strategy of devoting our energy and resources to goals and projects that will deliver change in the long term, breaking us out of the short-termism that has become endemic in the age of Twitter. What we need to overturn is something that has been the case since before Thatcher’s rise to power – the tendency for reactionary political forces to be pro-active, and for progressives to be reactive.