How To Overcome Defeat: Wu Ming's Altai wins over the mainstream media

As Wu Ming's latest odyssey, Altai, wins over the mainstream media, here is our round-up: a profile interview in the Financial Times, Guardian review, New Statesman interview and Wu Ming select their top 10 utopias in a fantastic Guardian Books feature. 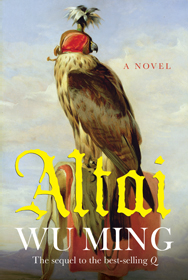 Peter Aspden for the Financial Times goes in search of the elusive writing collective who take him on a magical history tour around Bologna. Visiting memorials to Italian partisans and villagers killed by fascists, Aspden is invited to understand the authors' craft of storytelling as a means to revitalise political and historical narratives:

Like Q, the book is rich in historical detail but contains enough twists and narrative momentum to keep the flagging reader going. The group describes its mission statement – my words, not theirs – as "telling stories, by all means necessary".... From stories of war, bloodshed and political turmoil that remind people that there is a difference between good and bad, and that it is not always so simple to make the distinction. “Some people say our stories are always about defeat,” says Wu Ming 2 as we leave the table. “But actually they are always about how to overcome defeat.”

In the Guardian, the Wu Ming co-conspirators list their top 10 books on utopias: "when dystopia is not dystopian anymore utopia becomes, more than ever, a vital necessity."

Also in the Guardian, more praise for Altai comes from Ian Sansom who admires the book's historical and political direction as well as the quality of the prose. Sansom writes:

"We sometimes forget that the historical novel, ironically, is essentially a form of experimental fiction – counter-factual, anti-realist, and anti the dull mid-range of our everyday experience. Using this apparently conventional form, Wu Ming are able to reinterpret and reconstruct reality according to their own aims and intentions. There are doubtless parallels, for example, between the despoiling, warring powers depicted in Altai and the rapacious nation states of today. But of course many of us would rather read about the adventures of a De Zante than think too hard about the nature of geopolitics. Wu Ming make it possible to do both."

Finally, the Celluloid Liberation Front, discuss politics, the internet and much else with Wu Ming in the New Statesmen. On the subject of female characters in Wu Ming's work, the collective state:

"It is difficult for male writers to depict convincing female characters, that was the problem with Q, the way we described women was... lame. We're very self-critical about that. [...] One of our models is Stephen King, WM1 translated two of his latest books, Full Dark No Stars and 11/22/63. King is pretty good at creating believable female characters... for a man."