No to the Return to Dictatorship in Greece - an open letter 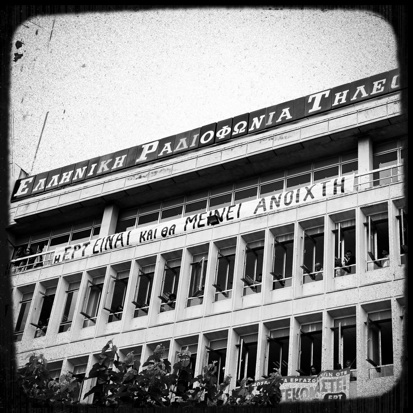 by Étienne Balibar, and 47 other signatories

We, citizens of Europe and beyond, call on all our fellow citizens to support the Greek workers’ and journalists’ general strike.

At a moment when the IMF has implicitly admitted that the privatisations and restructuring imposed by the Troika in exchange for loans – supposedly meant to reduce Greek sovereign debt – have in fact driven the country to ruin, this same Troika (also including the European Commission and European Central Bank) has come to Athens to make fresh demands. Its terms were such that the Greek government has decided to speed up the enslavement of Greece to domestic and foreign neoliberal dictatorship.

The brutal shutting-down of state television (ERT), using strong-arm methods, represents both an extremely serious attack on freedom of expression and information, contrary to the founding treaties of the European Union, and the latest example of the manner in which the EU is evolving towards authoritarianism, to the cost of the interests of its peoples. We, citizens of Europe and beyond, cannot and must not accept this. We call on all our fellow citizens to raise their indignation and support the Greek workers’ and journalists’ general strike. We demand that our representatives in Strasbourg and Brussels order the immediate reopening of the ERT and the resumption of its programming. The moment has come to strike a blow to stop the destruction of the Greek nation and the denaturing of Europe by its own governments, subjected to the diktat of the financial oligarchy.