My hero: Bradley Manning by Chase Madar in the Guardian

Chase Madar, author of The Passion of Bradley Manning: The Story Behind the Wikileaks Story, wrote this 'My Hero' piece in the Guardian. 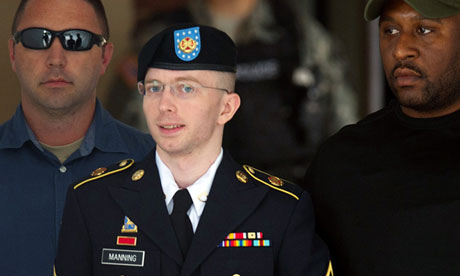 There could be no more bitterly appropriate coda to our Iraq conflict – a debacle schemed up behind official secrecy, distortion and lies – than the prosecution of a conscience-stricken soldier who delivered us the truth. Bradley Manning, WikiLeaks' source inside the US military, was this week convicted of charges that could put him away for 136 years. His crime is to release some 700,000 documents, many of them classified – the largest security breach in US history – though well under 1% of what Washington classified last year.

But his real sin is a failure of cynicism. He thought Operation Iraqi Freedom would promote Iraqi freedom.He thought that a nation where everyone claims to hate the very idea of government would want to know some of the hateful things their government was doing. He probably even thought journalists might stick up for their source if he got busted. His gifts have not been well received at home. A depoliticised society cannot comprehend political motives and reduces them to psychology, sex, celebrity-envy. The fact that Manning was considering gender transition has been seized on as the obvious explanation for the soldier's heroic actions, which makes perfect sense only if you blame the gender straightness of Bush and Blair for the invasion of Iraq.

At his trial, the prosecutors laboured to paint Manning as a traitor, a crazy person, a self-absorbed loser – themes that the "quality" press had helpfully outlined in more muted tints over the last three years.But a young man bearing no resemblance to these cartoon smears took the stand to speak for himself on 1 March.Poised, articulate and with just the faintest tint of indignation, Manning soberly explained why he thought people should know the truth about Iraq, about Afghanistan, about the foreign policy of the world's mightiest nation. Standing 5' 2" in his crisp uniform, he seemed the living incarnation of the still, small voice of reason and conscience.

Manning has not communicated with journalists in the three-year course of his imprisonment, but this will probably changeonce his sentence is handed down at the end of August. I expect that the more people hear from him, the more they are going to realise who in this story has been the responsible and decent human, and who have been the destructive narcissists.

-  Featured in the Guardian

Chase Madar is the author of The Passion of Bradley Manning: The Story Behind the Wikieaks Whistleblower.