Brutality is “in my veins” - Noam Chayut, author of The Girl Who Stole My Holocaust, talks about his experiences as a former Israeli soldier

"Israel should pay a price for oppressing civilians with military forces"

Noam Chayut served five years in the Israeli army, participating in the brutal military Operation Defensive Shield - an attack on the West Bank in 2002.

No longer part of the army, he joined the Israeli organization for military veterans Breaking the Silence in 2004. In his new memoir, The Girl Who Stole my Holocaust, he reflects on his role in the crimes committed by Israeli forces against Palestinians living under occupation. 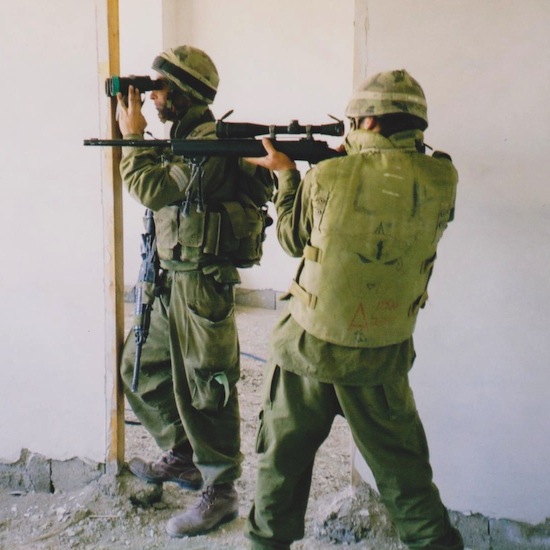 Adri Nieuwhof, human rights advocate based in Switzerland, spoke with Chayut via Skype for The Electronic Intifada.

Adri Nieuwhof: Can you please introduce yourself?

Noam Chayut: I am just an ordinary Israeli, in my mid-thirties. Like most of my friends and the people I grew up with, I enlisted in the army when I was 18. Like many of my friends, I wanted to be an officer. I wanted to give as much as I can.

At that time in my unit, it meant to go to be an officer and to do one more year. So I did not go to the army only because of the law, but mostly because I believed I should give back to society what I can.

Like many of my friends, I was shocked when I met the violence of myself, of my unit, of the army around me, oppressing the Palestinians since the beginning of the second intifada in 2000. I met this ugly face of Israel. It is actually the main focus of my government and a huge amount of our budget and our culture and resources are invested in controlling the neighboring people. With a bunch of people like me, after the military service, shocked and with the urge to do something, we founded Breaking the Silence.

AN: Did you have a specific audience in mind when you wrote the book?

NC: No. The majority of the book was written in six weeks in India, as a spontaneous act. When I came to Israel, Ilana Hammerman, an editor at mainstream publisher Am Oved, was interested in the material of Breaking the Silence. When she read the manuscript, she asked me if I was willing to write more about my childhood. She said that for Israelis to be convinced or to follow you, they need to first love you before you go into your stories of the oppression of the Palestinians. When editing the book, we thought, let’s talk to these liberal people who are so blind to the reality and prove to them that we are creating a machinery to just keep controlling the Palestinian people.

AN: In your book you describe how you used military force to oppress civilians in Palestinian villages or at the Qalandiya military checkpoint. You write how Israeli society brainwashes young people to prepare them for their role in the army. Does the brainwashing block the critical thinking or does it help Israelis try to justify their actions?

NC: In my book, I explain how the brainwashing enabled me to feel that I am fighting evil without noticing that I am the evil. This indoctrination that we are the victims, that we have the right to do this. We really have this narrative that the country was empty and waiting for us.

If I go out in the street to try to convince someone that not far away from here there was a village that was destroyed house by house by the IDF [Israel’s army]  in ‘48 [present-day Israel], most of the people would dismiss it as exaggeration of the Palestinians. If they would even listen.

But in the book, I think it is a justification. Because I did have critical thinking on many things. And I remember having this critical thinking in the army. But it is like a kind of schizophrenia, like two minds in one body. On the one hand, you are so confident that you are doing the right thing, because we are the good guys and good guys do right things.

On the other hand, if you would show me the movie of another planet, or from Africa, I could not agree more that these people are the bad people. And what enables this is the indoctrination. I focus on the indoctrination of us as victims. It is the key for the solution in Israel that we would understand at least that we are not the only victims. It would be a step forward that would enable us to share this land.

AN: The title of your book refers to a young Palestinian girl who is playing in her village. She is frightened when she sees you smiling at her. In my view, the girl is not a thief, but she actually gave you the key to your humanity.

NC: I agree. You call it the key to humanity. I called it opening my eyes or beginning to see the truth. I think it is a different metaphor for the same thing, which is my Holocaust theft. In Hebrew, the title is My Holocaust Thief but the book is about the theft. In Hebrew, the words “theft” and “female thief” are spelled the same. This is untranslatable, unfortunately.

Whenever someone says, “why would you compare, how can you compare?” It is about my Holocaust, the ink of the Holocaust on my heart that someone can steal. That is my business. It is something in our culture and I think also for the Jewish people in the diaspora, we have to start dealing with the Holocaust, with us not being victims anymore.

The girl gave me the key to my humanity, but she also stole my nice privileged life.

NC: Psychological processes such as the one described in the book have a direction and I am still moving. There are many things I did not know when I wrote the book. I did not change anything when I edited the book or translated the book except for the number of Palestinian casualties and things like that.

It is a story about a transformation and transformation does not end. When I read the book today, there are many things that I don’t agree with any more. The cynical tone of violence, I hate it. But this is who I am, who I was. This is part of revealing the truth as hard as it is. I am not only an Israeli human rights activist, I am also a brutal Israeli occupier. It is in my veins, it is in my voice.

AN: I saw you speak on a video of a Breaking the Silence meeting where a participant raises the issue of accountability for war crimes committed by soldiers. You did not evade your responsibility. Can you clarify what justice means for you?

NC: On a high political level I would say that justice means equality or seeking equality. When people go to one state, two state, this kind of federation, then I say, guys, if we are talking about equality, we will find out the way. From a personal point of view, it is the same answer.

Justice means equality. You can choose. You can either put me in jail for twenty years for things that I did or you can release the [Palestinian] prisoners that have done much less violence than me. And since the political power is as it is, they are serving in jail for their share in the violence, and I am free and privileged. If you ask me, I want them to be released and I don’t want myself to serve in prison.

One thing I hope is that anyone who reads the book or Breaking the Silence material would dare to ask him or herself: where am I in this story, what can I do? It is not enough to know and to be moved to cry. It is a call to act.

People have responsibility; it is not difficult to find the responsibility. Of course, my responsibility is greater than others. But others should act as well and there is a lot to do. Western societies have a lot of power and Israel is not asked to pay any political price for what we are doing. A society should pay a price for oppressing civilians with military forces.

The Girl Who Stole My Holocaust is now available to buy.