'The strange world of urban exploration'—Bradley L. Garrett in the Guardian

Place-Hacking, the urban exploration practice championed by Verso author Bradley L. Garrett, has appeared in several mainstream newspapers. For the Guardian, Robert Macfarlane accompanied Garrrett around several of London's subterranean passages. Macfarlane, a fellow explorer and author of the bestseller The Old Ways, describes it such:

Urban exploration, urbex or UE is recreational trespass in the built environment. Among the requirements for participation are claustrophilia, lack of vertigo, a taste for decay, a fascination with infrastructure, a readiness to jump fences and lift manhole covers, and a familiarity with the laws of access in whatever jurisdiction you're undertaking your explorations. Archive and web skills are useful too, for acquiring the schematics and blueprints that will inspire and orient you. Among the sites in your sights are disused factories and hospitals, former military installations, bunkers, bridges and storm-drain networks. You should be content on the counterweight of a crane 400 feet above the street, or skanking along a sewer 10 yards under the asphalt. 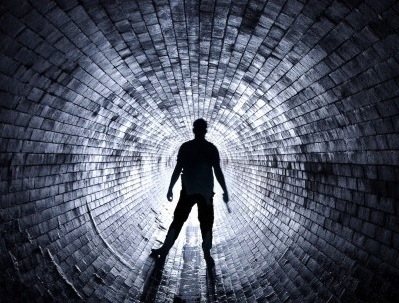 Visit the Guardian to read the feature in full.

Macfarlane goes on to describe the unique vision Garrett has of the urban environment:

Certainly, Garrett perceives the city like no one else I know. Seen through his eyes, it is newly porous, full of "vanishing points", "imperfect joinings" and portals – service hatches, padlocked doorways – that you wouldn't usually notice. The usual constraints on urban motion, whether enforced by physical barriers or legal convention, don't restrict him. The city's accessible space extends far down into the earth (sewers, bunkers, tunnels) and far up into the air (skyscrapers, cranes), with the street level only serving as a median altitude.

In conversation with Macfarlane, Garrett describes his journey from 19 year old skateboard shop owner in California to post-doc at Oxford, encompassing studying maritime archeology in Australia and running a 'cultural resource management firm' in Hawaii. It was his PhD thesis that eventually became: Explore Everything: Place-Hacking the City

His research method was extreme and immersive. He spent four years embedded with a group of London-based explorers – "the scribe of the tribe" – as they enjoyed what he now describes as a "golden age" of UE. He took part in "more than 300 trespass events in eight countries with over 100 explorers... The book's style is volatile and its stories are extraordinary. It narrates "the rise and fall of the London Consolidation Crew (LCC), the UK's most notorious place-hackers"

He personally celebrates it as a form of activism, which "recodes people's normalised relationships to city space", and creates temporary "regions of misrule". Or – as Foucault in a militant mood might have said – they aim "to disrupt dominant hegemonic spatial control through tactical urban infiltration". His book ends with a manifesto-climax that readers will find either rousing or riling: "Wherever doors are closed, we will find a way through. Wherever history is buried, we will uncover it. Wherever architecture is exclusionary, we will liberate it.

The Daily Mail, the Metro and the Mirror also each published several of Garrett's photographs.

The Mirror describes the state's attempts to curtail such exploration of urban space:

Although trespass is generally not a criminal offence in the UK, setting foot on the railways is a different matter, and the explorers eventually fell foul of the law during their search for the disused 'ghost stations' of the London Underground. Garrett was marched off a plane by British Transport Police and his bail conditions currently prevent him from communicating with other members of the LCC.

Garrett, however, remains defiant in the face of such actions:

You build very particular bonds with people when you risk your lives together and when you spend your nights jumping over fences and running from security guards, it's a very particular type of friendship.

Explore Everthing: Place-Hacking the City will be published by Verso this October.

To launch the publication of Explore Everything, Bradley L. Garrett will be appearing at a series of events throughout the U.K