Indefatigable talk machines' on screen: The Pervert's Guide to Ideology starring Slavoj Žižek is out soon

In the lead up to the release of The Pervert’s Guide to Ideology, The Independent and The Guardian have published interviews with the film’s co-creators, Slavoj Žižek and Sophie Fiennes.

Largely improvised, the film exhibits the high octane intellectual energy which characterizes much of Slavoj Žižek’s work. Against the solid identities of conventional academic or philosophical respectability, his ‘habit of self-contradiction’ and ‘impromptu hyper-digressive tours de force’ make his ideas more like ‘protons ricocheting frenetically in the Large Hadron Collider of his brain’ than ‘austere’ philosophical tenets. Jonathan Romney, Žižek’s interviewer, finds joy and humour in this dynamism. For Fiennes herself, Žižek’s verve is near to being sonorous: ‘“you have to engage with it almost like music”’. 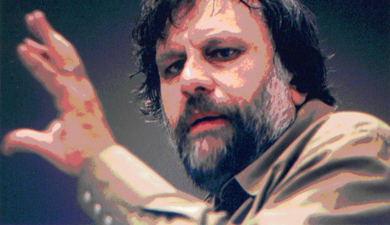 Snatches of the kind of film the audience is in for shine through the interviews:

In a visually playful twist, Fiennes shows Žižek speaking from replica sets, as though he is speaking from within the films themselves – and, by extension, from within our own memories. The result is like the most exhilarating university lecture you've ever seen.

In it [the film], Žižek riffs pugnaciously to camera on the meaning and effects of ideology, with reference to The Sound of Music, Brief Encounter, Beethoven's "Ode to Joy", Kinder Surprise chocolate eggs and the supposedly crypto-fascist stylings of German rock band Rammstein. The film is […] far from a set of dry exegeses. It variously features Žižek sitting in a burnt-out plane in the Mojave desert; strapped to a hospital gurney, after Rock Hudson in 1966 thriller Seconds; and dressed as a priest to explain how the song "Climb Every Mountain" illustrates the ambivalent logic of Catholicism.

Through these playful theatrical gestures, Fiennes showcases ‘philosophy’s Mighty Mouth’ at work. Žižek expounds his opinions on everything from popular cinema to religion.

Some will be skeptical of the high intellectual tone of the work. But Fiennes has a response. When Elizabeth Day asks Fiennes, ‘is it a gamble to produce such unabashedly intellectual work?’, Fiennes replies, ‘"People are bored with being talked down to”’. Others tire of Žižek ’s showmanship, but Žižek doesn’t pay much attention to these criticisms. Against those that question this staging, he responds with ample proof that many admired philosophers were once deemed eccentric. ‘“The more the philosopher is serious, the more he goes into this”’.

Visit The Independent and The Guardian to read the interviews in full.