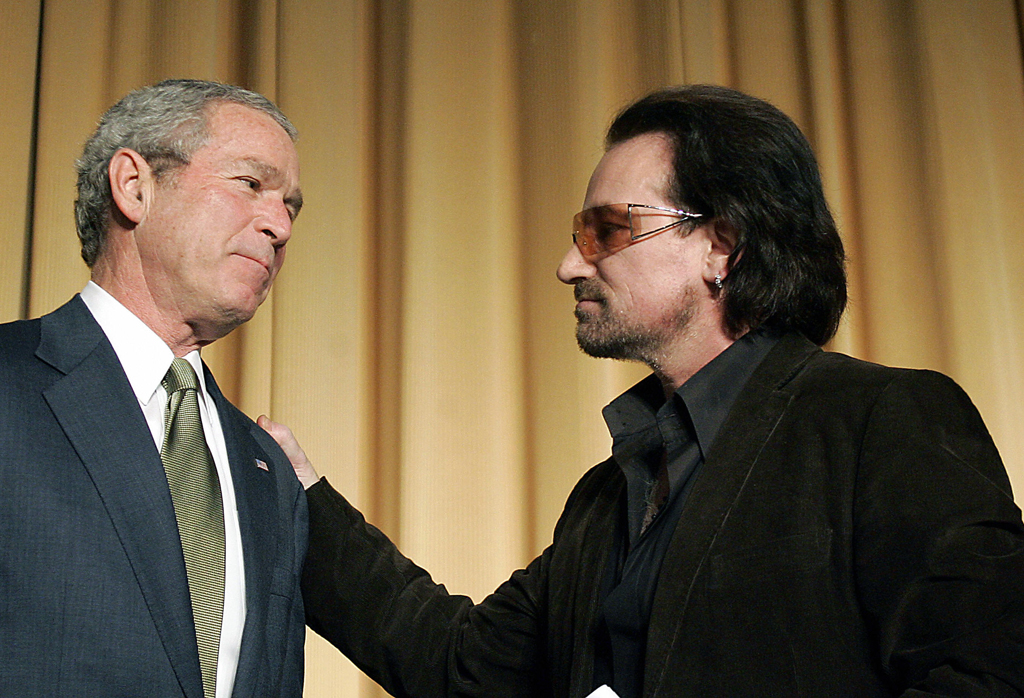 In a recent interview, The Guardian’s Tim Adams confronted Bono about his “cozy relationship with power," misrepresenting leftist criticisms of Bono as “you should never get into bed with neocons under any circumstances….” The accusation was easy for Bono to dismiss, as he did by using one of the many sensationalist images that structure liberal philantropic paternalism: “Try telling that to the woman who is about to lose her third child to HIV/Aids. I know I couldn’t do that.”

Harry Browne, author of The Frontman, corrects Bono's misdirected apology on the NCA website: trying to tell "the woman who is about to lose her third child to HIV/Aids" that it is inexcusable "to work with unsavory people if you want to get things done" is not what either he or fellow Bono critic George Mondiot are trying to do.
Rather, and more pointedly, Browne has qualms with the fact that:

If one enters into negotiations with powerful officials as part of, and having amassed, a genuine alternative base of power, one may wield sufficient leverage to wrest real concessions. But Bono’s model of emotional appeals to elite figures, without doing the hard work of cultivating the kind of popular movement that would give those appeals bite, can secure only those ‘victories’ that do not conflict with powerful interests. The problem with Bono’s method, then, is not that he engages with the powerful. It’s that he does so on their terms.

More importantly, between Bono's relationship with the US military, associations with Tony Blair and George Bush during the Iraq War and  cooperation with Monsanto and multinationals that advance “a new imperial land-grab in Africa” (Mondiot), Bono seems to stray far from his grand humanitarian vision. Moreover, as Browne emphasizes,

the fact is, African countries would have been able to do more about AIDS and poverty, and do it for themselves, if aid and debt relief weren’t saddled with the traditional Washington-imposed conditions: weakening of the state sector, privatisation, the red carpet for foreign companies – all with Bono’s explicit approval. History, including the history of the last two decades, tells us this is the opposite of a recipe for beating poverty.

Visit The Guardian to read the interview of Bono by Tim Adams in full.

Visit NCA for Harry Browne’s answer to the interview in full.

Visit Africa Is A Country for more on this issue.