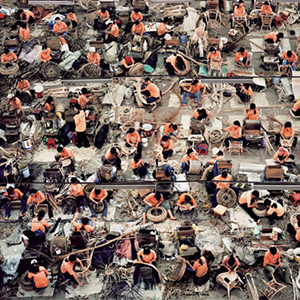 The most recent issue of the journal e-flux includes the first of two excerpts from Pierre Dardot and Christian Laval's The New Way of the World: On Neoliberal Society. The book, which Philip Mirowski has called "a monument of scholarship", provides a nuanced genealogy of neoliberalism as a mode of governance and encourages reconsideration of the recent buzzword.

The extract comes from the chapter "Manufacturing the Neoliberal Subject," in which the authors bring together psychoanalytical and sociological theory to understand what is unique about subjectivity in this historical moment.

The new government of subjects in fact presupposes that the enterprise is not in the first instance a site of human flourishing, but an instrument and space of competition. Above all, it is ideally depicted as the site of all innovation, constant change, continual adaptation to variations in market demand, the search for excellence, and "zero defects." The subject is therewith enjoined to conform internally to this image by constant self-work or self-improvement. His or her own expert, own employer, own inventor, and own entrepreneur: neoliberal rationality encourages the ego to act to strengthen itself so as to survive competition. All its activities must be compared with a form of production, an investment, and a cost calculation. The economy becomes a personal discipline. Margaret Thatcher provided the clearest formulation of this rationality: "Economics are the method. The object is to change the soul."

To read the full extract, visit e-flux. The second part of the extract will appear in the journal's February 2014 issue.