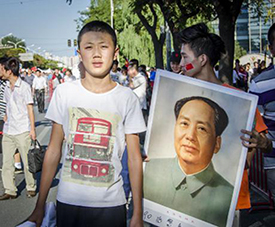 In a January 13 interview with En Liang Khong, Wang Hui proclaims, “there is a certain political correctness among the left that implies that talking about this history links you to its disasters. This is a cheap way of doing history.”

For Wang, author of the book The End of Revolution: China and the Limits of Modernity, doing history better means confronting China’s political ghosts. From the Cultural Revolution to Tiananmen Square, the nation's history has too often been framed from an elite perspective, masking a complex political underbelly.

If you define [the Cultural Revolution] as a monolithic period, then you blame it because of the tragedies that happened, without an analysis of the responsibility for such tragedies, their historic causes, and whether there are more radical, progressive values also to be found in these events. Talking about good and bad is not historical analysis.

Wang goes on to say that by glossing over legacies of struggle, contemporary Chinese workers have been left with little in the way of class-consciousness.  Most present-day resistance aims for individual-level change rather than offering structural critique.

China may have the biggest working class in the world, but it is a different story when you talk of its politics. Of course every day you see different protests, but what of its class consciousness? Predominantly we see disputes focused around raising incomes or certain guarantees of social security. This is a legal struggle focused on individual rights rather than the working class.

In order to remedy this political shortsightedness, Wang proposes that contemporary discourse break from simple narratives about socialism and capitalist democracy:

It is easy to see how, if you announced that China would have a multi-party system with elections tomorrow, Parliament would immediately be taken over by China’s big capitalists. In the multiparty system, all illegal poverty, now through ‘democratisation’, will be made legal.

As Khong writes, Wang’s ability to connect the revolutionary past with contemporary labor politics places him among one of the few Chinese intellectuals "capable of ripping through the nation’s collective cultural amnesia.”