Finding the "enemy within" in a post-racial era: Arun Kundnani on Radio Dispatch 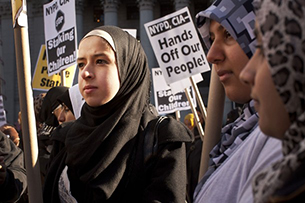 In a shocking February 20 decision, a US federal judge dismissed a civil rights lawsuit against the targeted monitoring of Muslim communities, claiming the New York Police were not, in fact, racially biased when they secretly infiltrated mosques, schools, and social centers.

The motive for the program was not solely to discriminate against Muslims, but to find Muslim terrorists hiding among the ordinary law-abiding Muslims.

The judge went on to say that any injury experienced by the plaintifs was not a result of the spying itself, but rather from the leaking of the information about the spying by the Associated Press.
On the day of the US District Court's NYPD ruling, Arun Kundnani, author of The Muslims Are Coming! Islamophobia, Extremism, and the War on Terror, discussed the socio-historical context of these regimes of surveillance in an interview with Radio Dispatch's John and Molly Knefel. In a supposedly post-racial era, he says, people must come up with alternative explanations about why certain racial groups are targeted more than others.

[People are] trying to find some alternative explanation for why we see certain forms of violence in society without having to face up to the social and political issues that actually lie beneath those acts of violence ... The default explanation becomes some idea about "Muslim culture" or "Muslim ideology."

Throughout the podcast and the book, Kundnani addresses the ways in which these practices—exemplified by the recent federal ruling—are part and parcel of recent efforts to seek out the "enemy within," undermining basic constitutional rights for entire segments of the U.S. population.

The Muslims Are Coming! publishes next month.

Visit Radio Dispatch to hear the interview in full.