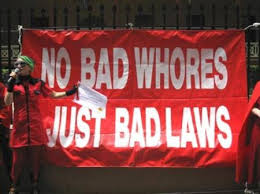 Melissa Gira Grant's book Playing the Whore: The Work of Sex Work —part of Verso's Jacobin series to be released this month—has been receiving some much-deserved media attention for how it radically reframes the current debate about sex work.

You can get a sense of the book by starting with this exctract that appeared in the Nation. In it, Grant introduces her nuanced argument that sex work is a form of work, one that demands political attention, but which need not be idealized:

To insist that sex workers only deserve rights at work if they have fun, if they love it, if they feel empowered by it is exactly backward. It’s a demand that ensures they never will.

Grant has also been interviewed for a number of outlets. Over at the Awl, Grant connects sex work with labor more broadly:

I want people, no what their relationship is to sex work, to be able to have access to control over their job, and not feel disenfranchised just because of what they do for a living. That extends so much further than sex work, far beyond the scope of the book. But that is where I’m leading to. We need to have these conversations about how our work defines us.

Following Gira Grant, Jezebel asserts "insisting that sex workers have no rights in order to justify trampling on them is beyond hypocritical, and speaking for sex workers just to proclaim that they're voiceless only serves to silence them."

More concretely, Grant connects gay rights and sex worker rights in the Atlantic, and in New York Magazine's The Cut, she debunks the myth that sporting events cause increased sex trafficking. Sex-worker-run blog Tits and Sass featured Grant in their activist spotlight.

If you'd rather listen to Grant discuss the book, check out Behind the News with Doug Henwood, where she discusses, among other things, how the discourse of sex work has changed over time:

"Sex work" is a term that sex workers themselves invented to describe themselves, versus something like "prostitute" which is mostly thought of as a demeaning word...For me, what this shift means, and why "sex work" is so important is that it speaks to the idea that this is an activity that people do...It just talks about this one part of their life that is a job, just like any other job.

Over at the Belabored podcast, Grant considers why the "savior complex" doesn't apply to other low-wage service industries, while the subject of police intevention takes center stage in her lively interviews with Radio Dispatch and Citizen Radio.

A few other outlets have reviewed Playing the Whore. The Washington Post Wonkblog calls Grant "one of the most interesting policy thinkers in the country when it comes to sex work." Another blogger says, "I want to recommend that every single one of you reads this fucking book."
Tagged
Feminism
sex work