“A monumental work”: An Impatient Life reviewed in Red Peppers and Socialist Project 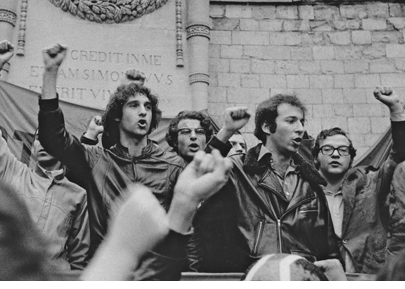 In her review of Daniel Bensaïd’s An Impatient Life, Jane Shallice kicks off addressing the obvious question: “Why should you read this book? Written by a French Trotskyist, who died in 2010, and of whom few have heard and even fewer knew?”

Because there is much to learn from Bensaïd, compellingly retorts Shallice; “there is encouragement from his thinking and his luminous writing.” Shallice portrays Bensaïd as an example of adamant commitment to revolutionary politics in bleak times of depoliticization and a succession of historic defeats by the Left in the capitalist heartlands.

“When living in such bleak times, it is a most crucial work particularly when we have to find ways of sustaining our politics, with few indications of what will terminate this rule of commodity and accumulation.”

“In order for the other world that is necessary to become possible, another left is equally necessary. Not a left “lite”, like fat free butter and alcohol-free wine or decaffeinated coffee but a left of struggle to match the right of struggle. We can no longer be satisfied with a left resigned to the subaltern role of opposition to the republican or liberal bourgeoisie. It is high time to break this vicious circle of subordination. This will be the task of new figures who are starting to rise.”

In an article published in Socialist Project, Jeffery Webber extensively and passionately engages with a work he deems “monumental”, “containing in ecstatic unity all the elements of strategic acumen, aesthetic brilliance, and philosophical probing long associated with this most unorthodox creature of the Fourth International.”

Like Shallice, Webber is keen to emphasize the timeliness of Bensaïd’s lessons, a reinvigorating call to militant activism.

“One part sober reflection on the “art of waiting” impatiently in non-revolutionary times, another part messianic voluntarism, An Impatient Life is an extended meditation on political militancy.”

One solution which Bensaïd brought to the fore is to reappropriate the too-easily dismissed figure of the “secular prophet”.

“Secular prophecy, unlike utopia, 'harasses the present in the name of threatened tradition. It does not promise a guaranteed future in the form of destiny. It warns in the conditional mood of the probability of catastrophe that there is still time to forestall.' For Bensaïd, the secular prophet 'is first of all someone who prevents peaceful sleep. His messianic impatience is an ambush, a watch, a guard, the fully present experience of a proclaimed future that tarries and fails to arrive; they very opposite, therefore, of weariness at the sad repetition of works and days'.”

To do so implies looking afresh at the entire revolutionary tradition of the left and painstakingly work through the doldrums of defeat.

“Since the onset of austerity following the early years of the latest crisis in global capitalism, successful defensive – much less offensive – actions of the Left have been few and far between. The time has come, clearly, to reinvent ourselves, while remaining loyal to our subjugated ancestors. 'Start all over? Certainly. But not from zero. Not from nothing, from a blank page or a clean slate.... One always begins in the middle...'.”

Read the full reviews at Red Pepper and Socialist Project.