Like Strikes, the CTU Is Still Relevant: Incessant Praise for Uetricht's Strike for America 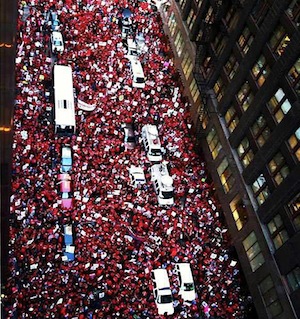 With a rave review by CTU striker Marilena Marchetti published today in the Socialist Worker, Micah Uetricht's book Strike for America continues to garner diverse and enthusiastic press coverage for its portrayal of the Chicago Teacher's Union strike in 2012.

Marchetti's piece combines a thoughtful analysis of the book with an inspiring account of her own experience on the picket line, and confirms Uetricht's description of the support that the striking CTU received from the greater-Chicago community.

From large general-interest publications such as Salon, to literary outlets like Lit/Rant, to radical publications like the International Socialist Network, which insisted that "every trade unionist and socialist worth their salt should read this book," the Internet has been abuzz about Strike for America.

Reviews have appeared in education-focused publications like the blog Creativity Not Control, and have been written by people such as retired public school teachers like Fred Klonsky. As a guest on the Marc Steiner Show, Uetricht discussed standardized tests with seventh graders from Baltimore public schools as well as the CTU's comitment to student concerns.

Strike for America has also featured prominently in labor-focused platforms such as Book Culture's May Day reading list published last week. Uetricht was interviewed on Dissent Magazine's Belabored podcast, during which he discussed the role that radical actions play in achieving pragmatic reform, and recounted his experience handing a copy of Strike for America to Bill de Blasio after running into the New York City mayor at a bar.

Uetricht and Strike for America have been featured in big progressive outlets like Truthout, Alternet, the Majority Report, Radio Dispatch and the Matthew Filipowicz Show, exploring the role of unions in the progressive movement more broadly. In an interview with The Awl, Uetricht uses his insight into unions to analyze the left more broadly.

As a guest on the Chicago-based radio show "This is Hell," Uetricht discussed his vision for the relationship between unions and politicians.

"The primary task of the CTU, and one of the primary tasks of the left, is to create the kind of movements where it doesn't matter whether there's someone friendly to them in office. It's whether they're capable of posing a credible threat to those people and being able to push them to wrest concessions out of them."

Unsurprisingly, Uetricht has been featured on many Chicago-based media outlets such as Vocalo radio, and reviews of Strike for America have appeared in Gapers Block, DNAinfo Chicago, and the Beachwood Reporter. In an interview with Chicago Public Radio, Uetricht argues that the CTU strike has had lasting effects that reach much farther than the Chicago Public School system. "Unions around the country have seen the example of the Chicago Teachers Union and it has stiffened the spines of teachers around the country," he said on the show.

Indeed, two years after the strike with the help of Strike for America, the CTU is still being discussed from the East coast, in outlets such as NYC's WBAI radio, to the West coast in outlets such as Portland-based KBOO community radio.

An exctract of the book can be found on Jacobin Magazine's website, and the full book is available for purchase directly from Verso's website.