Verso Classics: back in print and 40% off!
9 days left
Sian Bradley
comments

On Wednesday last week, in Court 9 of Blackfriars Crown Court, the law finally saw sense and justice was served. More than 20 months after author Bradley Garrett was hauled off a plane on the runway at Heathrow and arrested by the British Transport Police, it was finally agreed that he should be granted conditional discharge and face no further charges.

Garrett first came to public attention in 2011 when he uploaded to his website www.placehacking.co.uk videos of an adventure to the top of the as-yet unfinished Shard. The clips showed not just how exciting it might be to scale the tallest building in London at night, but it transformed the way we could look at the city. Garrett soon proved himself to be more than just an adrenaline fiend, place hacking was the subject of his PhD. This was later adapted into the book Explore Everything: Place-Hacking the City published last autumn. 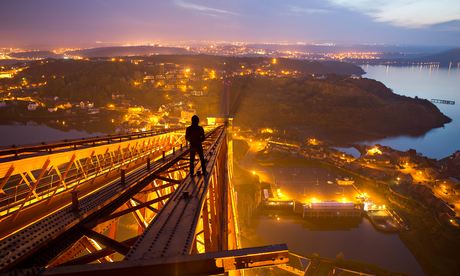 There has already been some coverage of the trial. In the Evening Standard, Will Self highlighted the absurdity of the proceedings:

I’ve no doubt that TfL and the police are justifiably annoyed by the place-hackers’ antics. Entering abandoned Tube stations, the Crossrail tunnels, the old Post Office railway that runs beneath London — these are breaches of security, without doubt, but if any punishment is appropriate for such behaviour it’s some form of community service, not a jail term. These trespassers hurt nobody and damaged nothing, yet their doors were broken down with battering rams in the dead of night.

The Guardian also highlighted some of the issues involved in the case:

He was charged with conspiring to commit criminal damage during sorties into disused London Underground tunnels and stations such as Aldwych. But after growing outrage from academic colleagues who considered the prosecution a fundamental breach of academic liberty, his trial has concluded in a conditional discharge.

The Telegraph also found time to follow the story as well as the Times Higher Education.

As Dr Garrett pointed out: ‘I wasn't in the dock for anything I did, but because I wrote about what I did," Explore Everything is a thrilling book that recounts many of the adventures through the tunnels and up the skyscrapers of not just London but also Paris, Chicago, Detroit, Las Vegas and Los Angeles. Highly praised when it was first published: the book is also a manifesto, combining philosophy, politics and adventure.

What the case proves is twofold: there is a concerted effort to stifle bold and radical research. As Danny Dorling, professor of Geography at Oxford, who works with Dr Garrett notes: "This case raises serious questions around academic freedom. There is part of the state system that doesn't understand what academics do, just as there is part of the system that doesn't understand the value of a free press. We don't want to see people straitjacketed by fear of what might happen if their behaviour has been slightly transgressive."

Secondly, Garrett’s work alongside the London Consolidation Crew, shows how our urban imagination is slowly being eroded without us noticing, and it takes a brave step in to the murky area between public and private space in order to see how ‘our’ city is slowly being transformed into ‘their’ city. This is an example of a wide ranging systematic ‘kettling’ of our experience of the city, which is slowly being reduced down to shopping and working. In the novel 1984 Orwell created newspeak as a way of limiting language in order to muffle protest; what the heavy-handed CPS and BTP have proved in this case is that newspeak also has a spatial potential.

Verso is proud to have worked with Dr Garrett on Explore Everything, and defend his academic right to explore the boundaries of our cities, bringing back both disturbing news and fascinating stories; we are glad that the court has seen sense. As one of the quotes in the book puts it so well: “The Age of Discovery is not dead: it lives on through urban explorers.”