In December 2010, I was sitting in a cafe in Sao Paulo watching an incredible scene unfold on the TV news. A squad from BOPE, Rio's police special forces unit, was crawling through the undergrowth with machine guns, attempting to surround a favela in Complexo do Alemão. With live rounds whizzing past him, a terrified reporter was doing his best to get as close to the action as his camera crew would let him. This, you could see him thinking, was award-winning stuff. Urban warfare, the scoop of his dreams.

The military-style siege was part of a campaign by the state of Rio to 'take back' the favelas, and rid them of the drug traffickers who treated them as their fiefdoms. BOPE action in the favelas was perfectly common, but this was a widespread and strategic programme of 'pacification' aimed at sending a very clear message that government and the rule of law were back. With the two greatest shows on Earth – the World Cup and the Olympics – coming to Rio in quick succession, it wouldn't do to have vast zones of poverty and criminality, no-go areas even for the police, on such obvious display. The city's image was at stake. 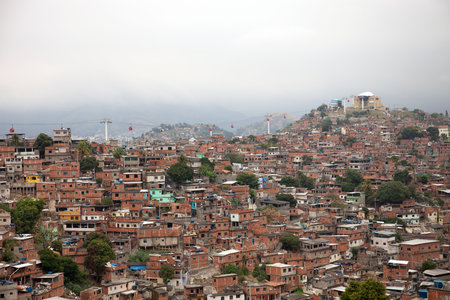 The cable car in the Complexo de Alemão, Rio - a cluster of fourteen favelas and home to 80,000 people. Photograph: Tuca Viera

Rio is changing fast. In the run-up to the 2014 World Cup and the 2016 Olympics, the city faces the prospect of having to build more infrastructure in half a dozen years than it did in the previous fifty. It's not just the millions of dollars being spent on stadiums; whole neighbourhoods are being re-imagined. In Porto Maravilha, the port zone, for instance, miles and miles of new streets, pavements, tunnels and rail tracks are being laid. And the property developers are on the march. In the port, Donald Trump has a multibillion- dollar plan for five office towers that would form the heart of a new business district. On the other side of town, the wealthy suburb of Barra da Tijuca will be transformed by the Olympic Park. Developers are lining up to build luxury condominiums, while the area's favela residents are on the verge of being relocated. Across the city, tens of thousands of slum dwellers are being evicted from their homes to make way for World Cup and Olympic projects.

Following London's example, there is much talk of an Olympic 'legacy'. Can anyone really take this notion seriously? And why is it that the one and a half million citizens of Rio who live in favelas are always treated to 'urban acupuncture', while a two-week global spectacle warrants mega-projects and massive infrastructural investment? Something is wrong here.

In June 2013, by sheer chance, I was in Rio during the largest popular protests Brazil had seen in decades. Triggered by a small hike in the bus fares, a million people took to the streets of the city. Both the pundits and the government initially struggled to pinpoint what the demonstrators were calling for – there were so many issues to choose from. Some decried political corruption, others the huge sums being spent on World Cup and Olympic stadiums at the expense of public services. It felt like half the city was at work designing placards: 'We want FIFA standard schools and hospitals,' was a common refrain.

President Lula had raised 40 million out of poverty, swelling the ranks of the middle class, and now the middle class was demanding its rights. It was like a collective political awakening. Even here, in the home of the beautiful game, football stadiums were being denounced as frivolities. It was a watershed moment, not least for Rio, famous for its laid-back, beach-loving cariocas, because it demonstrated for the first time in a generation that the citizenry is brimming with political potency.

The cidade maravilhosa, the marvellous city, has another nickname. Cidade partida, Rio is sometimes called – the divided city.* Juxtapositions of extreme poverty and wealth are part of what make it instantly recognisable. The favela of Vidigal and the neighbouring Sheraton Hotel, the favela of Rocinha adjacent to the condominiums of Sao Conrado – it's the stuff of postcards. This is not the standard centreversus-periphery dialectic; here, those living on the margins can be right in the centre. The question of how to integrate these opposing pieces is one that Rio continues to struggle with. Mayor Eduardo Paes has said that he plans to upgrade every favela in Rio by 2020. Yet his key strategy, Morar Carioca, the most ambitious slum-upgrading programme Brazil has ever embarked upon, is in limbo.

Architecture books will assert that the one radical city in Brazil is Brasilia. A capital built from scratch according to strict modernist principles, it is the very definition of the formal city. It is also rigid, misguided and outmoded. No: Rio, the birthplace of the favela, is far more radical. The favelas may not be modernism but they are the byproduct of modernity. In their spontaneity, energy and resourcefulness, they represent an aspect of urbanity that is only now coming to be appreciated. And in its varied approaches to tackling urban poverty, Rio has been a laboratory unlike any other in Latin America. Most of those approaches have failed but, in the failures and the successes alike, there are lessons that cities across the developing world could learn. Because the challenges Rio has faced, and continues to face today, are the challenges of urbanism in the twenty-first century.

Amid the maelstrom of competing agendas – the poor demanding a right to the city, the middle classes clamouring for public services, the gentrifiers in search of a better life, the developers hunting profit, the politicians chasing votes, FIFA and the International Olympic Committee – one question needs to be kept in mind: who is the city for? Because, as we speak, Rio is engaged in a struggle for the soul of the city, and the stakes couldn't be higher.

This extract is taken from Radical Cities: Across Latin American in Search of New Architecture by Justin McGuirk - just published and 30% off with free shipping (plus bundled ebook) when you buy through our website.

If Latin American architecture is your thing then you will probably want to read this further extract from Radical Cities on PREVI – the great, but all-but-forgotten experimental housing project in Lima that counted James Stirling and Aldo van Eyck among its contributors.

Justin McGuirk will be speaking at the Serpentine Gallery, London, on the 27th of June.