The 2014 football World Cup and the 2016 Olympic Games in Rio: we can be certain that these two mega-events will accelerate the degradation of most Brazilians’ living conditions and will allow the unleashing of a campaign of denigration against those who oppose it. And there are many protestors against the football World Cup, with their shouts of ‘FIFA go home!’, ‘We want trains, buses, boats and hospitals up to FIFA’s standards’. A World Cup that thus risks aggravating the country’s socio-economic crisis. 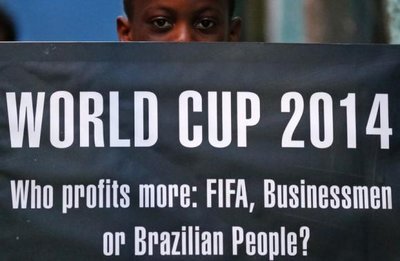 A large part of the Brazilian population has, indeed, well understood that the wild expenditure on twelve stadiums, according to FIFA’s draconian standards, are completely misplaced in a country that is suffering the backlash of the international crisis. These stadiums are already being called white elephants, whose construction or renovation is entirely uncalled for in the context of the relative pauperisation of important sections of the population.

In a remarkable, unheard-of event, in June 2012 the Brazilian Parliament voted through the ‘Lei Geral da Copa’ (‘General World Cup Law’) under FIFA’s diktat. This bill imposes bank holidays on host cities on the days of the Brazilian team’s matches, cuts the number of places in the stadiums and increases their price for ordinary spectators. Conversely, it allows alcoholic drinks to be taken into the stadiums, such as to suit FIFA’s juicy contract with the multinational Anheuser-Busch, the makers of Budweiser beer, one of the competition’s main sponsors.

The General World Cup Law also exempts the companies working for this organisation from taxes and fiscal charges, bans (article 11) the sale of any goods in the ‘official competition spaces, their immediate surroundings and their principal access routes’, and penalises (article 23) bars who try to put on their own showings of the matches or promote certain brands. Finally, it considers a federal crime any attack on the image of FIFA or its sponsors, as well as so-called ‘ambush’ or ‘intrusive’ advertising that uses any image linked to the competition or football in general without authorisation.

FIFA exercises a total grip not only on the organisation of the World Cup, but also on the Brazilian government and even Brazilians themselves judged to be protesting too noisily in the eyes of Sepp Blatter, FIFA general secretary Jérôme Valcke, or Michel Platini, one of FIFA’s vice-presidents, who has called for the demonstrations to stop (‘calm down!’).

To put it another way, the sovereignty of a country that has 200 million inhabitants is undermined by a band of snake-oil merchants, who have set up shop in Switzerland which protects them on account of FIFA’s juridical form as an international NGO (what Swiss law sees as an association without profit goals, listed with the commerce registry in the sense of article 60 and the subsequent ones in the Swiss civil code). In fact, FIFA has billions of euros in its hands and exercises its financial and ideological power in a totally opaque manner.

The leading members of its executive committee make more than a million euros a year per head – and these people’s attitude towards the Brazilians is nothing but a series of humiliating demands. They order the Brazilians to ‘kick some arses into gear’ on the stadium building sites; they openly say that they prefer organising competitions with dictatorships rather than with democracies, while Sepp Blatter deplores the World Cup being ‘politicised’ (the trailer for the World Cup on the Qatari TV network Beln Sports is clear, though plenty subtle: ‘forget politics’). In sum, the ‘thinking’ heads at FIFA and its henchmen would like to bring the Brazilian population to heel with the support of the government, under the regime of football – which has itself become a genuine political power.

What is the legitimacy of these unelected individuals, co-opted onto committees at assemblies held in closed rooms and managed in a totally opaque fashion? What is the legitimacy of FIFA, led by an executive of 25 businessmen (and not one of them is a woman) imposing its vision of the world on an entire people? How can FIFA substitute itself for the elected and representative structures of Brazil?

In a country where the sporting opium, the footballing narcotic, is so pregnant, where support for football is close to a form of religion, where stadiums are considered as being like temples – even so, many Brazilians no longer want to be turkeys voting for Christmas. We will say it straight: football will never be a form of emancipation, and boycotting it, in Brazil as elsewhere, becomes a necessity.

'We want FIFA standard schools and hospitals' - what the World Cup means for Rio: read an exclusive extract from Radical Cities.

Uprisings in South America: A reading list for the World Cup.