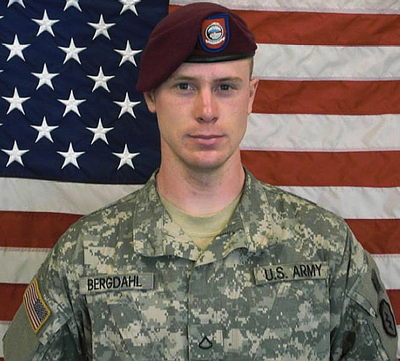 ‘Remember this: the only way you can win - even if victory is only keeping your dignity, reducing a prison sentence or making The Man stumble - is by fighting and politicking as well as you can.’ From Joe Glenton’s letter to Bowe Bergdahl

Joe Glenton, author of Soldier Box and campaigner for the rights of soldiers in the UK and US, sends an open letter to Bowe Bergdahl, who has recently been released from captivity by the Taliban.

I'm Joe. I went to Afghanistan as a soldier and a true believer in my profession and mission before coming to conclusions very much like the ones which you have expressed in your emails home (1). After returning to the UK, I refused a second tour of Afghanistan and was later denied my right to conscientious objector status. I spent two years on the run. I later served a five month political sentence in military prison.

It remains to be seen whether you yourself will be subject to a military trial. I must say that the accusations that your absence caused deaths – which have made up the bulk of the criticism - are relatively easy to refute and I have done so here (2).

For my part, I'd like to sketch out the lessons I learned from my own struggles in the hope that they might be of some use to you for the new political battlefield you face as you are returned home, the rebel soldier of the moment.

Your life will now play out at the intersection of great political forces. In truth, as you will see, your life always has, but because of your current circumstances this reality is now pronounced.

The political game you are involved in is not, as some would have it, centrally concerned with “rights” - human or otherwise, yours or anybody else's - but rather with raw power. If I could impart a single lesson it would be this one.

Like most people back here in the West, I have had access to very few details of your captivity and your motivations for walking out of your base are being contested in the media as we speak. From the leaked emails, however, we have a good idea of what you thought about the war. I can tell you that by my estimation your views of the occupation are those of a majority of soldiers and of civilians.


Various groups of people are fighting to decide how you are to be viewed by the public and indeed what your future holds. Remember at all times that this fight is only partially about you. Although it will at times be put in the most personal terms, often by way of attacks on your character carried out by former “comrades” or pro-establishment veterans (3), don't take it personally.

The debate on you is being framed according to a tried and tested method. The Hero Versus Coward or Hero Versus Traitor model is being used. Don't fear it. It happens to us all. It's like the first time somebody tries to shoot you or to drop a mortar on your head. It means very little in the grand scope of things and, again, its not personal, but rather it is one example of the press exercising its tendency to capture and limit debate in support of the powerful. Get used to that as well.

You and I both know that reality can never be summed up in such a simplistic way. And I assure you, of all the war resisters I have met, many of whom had refused to serve or absconded, not a single one did what they did because they were scared.

As the hero/traitor model suggests, politics is a brutal game of slurs, lies, propaganda and counter-attack and, whether you like it or not, it is a game you must now play. Remember this: the only way you can win - even if victory is only keeping your dignity, reducing a prison sentence or making The Man stumble - is by fighting and politicking as well as you can.

With this in mind you must learn the battlefield, identify the combatants and think on how the US Army and politicians will act against you, how the general population and other soldiers will respond and where you should go to find the allies you will need.

Firstly, understand that the US Army, while a running joke as you have pointed out before, is a powerful enemy. A soldier thinking for himself, and doing so out-loud to a wide audience, is horrifying for the higher-ups. As my lawyer pointed out during my own struggle, “they cannot stand the sunlight. It makes their slime dry up.” They crave darkness and hate transparency. Therefore it is better for you to say what you think as publicly as possible, while bearing in mind you must say the right things at the right times. Be tactical but be loud about it.

Realize that the vast majority of the population of the US shares your views of the war, but that at the same time, the public has been bombarded with propaganda regarding the heroic status of the soldier. When it is convenient for the authorities any criticism of the war can be turned into a condemnation of ‘our boys’. This method of mitigating opposition to the wars represents a huge contradiction; one that you can and should highlight and use to your advantage.

As for US politicians, the first sign that battle lines were being drawn came when senior Republican congressmen deleted tweets they had made celebrating your release (4). The withdrawal of these comments was a good indicator that an official party line was being formed. The right-wing are going to go for you. However this does not mean the Democrats are going to side with you except when it is useful to them.

This scrum will take place not because they know, or even care to know, who you are or what led you away from your base that night, but because they support or dislike President Obama.  A man who is, in truth, politically indistinguishable from his opponents on every topic of importance.

Treat left and right in politics as a broad but useful compass for your journey through the madhouse. When somebody tells you that there is no such thing as left-wing or right-wing, I advise you to read it is a declaration of ignorance in all things political. It is undeniably on the left that I found my allies.

There will also be a great many normal people who will offer you support and succor if you need it. And you will need them whether or not you go on trial because you will be tried by the media anyway. These people are arranged into a vast array of political activist groups and formed into a social movement against war.

In a sense, the same rules apply to these groups as to the military. The guys on the ground, the people at our level, are more often than not fine, conscientious people who invest their time in trying to make the world better. These people, like us as soldiers, are almost always poorly led. But rather than being led by NCOs and officers, they operate at the mercy of self-appointed “intellectual” leaders who carefully maintain an unshakable faith in their own vision of the world. Love the people, they are your friends, but be wary of the leaders because they are not. The latter will be determined to use you as a political meal-ticket, to use you to prove their own personal or political points, and they will lionize you eagerly while you are willing to do as they say and abandon you once you are not.

You best hope is to find other soldiers and veterans like yourself. Men and women who have experienced war and the military and come to reject them. Find them quickly and stick with them, they are your best allies in the trials which you will face. In the United States they are largely concentrated into groups like Veterans for Peace (VFP) (5) and Iraq Veterans Against The War (IVAW) (6).

These groups encompass a broad range people with all kinds of political ideas but are all ultimately committed to the cause of peace. They should treat you as one of their own and will understand, in a way that civilians are incapable of, just what you have experienced and the pressures you are under. They will speak your language and they should know when not to speak at all.

Finally, write or in some other way record your journey. If you can, note down everything as it happens or soon after. Make this a priority. It has the twin affects of keeping you sane and forming a basis for the story you must craft, even if it is only you who ever reads it, for posterity and for the sake of making sense of it all. I hope that some day, when you are recovered and at ease, our paths will cross.