Tony Blair’s (Private) Interests in The Secret World of Oil 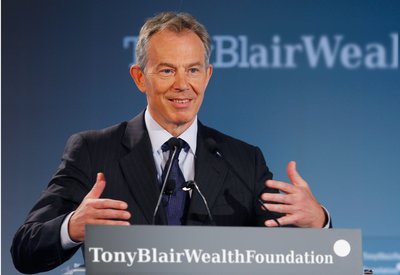 Iraq's latest crisis and its links to the 2003 war brought Tony Blair back into the headlines this week, along with calls for him to step down as a Middle East peace envoy – but new evidence has emerged that his private business interests in the ever-volatile region are expanding.

In his The Secret World of Oil, investigative reporter Ken Silverstein delves deep into the opaque and shady dealings of Blair’s private business interests in the Middle East and elsewhere. Below is an excerpt from Silverstein’s extensive chapter about the former British prime minister 'The Flacks: Tony Blair':

Few have donned the pom-poms with as much vigor, or made as much money, as former British prime minister Tony Blair, whose work in Central Asia is just a small component of the burgeoning business realm he’s built since resigning from public office in 2007. Blair moved to cash in on his time as prime minister almost immediately upon departing from Downing Street. Records on file at the Advisory Committee on Business Appointments (ACOBA), a British government agency, show that he signed on with the Washington Speakers Bureau in October 2007, four months after he stepped down, report- edly netting a $600,000 signing bonus. The records show that he gave his first paid speech that same month, though whom he addressed is not disclosed.

Blair is available to speak on any of sixteen topics, ranging from the global economy and human rights to emerging markets and overcoming obstacles and challenges, and gen- erally “offers an unparalleled analysis of the world’s most difficult and complex issues.” Unlike the case with most speakers represented by the bureau, no information is pro- vided about what it costs to hear Blair provide his pearls of wisdom. The Web site says only that fees “vary based on location and inquiries should be made to the WSB.”

But one can get a sense of his standard fee by consulting the Web site of the All American Speakers Bureau, another agency that at one time represented Blair (and which still advertises his services). All American puts Blair in its cat- egory of Celebrity Headliners and pegs his minimum fee as $200,000. That’s twice the rate demanded by Donald Trump, four times higher than for comedian Don Rickles and ten times higher than for Leah “Coco” Fort, “the devel- oper of the four-step process to personal success known as the Coco Conversion.”

In December 2008, he established Tony Blair Associates (TBA), “which will allow him to provide, in partnership with others, strategic advice on both a commercial and pro bono basis, on political and economic trends and govern- mental reform.” Through TBA, Blair uses his Rolodex to provide door opening services to clients, and also takes a cut on future deals. It’s not entirely clear what he does in exchange for the stiff fees he receives. A 2009 story in New York magazine listed Blair as an example of what the writer called “letterhead hires” and “invisible men.”

No one knows for sure just how much money Blair has made, but the Financial Times estimated that in 2011 alone he raked in at least $30 million in speaking fees and for advising governments and corporations. He and his wife own seven homes, including a £40 million (approx- imately $64 million), seven-bedroom property once owned by Sir John Gielgud. Blair’s transformation into a human cash register has outraged many in Britain, and all the more so as he continues to collect a pension and allowance for a private office that costs taxpayers more than £122,000 (approximately $200,000) per year. Blair’s “love of money” has brought about his complete “moral decline and fall,” Nick Cohen wrote in a column in the Observer.

Blair has set up a complex, deliberately opaque corporate structure that makes it impossible to know how much money he’s making or precisely where it’s coming from. His lawyers and accountants established eight separate corporate entities to handle his business affairs, two of which are limited partnerships that don’t have to publish their accounts. “What has our former prime minister got to hide?” asks Richard Murphy, an accountant and founder of the London-based Tax Justice Network. “Whatever it is, he’s willing to spend good money to keep it hidden.” Blair has thus far declined to accept a peerage that he is entitled to as a former prime minister, which Murphy suspects owes to the fact that he’d have to disclose his income to the House of Lords if he does so.

Whatever one thinks of his politics, Blair as prime minister delivered some memorable speeches. However, the huge sums that he currently commands are something of a mystery. In style and delivery he is so boring as to make a stuffed shirt like Mitt Romney sound like Malcolm X, and the content of his private sector lectures are stunningly banal and pedestrian. “When things are in the balance, when you cannot be sure, when others are uncertain or hes- itate, when the very point is that the outcome is in doubt; that is when a leader steps forward,” he observed in a 2008 speech in Beijing. At a conference on Africa last year he said that there was “something wonderful, vibrant and exciting” about the continent’s culture and traditions, and, speaking of economic development, helpfully pointed out, “With electricity, given the technology we now have at our fingertips, everything is possible. Without it, progress will be depressingly slow. Likewise with roads and often ports.”

So what drives the former prime minister? “Blair is transfixed by money,” Peter Oborne, chief political com- mentator for the Daily Telegraph, told me. “This sort of behavior is more common in America, where the culture is more commercial and presidents—in particular Bill Clinton—have acted in a financially unscrupulous fashion after leaving office. But for a British prime minister, Blair’s profiteering is unprecedented in scale and shamelessness.”

For Oborne, Blair’s dodgy corporate setup, combined with his “long and proven track record of making false statements in matters great and small” (most famously but not limited to his allegations in regard to Saddam Hussein’s alleged stockpiles of WMDs), make it impossible to take him at his word about his current earnings. “He has a history of being economical with the truth, so anything he says about his personal finances is not entirely credible. It might be true and it might not.”

John Kampfner, a former editor of the New Statesman, believes that Blair is motivated by fame as much as cash. “Blair loved being on the world stage, and then he was forced out of office against his will,” told me. “His business deals allow him to remain on the stage and continue to hobnob with the rich and powerful.”

For more information about The Secret World of Oil click here.