Verso Classics: back in print and 40% off!
10 days left
Jordan Skinner
comments

Greece: a victory to build. An interview with Stathis Kouvelakis.

Across Europe, the radical Left has contrasting lessons to draw from the recent elections. Only in Greece did the bearer of a real alternative, Syriza, emerge as the biggest party. The results of the European elections, but also of the regional and local elections, were incontestably a success: but this merely opens up a new period in politics, including the immense tasks of building a social movement. Ensemble's Mathieu Dargel spoke to Syriza member Stathis Kouvelakis. 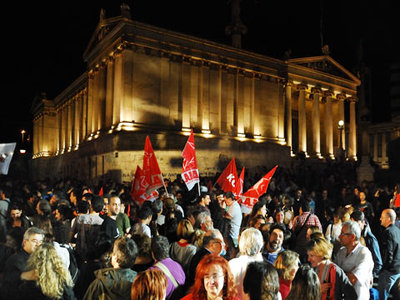 How would you analyse Syriza's results?

The remarkable thing is that Syriza managed to maintain its strength and achieve the same score as in June 2012, amidst a context of very great fragmentation. The parties that are not represented either in the European or Greek national parliament won some 15 percent of the vote. But it is necessary to take a careful look at the results achieved by Syriza and other forces on the Left, for example in the very indicative region of Athens and Piraeus. The advance that the Greek Communist Party (KKE) made in working-class districts, of the order of 2 percent, did not make up for the losses suffered by Syriza. Conversely, in the 'intermediate' districts, the stability or slight fall in Syriza's vote was more than compensated for by the KKE's progress, again of the order of 2 to 3 percent. In middle and upper-class areas, the KKE's percentage – albeit a rather weak one (from 2.8 to 5.6 percent) – rose by at least 1 percent. So we could say that the electoral influence of the radical Left is slightly increasing only among the districts inhabited by the lower, middle and upper bourgeoisie. The provisional conclusion to be drawn is thus the following: the radical Left's lack of dynamism in the most decisive region in the country, inhabited by 40 percent of the population and the majority of wage-earning workers, is essentially due to the drop in Syriza's support, for which the KKE's rise provides only poor compensation. This drop is, certainly, a moderate one, but it is an expression of the tendency toward an attenuation of the 'class' aspect that characterised the very socially polarised ballot of June 2012. Across these two years, Syriza has tended to stabilise its support in those places where middle layers of the population live, and make slight progress in the districts inhabited by the middle-upper classes, but beat a retreat in working-class and popular areas. Syriza has not managed to create a dynamic among the popular classes, urban waged workers and working-class districts where the bulk of its social and electoral weight is situated. The results of the regional and local elections demonstrate the party's insufficient local implantation and work in the trade unions and social movements. The example of the student vote is striking in this regard: according to the exit polls Syriza took 40 percent of the student vote, as against 4 or 5 percent for the KKE, but in the high-turnout student union elections Syriza's lists got barely 7 percent of the vote, half as much as the far Left and a third as much as the KKE.

Could we say that there has been a reprieve for the ruling coalition?

The pro-government forces have seemingly suffered a blow, losing a great part of their strength and their cohesion, but this blow was not enough to force them to head straight for new parliamentary elections. Despite Syriza's 4 point advantage over New Democracy, we did not see the kind of decisive swing that might have brought down the government. The coalition has been destabilised, but it will take advantage of a small breathing space in order to make the necessary manoeuvres to overcome this defeat at the ballot box. For example, it will do everything it can to gather the qualified majority of 186 MPs to elect the President of the Republic next March, and thus avoid early elections. Moreover, the MPs of the parties that support the government will do everything they can to avoid new elections in which they would be designated as the bankruptcy administrators of Greece. Syriza is confronted with the same problem that it has had since 2012: though faced with a fragile government, it has not found the appropriate means to bring it down. The electoral route has been tried, giving results of indubitable note but which are insufficient to secure any immediate unblocking of the situation, and there have not been any major mass mobilisations since the end of winter 2012, following the two peaks of mobilisation during the closing-down of state television and the murder of Pavlos Fissas at the hands of a Golden Dawn hit squad. There is an immense social trauma, with the devastating effects of unemployment and a climate of fear in the private as in the public sector, in which thousands of civil servants are worried by the sword of Damocles hanging over their jobs. All this encourages a certain resignation and an incontestable tendency, at the political level, toward delegating responsibility to others.

What role does Golden Dawn play in this situation?

Certainly, Golden Dawn figures among the winners of last month's elections. A precise analysis of the votes shows that Golden Dawn enjoyed its greatest advance in middle and upper class districts, even if its highest tallies were in more popular areas. This demonstrates that it does have the capacity to expand its audience and its base, despite its extreme radicalism in both word and deed, and even though the greater part of its leadership is in prison. Golden Dawn appears clearly in the eyes of part of the population as an 'anti-system' solution, and it capitalises on xenophobia, racism and nationalism. Today, in spite of the fact that the state was forced to react and repress this party after the murder of Pavlos Fissas, at the risk of entirely losing control of the situation, there is a relationship of tension and complementarity between Golden Dawn and New Democracy, whose right-wing radicalisation is relentless. Some sections of the party are clearly eyeing some kind of de facto convergence with Golden Dawn. The rise of the radical Left, on the threshold of power, has awakened a very strong polarisation, with central parts of the state and the ruling classes beginning to reflect seriously on exceptional solutions, in which Golden Dawn would play an important role. And this will be even more the case when Syriza does take office.

What tasks does Syriza face?

Syriza is confronted with a classic problem for radical Left parties on the threshold of reaching power: the system makes a united front in order to try to prevent this happening, by any means necessary, as for example in the case of the 1970s strategy of tension in Italy. Faced with this, the radical Left, as with the Communist tradition from which Syriza in essence ultimately derives, has a sort of reflex response of seeking to reach agreements with moderate elements of the system, a solution typified by the Italian 'historic compromise', in order to avoid being isolated. Experience shows that such solutions run up against a dual problem: firstly, the heart of the state apparatus and of the ruling classes is absolutely not prepared to give in, and seeks by all means to break the back of these rising forces; secondly, choosing such strategies provokes fatal splits between these forces and their social base. So there is the risk of losing out on both sides. Faced with this, there is an internal debate within Syriza, and the forces of its internal left-wing platform propose a 'new radicalisation' – and this is not simply a clarification at the programmatic level or at the level of discourse. Above all else, it concerns the level of practice – the type of organisation that is to be built and its link with society, on the basis of an orientation that seeks to propel social forces into action. This is necessary in order to achieve a rapid solution and to create the dynamic that is not only necessary for electoral victory, but will become all the more important when a future Syriza government begins to implement its programme. For then it will be entering into a very wide-scale confrontation at both the national and international levels. People need to understand that we face a test of force, and that we must be prepared for it. Not only must we get the organisation itself ready, but we must simultaneously prepare society more broadly, the social layers that Syriza represents, in order to give them structure, organisation and the means necessary for making an impact on the coming events. For example, by re-launching Syriza's open district assemblies, in front of the whole population, as we experimented with in the 2011-12 period. These allowed us to go beyond the questions that regard the organisation itself and build the necessary link with local campaigns and struggles, as part of a perspective of mobilisation. The essential lesson of the European elections is that the two countries where the radical Left made a significant breakthrough, in Spain and in Greece, were the same countries where it proved possible to establish an articulation between important social mobilisations and the emergence of political forces advancing an alternative. The Podemos-Syriza pair are the bearers of the future.

Stathis Kouvelakis is a reader in political theory at King's College London. He is the author of Philosophy and Revolution: From Kant to Marx.

To read Žižek's response to Syriza in 2012 click here.

To read about the closure of E.R.T. Greece click here.