“This is about human suffering created by people who are immune from international condemnation” - Ilan Pappe, interviewed by BBC HARDtalk on the Israel-Palestine conflict 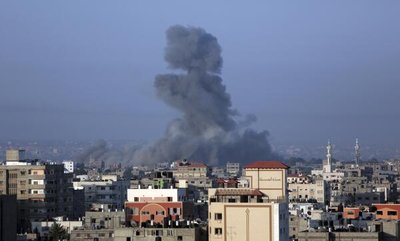 Israel has dramatically escalated the scope of its aerial assault in Gaza this week, hitting hundreds of supposed Hamas targets as the Palestinian death toll continues to rise. A Gaza health ministry spokesman said two Palestinians were killed and three injured in an Israeli air strike on Friday that brought the total death toll so far to 100. This renewed violence suggests a bleak future for Palestinians and Israelis.

Behind this latest conflict lie long-standing historical issues – an occupation which makes peace impossible for both Israelis and Palestinians.

Israeli historian Ilan Pappe places Zionism under an uncompromising lens in his latest book The Idea of Israel. He was interviewed on BBC HARDtalk on why he believes Israel is founded on a deliberate programme of ethnic cleansing.

93% of the land is exclusively Jewish in Israel. Palestinians are not allowed to build new settlements, new villages, they are not allowed to expand the cities. They are not getting the same national security, the same welfare benefits as the average Jewish person is receiving in Israel.  Their educational system is segregated from the Jewish educational system. On every aspect of life - judicial, legal, financial - they are discriminated against.

Zionism has a vision of having as much of Palestine as possible with as few Palestinians in it as possible.

Predictably, the last 9 months of US-led peace talks have failed, sadly replaced by violence and killing. Although he sees no simple solution, Ilan Pappe argues that:

In a country where half of the people are not Jewish, a state cannot be founded on the basis on ethnic exclusivity or supremacy; there needs to be a more democratic, a more egalitarian, a more fair political outfit that would respect the rights and aspirations of everyone who lives there.

You can watch the interview in full, here.

More on The Idea of Israel by Ilan Pappe.