The Case for Sanctions Against Israel

Leading international voices argue for boycott, divestment and sanctions against Israel - ebook now available for free on our website.

Three weeks into Israel's current assault on Gaza, the number of Palestinians killed has already exceeded 750, yet Israel fights on, targeting civilians and civilian infrastructure, including minors. The situation, now desperate, is the culmination of seven years of economic siege against the Palestinian population, in which Israel has virtually crushed the Palestinian economy by confining its goods and people to the open-air prison of the occupied territories. 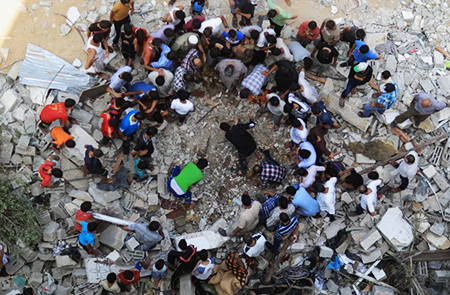 Over twenty years ago, during the First Intifada, Palestinians organized a boycott of Israeli products and were met with arrests, beatings, curfews and sieges. Although the Boycott, Divestment and Sanctions movement against the Israeli occupation has ballooned since then, it has also received criticism from some on the left over issues of tactics, and been dismissed by the political mainstream for foreclosing "peaceful means of reconciliation." In reality, Israel has long since violated the conditions of the 2012 Egyptian-brokered ceasefire, which ended Israel's "Operation Pillar of Defence" and called for an end to hostilities and for Israel to facilitate the movement of goods within Gaza. Gazan civil society has reiterated it's call for BDS, while the current assault only reaffirms the need to explore alternative means for pressuring Israel to end its occupation and assault.

To deepen the debate and discussion around BDS as a strategy and movement, Verso is giving away the ebook of The Case for Sanctions Against Israel for free. Just add the FREE ebook to your shopping cart, then checkout (without making a payment) and download the ebook from your Verso Library page to any reading device.

Two years since we published The Case for Sanctions Against Israel, the arguments contained within remain just as salient. Little of what Mustafa Barghouthi, in the opening essay, describes of Palestinian life under Israeli occupation has changed. The political, economic and cultural assault on Palestinians—as detailed by Omar Barghouti, Nada Elia and Merav Amir & Dalit Baum—continues unabated; and as a result, the various arguments from Naomi Klein, Omar Barghouti, John Berger and Ken Loach for BDS as a necessary strategy seem to ring as true as ever. In subsequent chapters, Ronald Kasrils, David Lloyd and Angela Davis draw parallels between the Palestinian situation and other historical struggles (Apartheid South Africa, the colonization of Native Americans and women-of-color feminists), but what Nelson Mandela once said is now undeniable: the Palestinian plight presents the foremost challenge to the international humanitarian conscience.

You can download the ebook of The Case for Sanctions Against Israel here.

The case for sanctions, from one of the BDS movement's leading figures, Omar Barghouti.

A recent roundtable on BDS at The Nation, with responses to Noam Chomsky from Yousef Munayyer, MJ Rosenberg, Nadia Ben-Youssef, Ran Greenstein and USACBI.

Read more on the horror of the Israel-Palestine conflict from Ilan Pappe, Shlomo Sand,  Naji al-Ali and Ghada Karmi on our reading list.

“This is about human suffering created by people who are immune from international condemnation” - Ilan Pappe, interviewed by BBC HARDtalk on the Israel-Palestine conflict

Eliminating the Palestinians as a political entity by Yitzhak Laor