Racecraft reviewed in the new Dissent. PLUS: Verso joins Dissent for the fall issue launch party tonight in NYC

What we don’t talk about when we talk about race: racecraft, or the dark magic of racism itself creating and maintaining the illusion of race.

Sociologist Karen E. Fields and historian Barbara J. Fields investigate this pervasive yet nearly-invisible practice in Racecraft: The Soul of Inequality in American Life, released in paperback earlier this year. In his review of the book for Dissent Magazine, Walter Johnson praises the Fieldses roving-eye portrait of racecraft, from the American Revolution to the eve of the Occupy movement in 2011, and how this practice has informed the broader quilt of inequality and capitalism in American society:

“Fields and Fields…provide a sustained and brilliant exposition of the history and practice of race-marking in America. If race is ‘socially constructed,’ as virtually every educated person in the United States knows it officially to be, then why do we believe we can determine the race of the person on the other end of the line as soon as we pick up the phone?”

According to the Fieldses, when discussing race, we too-easily and erroneously conflate “hereditary” and “genetic” with “racial,” and Johnson adds:

“Any invocation of ‘race’ as an explanatory or even descriptive category is in and of itself racist. The use of ‘race’ to explain anything from ancestry to economic inequality unwittingly reinforces the false belief in deep-rooted biological differences between black and white people. ‘Ancestry,’ according to the authors, should be understood as a way that individuals are linked across generations without being thickened into ‘race.’ Heredity, whether responsible for visible traits like curly hair or hidden ones like the sickle cell, is just that and nothing more.”

Categories such as “Hispanic,” “Asian-American,” and “Native American” are fallible, as identifiable races are illusions. The Fieldses argue what matters are “the actions that constitute racism—enslavement, disenfranchisement, segregation, lynching, massacres, and pogroms,” as well as everyday racism: comments, side-glances, and assumed judgments. According to Johnson, racecraft has not only been relegated to our mediascape, where relevance is measured by beginnings and endings (“the ‘post-racial” election  of the ‘first black president’) but “the hallowed grounds of academia” as well; “racial” causes are used to explain what are really social effects. Johnson’s fascination with racecraft's invocation of witchcraft is threaded throughout the review, as is his passion for the book.

For more on Racecraft: The Soul of Inequality in American Life, click here.

And TONIGHT: Celebrate the launch of Dissent's fall issue and redesign in Brooklyn. RSVP on Facebook or email Natasha Lewis at lewis [at] dissentmagazine [dot] org to add your name to the list. 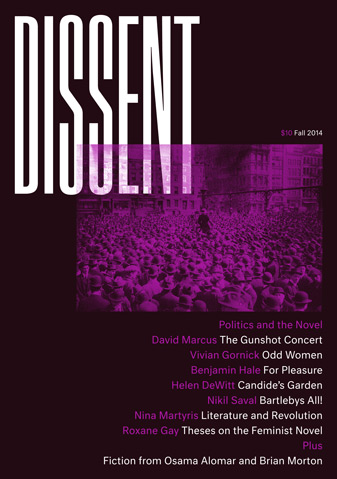