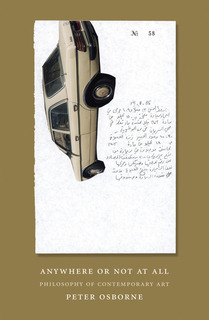 Peter Osborne's Anywhere Or Not At All: Philosophy of Contemporary Art has won The Association for the Study of the Arts (ASAP) prestigious book prize this year. The prize is awarded annually for a book rich in "wide-ranging scope and incisive engagement with contemporary aesthetics."

"Anywhere or Not at All aims to revive philosophical art criticism, arguing that a critical history of contemporary art depends on interpretive confrontation with specific works. Osborne proposes that contemporary art is post-conceptual art and turns his attention to Robert Smithson, Gordon Matta Clark, Gerhard Richter's Atlas and the work of the Atlas Group. In his final chapters, Osborne examines what he calls the "geopolitical fiction" of the contemporary as it constructs and negotiates the disjunctive unities of time and space in the era of globalization. Seeking to move beyond an understanding of contemporary art as merely eclectic, Osborne argues that the attempt to wrestle with the conditions of transnational globality actually provide the unifying concept of contemporary art. Osborne’s is a paradigm-shifting argument, and all scholars in the field of contemporary art will—whether they agree or disagree with it—inevitably have to come to terms with it.”

This year's runner-up is Min Hyoung Song's The Children of 1965: On Writing, and Not Writing, as an Asian American (Duke UP). Matthew Hart, president of ASAP, tells us the judging was extremely close and that the prize committee was "delighted" to honor books of "such moment and style."

A hearty congratulations to Osborne, Song, and all those who helped bring these books to fruition.

For more on Anywhere or Not at All, click here.