From Ferguson to Toulouse: the banalisation of repression and the licence to kill 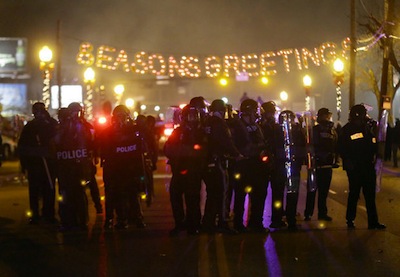 Just days after Cleveland police killed a 12 year-old black boy, the grand jury declined to press any of the few charges levelled against Darren Wilson, the policeman whose shooting of the adolescent Michael Brown sparked the first revolt in Ferguson this August. Wilson commented, ‘I know I did my job right’, saying that he had ‘a clear conscience’. When this verdict was announced, thousands of people took to the streets, condemning its openly racist character. The police and military repression of these demonstrations is but one more sign of the collapse of illusions in America’s ‘post-racial democracy’.

But France is not America, people say: the historical depth of its democratic sensibility is unequalled, and while everything that’s going on across the Atlantic is certainly regrettable, it’s far from being at our door. And yet after the murder of the young ecologist student Rémi Fraisse in Sivens (Tarn) on 25 October, the French government and all its representatives have not ceased issuing statements clearing themselves of any responsibility for his death

The political class winced a little, for sure, but without it becoming a casus belli. Anyway, what reaction was there to the tearful statements made by the lawyer representing the gendarme who threw the murderous grenade? He told us that his client was ‘in the same state of mind as a driver who stuck perfectly to the highway code but whose vehicle fatally struck another road user who didn’t respect the limits. What happened was an accident. He is neither guilty nor responsible, but he was present, and it was his grenade that killed Rémi Fraisse. He is learning to deal with this drama, despite his great emotional distress’.

The rhetoric varies but at root it’s all the same: it’s the victim who’s at fault.This psychologisation is but the complement to the denial – from the very top of the government to the prefects and magistrates – of the very fact of police violence, backed up by respect for ‘Republican order’ and ‘the rule of law’. Poor old repressive apparatus: is that really it? What kind of democracy is this, in France, that absolves repression? And, above all – who today is going to dare to rise up and challenge this banalisation of the licence to kill those who revolt, those who dissent? Who is going to denounce the normalisation of the ban on demonstrating our anger – like in Toulouse in November, where banning orders were slapped on four demonstrations against police violence in the wake of the Sivens murder, three of them being violently broken up, with a flood of arbitrary arrests and convictions  – ? Some people may even be imprisoned, after sentencing in Toulouse on 4 December. A solidarity rally has been organised in front of the city’s Palais de Justice in response.

For their part, the mobilised students of the city’s Université du Mirail have not yet taken control of their university, but their revolt is a deep and profoundly political one. They have understood that survival requires that we defy bloodstained arbitrary power, especially if it is dressed up in democratic attire. For the moment they feel alone, even though they have begun to occupy the campus and take back control of the streets. Is it really so necessary to wait for everyone to be taken away – like in Niemöller’s poem, often misattributed to Brecht – without ourselves feeling any concern, before then acting all surprised when they come for us too?

A light in an ocean of defeatism

Do we need a rerun of the Charonne metro massacre of ’62, a Ferguson à la française, in order to remind us that when a power has picked up the taste for banning demonstrations, justifying the unjustifiable and throwing itself into political trials, we are within touching distance of the ‘state of exception’ where anything becomes possible? Have we forgotten that in 2005 two young adolescents – innocent, but pursued by the police – were killed by electrocution, triggering the great banlieues revolt? Of course the Left, as a whole, was very careful not to get too close to that.

In 1964, Herbert Marcuse – a symbol of the American intellectual trying to think at the level required by the times in which he lived – wrote in One-Dimensional Man that one of the remaining hopes of revolution, existing alongside the crisis-ridden American labour movement, was students in revolt. Sadly the fiftieth anniversary of this work has been neglected in France. But the students’ ‘great refusal’ was a light in the ocean of defeatism and defensive retreat which then characterised both reformists and the far Left. Indeed, May ’68 in France also began with resistance to police repression, with a student revolt that met with solidarity from the labour movement, thus opening the way to the most important general strike in the history of the class struggle in Western Europe.

Of course, the historical conditions are not the same today, and any comparisons are not of current relevance. But defending democratic freedoms, self-expression and the right to demonstrate, and condemning police violence – well, all that must be non-negotiable. It is utterly unacceptable that a protestor can be arrested and convicted simply for demonstrating; but it’s even worse that all this can take place without sparking mass indignation.

We who sign this column are ‘intellectuals’, as the well-worn formula has it. But as Sartre recalled during the Algerian war, there are no intellectuals and masses, just people who want things and fight for them – they’re all equal. Today we are in a grave situation. The most elementary democratic rights are imperilled, and revolt is quite rightly rumbling. Yesterday we were ‘all German Jews’, today we are all ‘participants in banned demonstrations’. Exceptional justice is the prototype of the state of exception; once again, capitalist democracy enters into a period of hate, and its mask slips. Whoever won’t look this in the face, whoever won’t rise up until it’s too late, is necessarily – in one way or another – complicit.

From Le Monde, 2 December.
Translated from the French by David Broder.
See the original article here.