Michael Brown and Eric Garner Together: What the Defenders of Police Violence Defend by David Roediger 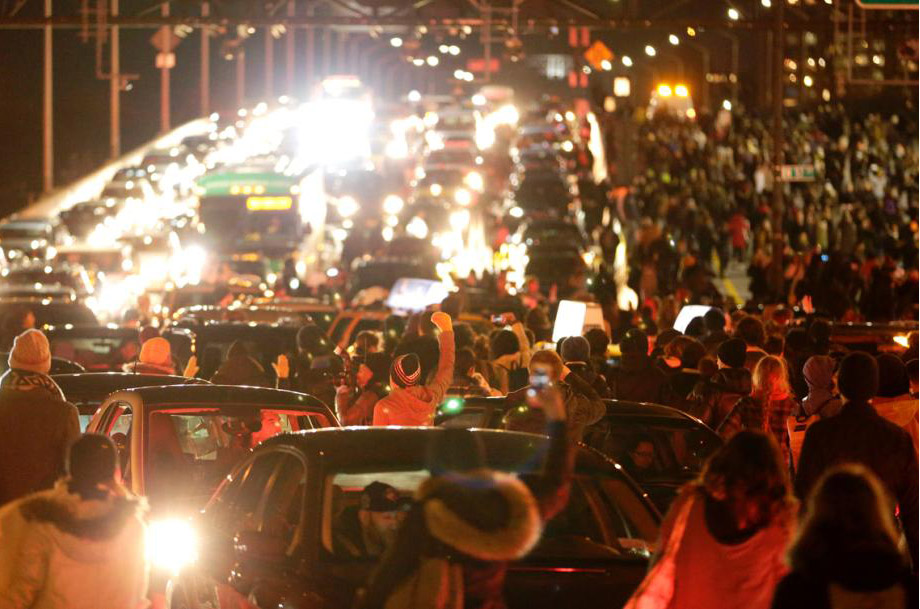 Emerging from blogs to CNN, from bars to barbershops, the past days have seen a growing view that justice for Eric Garner is somehow more righteous than for Michael Brown. The "murky" details of the Brown case contrast with the long and gruesome video of Garner's killing. Even prominent conservatives, from Charles Krauthammer to Bill O'Reilly, allow that the Garner case troubles them while the Brown case does not. The Washington Post's Aaron Blake reports polls showing that whites are twice as likely to oppose the grand jury decision in New York as they are the decision in Missouri, and also seems to endorse such conclusions.

To television correspondents, the protests seem to be better in New York as well. The supposedly extreme violence of the response in Ferguson and St. Louis to the non-indictment in the Brown case hardens into a tale that ignores the communities' spectacular practice of militant nonviolence over many months. Missouri becomes the bad counterpoint to the alleged sophistication and "restraint on both sides" on display in New York. The tactical innovations of the Missouri movement, networked nationally and with several of its leaders present in the early days of the Garner protests, changed what could be imagined in New York City. Such breakthroughs too easily get lost in the mass media shuffle. Awareness that we are seeing a national movement leaping past the traditional civil rights leadership is far clearer to participants than to commentators. That movement is led not only by a new generation but also by activists from unexpected places.

The stark differences in media portrayals of the cases of and of the movements surrounding Brown and Garner will almost surely narrow. If New York City grand jury testimony is not released there are likely to be selective leaks, for example of autopsy results on Garner's general health, that attempt to undermine the force of the video. These may send troubled conservatives to the ask-no-questions fold regarding Garner's death. If the Department of Justice refuses to indict in the New York case as well as the Missouri one, a broad swathe of liberal opinion will also lose concern. If the movement in New York can sustain its rolling occupation of public places, the coming police violence will remind us that urbane New York is the state of the murderous attacks on Attica prison protesters and the city of fierce police raids on Zuccotti Park, the Occupy movement, and undocumented immigrants.

Thinking more seriously about the police murders of Brown and Garner together yields critical insights. In the days after the Brown grand jury decision, protests raced from city to city. The media usually saw them as being about solidarity with Ferguson. And they gloriously were. However, they also spread because in each city where they occurred, police violence had left its own bloody trail. That the closure of Lake Shore Drive by Ferguson protesters in Chicago can be reported on without reference to the reign of falsification and police torture conducted by the recently convicted Jon Burge and others indexes the poverty of U.S. journalism.

When New York marchers closed the FDR Expressway over the Ferguson decision, and before the Garner one, they of course had in mind the cases of Garner and of the unarmed Brooklyn resident Akai Gurley, killed by police this November. Going further back some mourned death and torture in the cases of Sean Bell, Abner Louima, Amadou Diallo, Nicholas Heyward, Jr., Anthony Baez, Eleanor Bumpurs, Ramarley Graham, Kimani Gray, Tamon Robinson, Patrick Dorismond, and many others. As inspiring as it was that activists came to St. Louis to support justice for Michael Brown, it has mattered equally that the sustained energy of young African-American activists in Ferguson has reanimated movements against police brutality across the nation, and to some extent, the world.

Finally, and most importantly, thinking about the Brown and Garner murders together offers a way to get beyond the "who was more innocent" narrative pushed in the media. The video in the Garner case bears on the Brown one; its presence shows what prosecutors and police are eager to defend and the slant they bring in approaching a fatal encounter between police and a person who is African-American. Despite what the video clearly showed, the same people defended police conduct in both instances. The very same talking heads who repeated the pro-police St. Louis County prosecutor Robert McCulloch's contention that all evidence led to non-indictment in the Brown case did not linger long over the fact that video evidence did exist in the Garner case.

The Democratic politician and St. Louis Police Officers Association bureaucrat Jeff Roorda, himself fired as a policeman in 1997 after being charged with filing a false report, did double duty in the media. He argued that the police side of the case against probable cause had been proven correct in the Brown case. In the Garner case, Roorda became an instant expert exonerating the officer despite the visual evidence and medical examiner's report establishing probable cause that a crime had been committed.

Roorda recently held that McCulloch rightly only went through the motions of a grand jury procedure, knowing that Darren Wilson was innocent in Brown's death. He further implied that the prosecutor of the Garner murder in Staten Island did the same proper thing. This judgment, made at the junction of white supremacist common sense and police and prosecutorial common sense, defines the problem. It also underlines the utility of thinking deeply about what the Garner case has to teach us about the Brown case.

David Roediger is the President-elect of the American Studies Association. He is the author of the recently released Seizing Freedom: Slave Emancipation and Liberty for All.