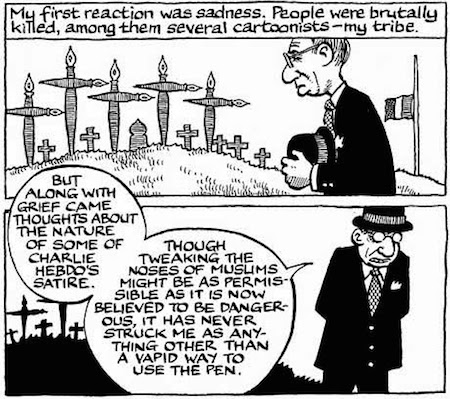 The January 7th massacre at the Charlie Hebdo office in Paris has sparked an outburst of critical conversation across social and other media concerning freedom of expression, the politically charged proliferation of the ‘je suis Charlie’ slogan, and the consequential upsurge of anti-Muslim sentiment. On the London Review of Books blog, Adam Shatz considers the implications of the populist Charlie slogan as a “declaration of allegiance” that counterpoises itself against those “on the other side…the Islamic enemy that threatens life in the modern, democratic West”. In The New Yorker, Teju Cole questions whether it is possible to defend racist speech without endorsing racism, arguing that it is possible to condemn the murders of the Charlie Hebdo cartoonists without condoning the ideology of their cartoons. Along similar lines Tariq Ali reflects on the contents of Charlie Hebdo itself – satire that primarily targeted Islam, and paid far less attention to Judaism and Catholicism. Also well worth a look is Joe Sacco’s take on the events – a cartoon that is itself a pastiche on satire, the medium responding to the medium, so to speak. We have put together an essential reading list of works that contribute to these current debates, including books by Franco “Bifo” Berardi, Tariq Ali, Patrick Cockburn and Gareth Peirce.

The Rise of Islamic State: ISIS and the New Sunni Revolution by Patrick Cockburn
“His dispatches from Iraq are an exemplary untangling of the political and social complexity that lies behind one of the world’s great crises. He writes fairly, compassionately and clearly, with a steady and knowledgeable eye.” – Orwell Prize

The Muslims Are Coming!: Islamophobia, Extremism, and the Domestic War on Terror by Arun Kundnani
“Arun Kundnani is one of Britain's best political writers, neither hectoring nor drily academic but compelling and sharply intelligent. The Muslims Are Coming should be widely read, particularly by liberals who consider their own positions unassailable.” – Robin Yassin-Kassab, Guardian

Heroes: Mass Murder and Suicide by Franco “Bifo” Berardi
“Bifo is a master of global activism in the age of depression. His mission is to understand real existing capitalism. Sense the despair of the revolt, enjoy this brilliant ‘labour of the negative’!” – Geert Lovink, Founding Director of the Institute of Network Cultures

Shattered Hopes: Obama’s Failure to Broker Israeli-Palestinian Peace by Josh Ruebner
“Taking advantage of treasure troves of new sources, this book provides a welcome clarity that cuts through years of stale disinformation. With the passion of a longtime activist and the rigor of a trained researcher, Josh Ruebner dissects a wide range of sources, including WikiLeaks and the parallel Palestine Papers, to provide a tour de force analysis of Obama’s failed Middle East policy.” – Phyllis Bennis, Director of the New Internationalism Project, Institute for Policy Studies

The Occupation: War and Resistance in Iraq by Patrick Cockburn
“Of the raft of books about the calamitous mismanagement of the intervention in Iraq, The Occupation is probably the most readable and certainly the only one that—even if only in the driest possible way—manages to be amusing.” – Christopher Hitchens

Liberalism: A Counter-History by Domenico Losurdo
“A brilliant exercise in unmasking liberal pretensions, surveying over three centuries with magisterial command of the sources.” – Financial Times

Being Arab by Samir Kassir
“Shortly before his death, Kassir published a remarkable essay exploring what he termed the ‘Arab malaise’ of the twenty-first century. It reflected the disenchantment of Arab citizens with their corrupt and authoritarian governments.” – Eugene Rogan, author of The Arabs: A History

The Case for Withdrawal from Afghanistan edited by Nick Turse
“A fascinating and essential guide which puts the war in Afghanistan in the context of its recent history and dispels propaganda stereotypes about how the US, Britain and their allies became involved.” – Patrick Cockburn, author of The Occupation: War and Resistance in Iraq

America's Kingdom: Mythmaking on the Saudi Oil Frontier by Robert Vitalis
“Groundbreaking is a word too often used in assessing historical scholarship. Yet its application to Robert Vitalis's book is nothing less than a necessity. The result of painstaking research in not only heretofore unused but previously unknown records, the book makes a major contribution to a variety of fields: international history, US-Saudi relations, business history, American race history, and more ... Those seeking to explain the present US place in the world should consider it essential reading.” – American Historical Review

The Revenge of History: The Battle for the 21st Century by Seumas Milne
“Reading Seumas Milne, one often has a feeling of physical relief: finally someone not only sees the truth but articulates it with thrilling erudition and moral clarity. Tracking a decade of ruinous lies from the right and unheeded warnings from the left, this is a book with an urgent message: it’s time to win more than arguments.” – Naomi Klein, author of Shock Doctrine

Messages to the World: The Statements of Osama Bin Laden by Osama bin Laden
“Western media have made no consistent effort to publish bin Laden's statements, thereby failing to give their audience the words that put his thoughts and actions in cultural and historical context ... Bin Laden has been precise in telling America the reasons he is waging war on us. None of the reasons have anything to do with our freedom, liberty and democracy, but have everything to do with US policies and actions in the Muslim world.” – Michael Scheuer

Bush in Babylon: The Recolonisation of Iraq by Tariq Ali
“Hard facts, sharp political analysis and literary insertions that evoke the richness of Arab culture ... unlikely to soothe the middle-class nerves of our harmony-seeking 'Gutmenschen.'” – Suddeutsche Zeitung

American Foreign Policy and Its Thinkers by Perry Anderson
“Anderson is among the most insightful and policy-relevant analysts of modern Europe.” – Andrew Moravcsik, Foreign Affairs

Fanaticism: On the Uses of an Idea by Alberto Toscano
“Succinct yet expansively allusive in scope, dense yet highly readable, Fanaticism is a multi-levelled investigation into the role that the idea of the fanatic has played in political discourse.” – Mark Fisher, Frieze

The Liberal Defence of Murder by Richard Seymour
“Among those who share responsibility for the carnage and chaos in the Gulf are the useful idiots who gave the war intellectual cover and attempted to lend it a liberal imprimatur. The more belligerent they sounded the more bankrupt they became; the more strident their voice the more craven their position. As the war they have supported degrades into a murderous mess, Richard Seymour expertly traces their descent from humanitarian intervention to blatant islamophobia.” – Gary Younge

Dispatches from the Dark Side: On Torture and the Death of Justice by Gareth Peirce
“A timely reminder of the darker side of lawlessness in freedom's name.” – Shami Chakrabarti, The Observer

Border Vigils: Keeping Migrants Out of the Rich World by Jeremy Harding
“...offering a sympathetic portrait of disadvantaged migrants that highlights the ways in which their needs are so often ignored even as their plights were largely created by the very rich countries that they wish to enter.” – Book News

Thinking Past Terror: Islamism and Critical Theory on the Left by Susan Buck-Morss
“Susan Buck-Morss enables us to discover the Islamists as our neighbors: neither as fundamentalist fanatics unable to cope with modernity, nor as the exotic authentic Other, but as people sharing the same global predicament as ourselves.” – Slavoj Zizek

The Islam Quintet by Tariq Ali
“Prompted to start the Islam Quintet by hearing a comment during the Gulf war that Muslims have no culture, Tariq Ali has gone back through different periods of Islamic history to show times when learning and culture were synonymous with Islam—and appreciated as such by the most enlightened Christians.” – Guardian

Polemics by Alain Badiou
“In Polemics, there are withering critiques and witty demolitions of the so-called war on terror, the invasion of Iraq, the bombardment of Serbia and the pantomime of parliamentary democracy … There is a delightful Swiftian satire on the Islamic headscarf affair and a denunciation of the racism that led to the riots in the banlieues late in 2005.” – Simon Critchley, London Review of Books

A Child in Palestine: The Cartoons of Naji al-Ali by Naji al-Ali
“This is a ground-breaking book. For the first time, Western readers are beckoned into Palestinian lives by the graphic warmth, inspiration and horror of the cartoonist Naji al-Ali, whose iconic Hanthala is our witness and conscience, imploring, rightly, that we never forget.” – John Pilger 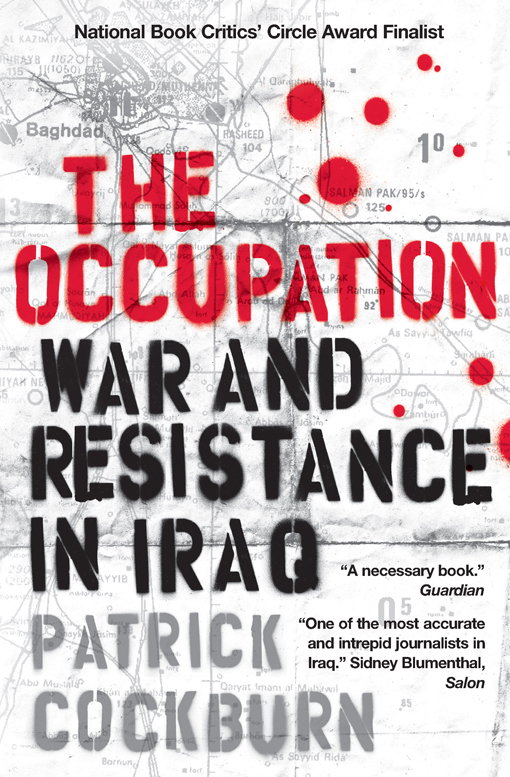 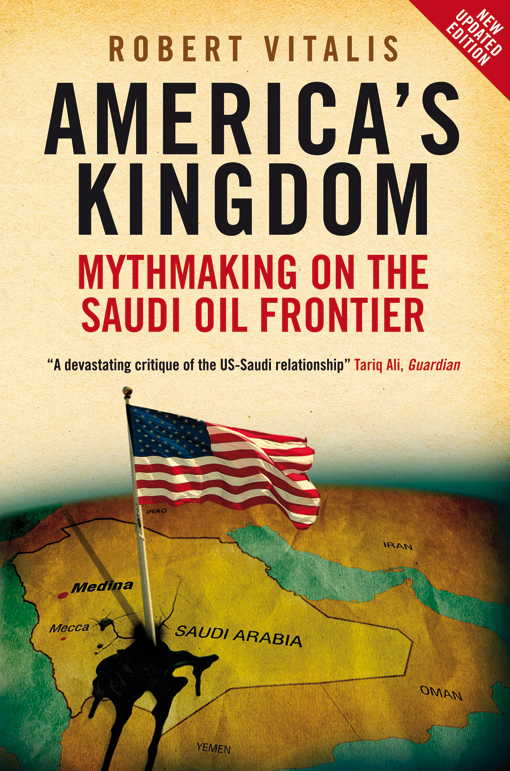