40% off EVERYTHING in our end of year sale!
about 1 month left
Gayatri Kumar
comments

Tariq Ali : "The signs are already on the walls of Europe"

Tariq Ali discusses the upcoming Greek elections, the potential for Left governments in Europe, and the impending demise of the EU. 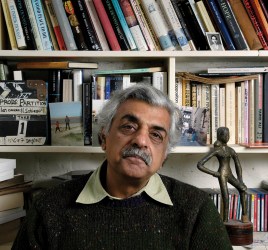 1. For the first time in Greek political history, a radical left party, SYRIZA, is the strong favorite to win the general elections taking place in January the 25th. What kind of reaction do you expect from the neo-liberal Europe and in particular from Germany?

If SYRIZA wins it will mark the beginnings of a fightback against austerity and neo-liberalism in Europe. Two concurrent processes will be in motion from the beginning of the victory. There will be a strong attempt by the EU elite led by Germany to try and tame SYRIZA via a combination of threats and concessions. The aim of this operation is simple. To try and split SYRIZA at a very early stage.

Secondly there will be a high level of expectation from SYRIZA's electorate and beyond. Mass mobilizations will be extremely important to sustain the new government and push it to carry through the first necessary measures. The debt and the readjustment measures must be repudiated immediately before moving on to implement a plan that restores the social gains that have been achieved and are being dismantled by the Troika-led governments. The first three months will be decisive in terms of revealing the contours of the political and economic landscape envisaged by SYRIZA. Neo-liberalism can not be dismantled overnight but the will to do so must be paramount. Bandwagon careerists must not be allowed to sabotage what can and should be done

2. Do you believe that -inside this tight European framework- a SYRIZA government will be able to put forward its political agenda and to implement the promised reforms as a first remedy to the growing humanitarian crisis? Which should be the main priorities and the style of governance by a SYRIZA government? Do you think that SYRIZA, and Alexis Tsipras as their leader, could reshape and redefine the sociopolitical conditions and direction of the country?

Implementation will take time. We know this from the South American experience, but a start has to be made and the leaders have to make sure that all that is being done is in the open. Transparency is a vital ingredient to mass mobilisation and politicization. The more public support that is seen on the streets the more citizens in other EU countries will be inclined to support the Greek demands. Ultimately, in my opinion, if the EU elite/Troika refuse to make meaningful concessions then the only alternative is to defy them and if, as a result, Greece is expelled from the EU (something that would be unconstitutional) then Plan B has to be implemented. A SYRIZA government that allows itself to be effectively blackmailed by the EU will run the danger of being Pasok Mark 2 and that would be a huge disaster for Greece and Spain. I don't think this will happen and I think Alexis Tsipras will resist the EU apologists within his own ranks, but the pressure will be huge especially from the Germans for whom the Monetary Union has acquired supernatural status. As the EMU is obviously not working it needs to be carefully dumped. The rise of German nationalism must be of concern to the elite and PEGIDA is a clear warning.

3. What is your view of the current sociopolitical situation in Greece?

The situation is polarised. The fascists of Golden Dawn and the Conservative descendants of the wrong side in the Greek Civil war have the support of a sizeable section of the Greek population. This cannot be ignored and we do so at our peril. The emergence and growing support for SYRIZA (and PODEMOS in Spain) is the post positive development in Europe, but in order for it to move another step forward without moving backwards it will have to challenge the Greek oligarchs, confront the ship-owners mafia that owns the media, that pays few taxes, if any, and also to remove the tax free status of the Orthodox Church. Its not that the Church is poor. Its ownership of property makes the institution an oligarch in its own right. In the case of the ship-owners they must be compelled to pay taxes in retrospect so that the country can move forward economically again and start functioning properly. Such a move will annoy the more backward sections of the EU elite but will be popular in Europe as a whole and will lay the basis for a political battle with the Troika by splitting their supporters.

4. Do you think that a SYRIZA win in the upcoming elections could initiate a domino-effect in Europe, so that, other EU people begin to support and elect (radical) left parties to govern their countries?

Definitely. This will be the impact because SYRIZA will be the first party in Europe elected to power that has done so by challenging the extreme centre that rules Europe and its favoured economic system: a financialised neo-liberalism. With the regional elections in Spain in May we might see an interesting chain reaction and who knows, perhaps the far-left in Portugal and the Left Party in Germany might realize that clinging on to the coat-tails of social-democracy is a recipe for decline and disaster.

5. Migrants in Greece, Spain, Italy and other EU states are gathered in migration camps, under very adverse conditions. How could Left governments in Europe face the migration issue, given the very strict European legal framework?

Immigration has become a huge issue because of austerity measures, unemployment, precarious working conditions, etc. The European legal framework (Fortress Europe) is racist as far as non-Europeans are concerned. Syriza and Podemos should openly defend the rights of people whose lives have been wrecked by a US/EU supported planetary globalization. If resources 'are released for improving the lives of actually existing citizens it will make it easier to provide help and legal rights for the migrants. When some European politicians from the extreme centre parties justify the deaths by drowning in the seas surrounding Europe on the grounds that this will discourage other immigrants it is not simply the inhumanity that one notices; it is a total failure to understand why people migrate and who creates the conditions. Economic and climate catastrophes coupled with wars initiated by the West are usually the cause in recent years, a classic case is the expulsion of Africans from a post-Ghaddafi Libya created by NATO, many of whom then regrouped in Mali followed by a French military intervention in Mali to save the government.

6. Financial markets are considered to be the omnipotent regulators of politics and democracy itself in some cases. Could it be possible for a left government to clash with market system within the capitalist framework?

Yes, that is what is on the agenda today and what the Bolivarian governments in South America have been doing for the last fifteen years with relative success. Market-fundamentalism has led to a sharp decline in democracy (Wolfgang Streek, the German sociologist has explained the process of decline very well in his books and essays) and the Wall Street crash of 2008. What is needed is a combination of regulation, state intervention to take back the public utilities and create and own industries that can help fund the former andsenhanced democracy on every level to ensure popular participation.

This can be our only minimum programme at the present moment.

7. What is your prediction about the future of the European Union?

It's in a very bad state. It subordinated politics to economics and was undemocratic from the very beginning. Blaming 'lazy Southerners' for the crisis is grotesque. Its not just the Left which argues this (in fact the Left has been with some exception very weak on the EU), but hedge-fund kings like George Soros who recently said: "My worst fears are confirmed...This is what I was afraid of, that the Euro would be preserved. ...pervert the venture, and destroy the European Union. Instead of the solidarity (the EU) was supposed to have embodied, it became every country for itself." And Pope Francis in the Vatican, to the left of every EU govt today proclaimed that: "The great ideas that inspired Europe seem to have lost their attraction, only to be replaced by the bureaucratic technicalities of its institutions." The single-formula approach on the currency union is dead in the waters of the Mediterrenean. An alternative needs to be developed. It would be better if this were done by common agreement, but that is unlikely so new radical governments might have to take unilateral decisions.

I do not think that the EU as constituted at present can last too long. The danger is that if the situation continues as is the governments of the far-right will emerge and so the business putting into the mixture: immigration, the Roma, Islamophobia, etc. The signs are already on the walls of Europe.