Shlomo Sand: 'I am not Charlie' 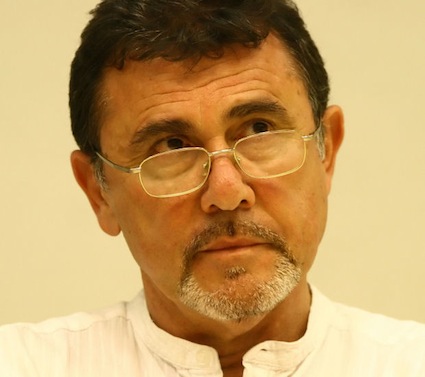 "Reading the Koran is a disgusting experience. Ever since Islam’s birth it has been distinguished by its desire to make the world submit to itself. Submission is its very nature."- Michel Houellebecq, 31 August 2001, speaking to Sébastien Le Fol and Anthony Palou

Nothing can justify a murder, still less a mass murder committed in cold blood. That’s what happened in Paris at the beginning of January: an absolutely inexcusable crime. There’s nothing original about saying that: millions of people already think and feel the same, and rightly so. But seeing this terrible tragedy, one of the first things that came to my mind was this: does the deep disgust we feel when faced with a murder necessarily oblige us to identify with the victims’ actions? If – as President Holland declared – the victims are the supreme incarnation of freedom of expression, then do I have to be Charlie, too? Am I Charlie, not only because I am a secular atheist, but also on account of my fundamental antipathy toward the oppressive bases of the three great Western monotheist religions?

Some of the caricatures I saw in Charlie Hebdo – long before the shooting – seemed to me to be in bad taste; only a minority made me laugh. But that’s not the problem. In the majority of the magazine’s cartoons about Islam that came to my attention over the last decade, what I saw was manipulative hatred, mainly designed to appeal to its (obviously, non-Muslim) readers. I thought Charlie’s reproduction of the cartoons from the Danish newspaper Jyllands-Posten was deplorable. In 2006 – yes, already back then – I thought that the drawing of Mohammed wearing a bomb as a turban was a pure provocation. It wasn’t so much a caricature attacking Islamists, as a stupid reduction of Islam to terrorism; it’s a bit like identifying Judaism with money!

Some say that Charlie took on all religions indiscriminately, but what does that really mean? Certainly it did mock Christians and sometimes Jews. All the same, neither the Danish paper nor Charlie would go so far – fortunately enough – to publish a caricature presenting the prophet Moses as a crafty usurer loitering on a street corner in a kippah and tassels. It’s a good thing, indeed, that in what people today call ‘Judaeo-Christian’ civilisation it’s no longer possible to spread anti-Jewish hatred in public, like it was in the distant past. I am for freedom of expression, but at the same time I’m against racist incitement. I’ll admit that I’m happy to go along with the ban on Dieudonné publicly expressing his ‘critique’ and his ‘banter’ about Jews. However, I am absolutely opposed to him being physically assaulted, and if by chance some idiot did attack him, I would be very shocked… but then again, I wouldn’t go as far as waving a placard around bearing the words ‘Je suis Dieudonné’.

In 1886 Paris saw the publication of Edouard Drumont’s La France juive [‘Jewish France’], and in 2014 – on the same day as the three criminal idiots’ attack – a book came out with the title Soumission: Michel Houellebecq’s very own ‘La France musulmane’ [‘Muslim France’]. The pamphlet La France juive was a real bestseller at the end of the nineteenth century, and so, too, was the novel Soumission, even before it hit the shelves! In their respective eras, each of these two works got a warm welcome from the papers. Of course, there are many differences between them. Among other things, Houellebecq is well aware that at the beginning of the twenty-first century it’s forbidden to whip up talk of a Jewish threat, but it’s very much allowed to sell books warning of the dangers posed by Islam. Alain Soral is less crafty and hasn’t realised that yet, and for this reason he’s been marginalised in the media… and a good thing, too! Conversely, Houellebecq has been invited with full honours onto the state television channel’s 8pm news programme, even though his book also spreads fear of Islam.

An ill wind, a foul-smelling wind of dangerous racism is spreading across Europe: and there is a fundamental difference between having a go at a society’s dominant religion or belief, and attacking or inciting hatred against the religion of an oppressed minority. If, within Jewish-Muslim civilisation – in Saudi Arabia, or in the Gulf States – there today arose protests against the dominant religion for oppressing thousands of workers and millions of women, it would be our duty to support the persecuted protesters. And as we know, far from encouraging the ‘Voltairians and Rousseauians’ of the Middle East, the Western leaders give their full support to the most repressive of religious regimes.

But in France or Denmark or Germany or Spain, where there are millions of Muslim workers – mostly burdened with the most thankless tasks, and standing at the bottom of the social scale – we have to show the greatest prudence before criticising Islam. And, above all, avoid crudely ridiculing it. Today, particularly after this terrible massacre, my sympathies lie with the Muslims in the ghettos on the city peripheries. They face a serious threat of becoming the second set of victims of the murders perpetrated at Charlie Hebdo and the Hyper Casher supermarket. I continue to take the original ‘Charlie’ as a model: that is, the great Charlie Chaplin, who never mocked the poor and uneducated.

Moreover – and knowing that every text is part of a context – we have to ask ourselves how come so many French soldiers have headed for Africa to ‘fight the jihadists’ in the last year or so, without there being any serious public debate in France on the utility or damaging results of these military interventions. The colonialist gendarme of yesteryear – whose responsibility in leaving a chaotic legacy of borders and regimes is beyond question – is today ‘called back’ to re-establish ‘law and order’ with the help of its neo-colonial gendarme force.

It took part in the military coalition in Iraq, side-by-side with the pyromaniac American ‘firefighter’: that is, in an intervention which is to blame for the chaos that has been created in that region, and in particular the rise of the terrifying Daesh. An ally of the ‘enlightened’ leaders of Saudi Arabia and other keen partisans of ‘freedom of speech’ in the Middle East, it has fought to preserve the illogical borders it imposed a century ago, when it carved up the region in accordance with its imperialist interests. Its vocation is to bomb those who threaten the precious oil wells whose product it so enjoys – and it doesn’t understand that in so doing it invites the threat of terror striking the metropolis itself.

But maybe the enlightened West really has understood… perhaps it’s not the naïve, innocent victim it likes to claim! Of course, only a cruel, wicked murderer could kill unarmed innocents in cold blood; but you would have to be a hypocrite or plain stupid to close your eyes to the context in which this tragedy has taken place.

It is also blind not to understand that this situation of conflict will only get worse if we do not join together – both atheists and believers – with a commitment to developing real perspectives for living together without hatred for the other.