A brief note from afar on the Greek election campaign from Stathis Kouvelakis: Toward - and for – a ‘Syriza landslide’!

With Sunday's election approaching, the political theorist and leader of Syriza's Left Platform Stathis Kouvelakis comments on the movement and what's at stake, not only for the people of Greece but also for the rest of Europe. 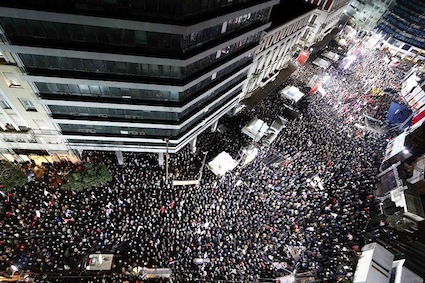 I’ll make a few brief remarks on the Greek election campaign and the situation within Syriza, in order to help overcome the frustration of not being there. I reckon these comments are relatively ‘cool-headed’ – distance allows for that, at least.

1. The signs I’m getting from friends and comrades, in both Athens and the rest of Greece – corroborated by ‘local’ surveys (for the regions and major cities) – are all pointing the same way. It looks like there’s a wave of support heading Syriza’s way this Sunday. In the working-class districts of Athens the Right faces an utter rout. Meanwhile, outside the capital whole chunks of the right-wing electorate are now breaking for Syriza, following former PASOK voters. There is a calm atmosphere in the country, but at the same time real expectation is mounting. The conditions are ripe for a dynamic to build behind Syriza.

2. From a political point of view the Greek bourgeoisie and its political representatives are stunned and voiceless. All their hopes of heading off Syriza rely on Europe’s leaders – and ruling classes. For their part, the line seems clear enough: it is the politics of the ‘iron cage’, seeking to shut down a Syriza government as quickly as possible. The spearhead of this effort is the attempt to force Syriza to request an extension of the current ‘assistance programme’, which runs out on 28 February.  Such an extension would allow continued financing, and thus for the debt to be repaid, but also implies continuing with the current policy and the country being subject to Troika discipline – perhaps under mildly reworked terms.

3. That’s the context for the ECB decisions on ‘quantitative easing’ that was announced yesterday. The inclusion of Greece in the public debt-buying programme requires that it accept an ‘assistance programme’ (the bonds to the Greek debt are considered as ‘junk’ and don’t fulfil the conditions of a standard buyback), and it will not happen before July, when Greece will be ‘reviewed’ to check its results. This means that until then, Greece will have to continue repaying its debt, including the 7,5 billions of repayment due in July and August. As the existing budgetary surpluses are clearly insufficient and the country doesn’t have access to international markets, this in turn is practically conditioned to an extension of the current 'assistance programme”. Fundamentally, the same goes for the ECB giving its authorisation for Greek banks to access liquidity through the ELA mechanism. It has to be renewed every 15 days and requires the continuation of the ‘assistance programme' (as we see, now you’re not meant to say ‘Memorandum’, but 'assistance programme'). But the substance remains the same: the ‘iron cage’ of debt peonage and austerity politics has to remain untouched.

4. Syriza’s intentions faced with these difficulties (which in their broad terms were wholly predictable) are unclear. The main thrust of its election campaign has been to ‘reassure’ the moderate and undecided voters on which it’s been focusing. Syriza has spread the image of a ‘Europe that’s changing’, indeed at high speed as suggested by one of the campaign tv adverts, and which is prepared to accede to its demands. In recent days statements coming from Syriza leaders – particularly its main economists (Dragasakis, Tsakalotos) but also Tsipras’s ‘right-hand man’ Nikos Pappas, who is head of his personal staff – suggest that Syriza would agree to requesting a ‘technical’ extension of the current ‘assistance programme’ in order to ‘allow time to negotiate’. They make no mention of the conditions that would be placed on this so-called ‘technical’ extension, however.

5. So here we have a tangle of contradictions, which in their different ways define Syriza’s trajectory and the Greek situation as a whole. Already between the two elections in May and June 2012, pretty much the same Syriza figures (above all Dragasakis) distanced themselves from the party line and rejected the idea of ‘unilaterally’ cancelling the Memorandum. At that time Dragasakis made some fatuous distinctions between a ‘political’ rejection of the Memorandum and a ‘juridical’ one, this latter amounting to ‘unilateral actions’ which he repudiated. Such statements were very costly for Syriza at the time, in that they gave the impression that the party had kept its plans intentionally vague and thus suggested that it would capitulate on the decisive questions. But ultimately in 2012 his wasn’t the line that prevailed. What about now? That’s perhaps THE essential question.

6. While being perfectly aware of its contradictions, we should not have the slightest hesitation in laying our hopes on not simply a Syriza victory, but a Syriza landslide.

-       Such a victory would give it a parliamentary majority and prevent any possibility of an alliance with buffer formations, which are the system’s pawns in trying to force a Syriza government to make concessions.

-       Such a landslide would give confidence back to the most conscious layers of society and would allow for popular mobilisations to get going again. That, of course, is the key variable. Ultimately that will be the barrier against the temptation to retreat or give in.

-        Finally, such a landslide would have a very significant international impact. On the governments, and on the whole social and political Left that’s rightly placing its hopes in Syriza and which wants to support Syriza in its struggles.

We can never say it enough – what’s at stake on Sunday is enormous, it’s of truly historic proportions. It would be the first decisive break with neoliberalism in Europe. And an extraordinary opportunity for the ‘Left of the Left’ to shake off the curse of its worst defeats – the battles that it lost without a fight.

So we are left with only one option: dare to fight, dare to win!

A interview with Stathis Kouvelakis by Verso's Sebastian Budgen was recently published in Jacobin. Read the full interview here.

For more on the crisis of capital and its alternatives see our Post-crash Economics Reading List.