The Associate Professor of Comparative Political Analysis at the Athens Panteion University’s Department of History and Political Science and author of In the Name of Social Democracy assesses Syriza's journey to government. 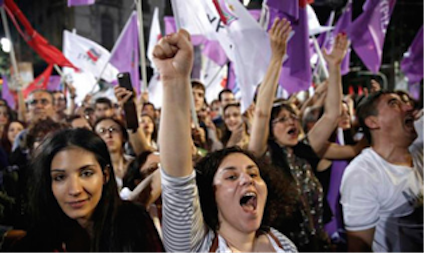 No European country has been plunged so deep into crisis as Greece, which has experienced a situation analogous to that of the 1930s. If the images coming from Greece today don’t correspond to the 1930s picture of social carnage and extreme human suffering, it’s thanks to the Greek welfare state – which, so maligned by certain analysts, has in fact carried out its social-protection role relatively well.

In periods of great crisis, voters’ political shifts are motivated by disillusionment, anxiety, anger, but also a party’s capacity to offer a different perspective for resolving the crisis. The depth of the crisis shakes up traditional behaviours and undermines the importance of the classic ‘Left/Right’ axis. Syriza hasn’t become a major political force in Greece because it has adopted a moderate, centrist policy – and while a lot of observers do think this, they are mistaken. Syriza’s politics are very composite. Certainly, it has become gradually more moderate, but it has largely based itself on the principle “I won’t tail the electorate – rather, I’ll win it to my side, and push it further to the Left”. The Troika’s tragic errors – which all specialists now recognise – have helped Syriza’s unprecedented, risky strategy along its way.

In 2009 Syriza was a protest party, and indeed a very heteroclite confederation of small left-wing organisations. This post-communist confederation had little programmatic coherence, and ideologically it was often sectarian. Its systematic attitude of ‘protest’ and its ultra-‘anti-neoliberal’ rhetoric (Syriza criticised everything that moved as ‘neoliberal’) were the two fundaments of a political radicalism lacking in any ideological or programmatic depth. When the debt crisis broke out this naïve and yet well-worn party – a both very modern and paleo-communist organisation – had not elaborated any idea of how to deal with this central question.

However, a very interesting debate was taking place within Syriza, centred on the question of whether Greece should continue with its euro membership. This debate was not taking place in the rest of society, but principally involved a small number of economists who were either Syriza members or close to the party. This was a debate of very high quality – on both sides – and it surreptitiously laid the ground for Syriza to mature as a political force. From that point onwards Syriza’s internal life has been characterised by a majority taking a critical pro-European position (but a more coherent and solid one than the party had in the past, as it now took to the offensive) as well as a strong anti-EU minority clearly asserting itself. This division has been the source of a constant tension and an incoherent discourse that Syriza’s political enemies constantly attack. However, paradoxically enough it was also a force for a deepening and refinement of the party’s programmatic statements, which had previously been too superficial.

Adding to this maturation-through-division were the party’s strong results in the two 2012 elections. The May-June 2011 city-square occupations movement, a powerful social catalyst, had dealt a decisive blow to the PASOK government and the legitimacy of the Memorandum policies. And the May 2012 vote (Syriza went from 4.6% in 2009 to 16.78% in May 2012 and 26.89% in June of that same year) was the moment of Alexis Tsipras’s breakthrough. This was a real political tour de force. The party’s central slogan, ‘We don’t want you to vote as a protest, but so that we can govern’ proved extraordinarily successful. Tsipras – who is an effective leader but not a charismatic one – shook up the rules of the game, surprising the old parties’ elites but also his own electorate and his own cadres. With his ‘crazy’ approach the Syriza leader succeeded in striking a highly audacious blow against his comrades’ grey, complacent mediocrity, and most importantly in sparking a mass movement of people joining the party. What had been simmering on the underground, in an informal way, was now transformed into a powerful political and electoral dynamic. That was the moment that the new Syriza – the Syriza that aspired to become the majority – was born. This was the second stage in the process of the party’s ideological and programmatic maturation.

Coming closer to power has doubtless accelerated the party’s programmatic development in the direction of favouring ‘realistic’ solutions to the detriment of easy ‘protest’ strategies. This third stage of the party’s maturation – which is still underway – was put to the test in the 25 January elections. As the political scientist Pascal Delwit has underlined, both Syriza’s percentage (36.34%) and parliamentary representation (149/300 seats) far surpassed the best efforts of the Italian and French Communist Parties in their heyday.  However, though a powerful force among the popular classes Syriza does not have the organisational density, local rooting or big trade-union battalions that the old mass CPs did.

Syriza’s current identity as an organisation and in terms of the composition of its membership is characteristic of a party of the new radical Left, while its proposals in terms of economic policy (and its policy toward Europe) include important elements of social-democratic reformism. Certainly, analyses that consider Syriza ‘populist’ do – rightly - emphasise that its discourse has ‘populist’, or more precisely, demagogic aspects. Indeed, Syriza has sucked up to numerous professional groups, and not sufficiently taken its distance from those who took part in the frantic ‘splurge’ when times were good. All the same, Syriza’s continuing link with Marxism, its anti-nationalist culture, its immigration policy, and its organisational model’s anti-hierarchical culture all militate against its transformation into a populist party of the Left. And even more so its transformation into a ‘national-populist’ party.

Syriza represents a sort of left social-democracy with populist and ‘movementist’ accents. However, its ‘social-democratic’ politics are indeed radical, because they go far beyond what is allowed within the European Union. It is in this sense that what is happening in Greece is of historic importance, since it could allow the Left in general to get back on track – and in a different way to before. And this is even an opportunity for social democracy to renew itself, having proved essentially unable to produce any response to the crisis other than the dominant one.

The Syriza government will face great difficulties in getting around the EU’s institutional and political ‘conservatism’ without abandoning its left-wing politics. Syriza sincerely wants to reach an agreement with the EU and the creditor countries, and its programme is built in such a way that compromise is possible. However, giving in without a fight is not Tsipras’s style. Caught between the demands of his party’s Left wing and the inflexibility of the arrogant, polycentric EU order, he will try to get a ‘satisfactory’ deal. And if that proves impossible, it is very likely that he will choose a test of strength rather than accept humiliation. It’s in this sense that he is no ‘moderate’ or ‘social democrat’.

In opposing EU policies, Syriza will test not only the limits of the European Union itself, but also the limits of its own identity. The well-known problem of how to square the circle is yet to be resolved.

[*] This piece was originally published in Le Monde with a tendentious title, despite the author’s protests. The present version is slightly modified.