'Greece: towards a head-on crash'

Yesterday Greek Prime Minister Alexis Tsipras made his first policy speech in the Voulí ton Ellínon, standing firm in his position on debt and austerity. Following on from his excellent analysis of the Greek election results, Stathis Kouvelakis considers Tsipras's programme. 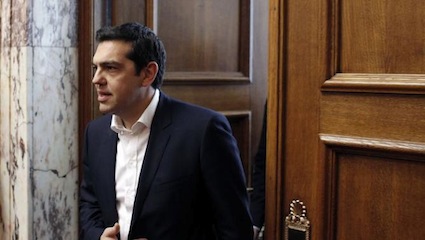 Tsipras’s inaugural policy speech before the Greek Parliament was followed particularly attentively within Greece as much as in the European chancelleries – and no doubt in the White House too. Within Greece, after the ECB’s blackmail and the continual attacks by the European leaders, there is a spreading mood of mobilization, of regained dignity, of a desire both to support the government in the face of the blackmail and to put pressure on it to halt any retreat. Externally, and more specifically within the governing European circles, every word and above all every measure announced were weighed up to seek to gauge the determination of the prime minister and his government. Most expected a significant shift, prefiguring a retreat, which would facilitate a “compromise” during the European summits this coming week, which would in reality signify Greece’s submission to their diktats. In this they were undoubtedly disappointed. For Alexis Tsipras, in truth, made no fundamental concessions. To be sure, he avoided using the term “cancellation of the debt”. But he strongly insisted on its unviable character and demanded its “reduction” and “restructuring”. True, he also failed to announce the immediate reinstatement of the minimum wage to its 2009 level (751 euros) but he did commit to doing so during 2015. As for the rest, he went through all the points of the Thessaloniki programme: emergency measures to deal with the humanitarian disaster (food, reconnecting electricity, transport and medical coverage for all), reinstatement of labour legislation, disbandment of unjust land taxes, fiscal reform to make the rich pay, a rise in the tax threshold to 12,000 euros, rehiring the sacked public sector workers, an end to privileges for the private media companies, reconstitution of ERT (the public radio and TV company), activating the powers that the state has as a shareholder in the banks, a stop to the auctioning off of public assets (ports, infrastructures, energy), a end to police repression of demonstrations.

There was one very symbolic reform: that of nationality law, in order to accord citizenship to all immigrant children born in Greece, about whom he waxed lyrical. He also stressed at some length the role of newly created ministry of immigration, whose function in the protection of human rights and personal dignity he underlined, whilst also demanding a change in European policy in this field. Proof, if such was need, that the participation of the Independent Greeks (ANEL) in the government has not modified Syriza’s position on these questions.

In reality, the hard core of the Memorandums was swept away. The break with austerity politics is effective. And Alexis Tsipras drove the point home in several ways. First, he explicitly referred to the role of mobilisations in Greece and to international solidarity, which he saluted emphatically, in the battle that the government is waging. He was very firm that the reestablishment of national and democratic sovereignty and of the dignity of the Greek people are non-negotiable. In the current context, this is the equivalent of calling on the people to take to the streets to demonstrate, and I have no doubt that it will be heard both in Greece and in the rest of Europe.

Moreover, at the end of his speech, aptly characterized as “defiant” by Helena Smith in the Guardian, after a long tribute to the long history of struggles of the Greek people, he put back onto the table the question of German war reparations and put Manolis Glezos a the end of such a process to be pushed forward by the government. We are all aware that this subject is like a red rag to a bull for the German governing classes.

Broadly speaking, Alexis Tsipras sent out a message of firmness and combativeness both internally and externally. He has disproved those who were already wagering on a slippery slope towards capitulation. It seems out of the question that the European leaders will tolerate in any shape or form the policies that he proposed today to the Greek parliament.

We are thus indeed in a situation of outright confrontation, which will take a decisive turn during the coming week, with the conjunction of European summits and street demonstrations. We are indubitably on the eve of great events, events which may transform the current course of things in Greece and in Europe.

With the combination of the determination of the Greek governmental leadership, the mobilisation of the people and international solidarity the “magic equation” of a possible victory is now at hand!

For more on anti-austerity in Greece and Europe see our Syriza Against Austerity and the Troika Reading List here.