'On the razor's edge' by Stathis Kouvelakis

Following yesterday's commentary on the Eurozone discussions, Stathis Kouvelakis analyses the leaked documents and contemplates what they could mean for the Syriza government and the people that brought it to power. 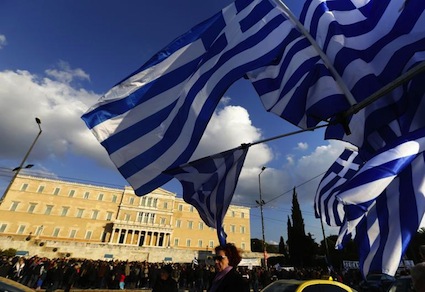 To use a worn-out cliché, “the times are critical”. In fact, they are more than just that: we are at the edge of a crucial temporal sequence. The whole endeavour of a Syriza government will be judged by its reaction to the unprecedented blackmail and ultimatums it is receiving from its tragically misnamed European “partners”.

And the news from the frontline is not pleasant. To be sure, it is very difficult to have a clear view of the current status of the negotiations – “negotiations” being a oxymoron given the sheer asymmetry in the balance of forces, and the fact that one side has a gun (the ECB’s) pointed at its head. What is clear, however, is that the Greek government has backtracked on crucial aspects, especially concerning its commitments towards the people that brought it into office. Before examining the substance of the request for an extension of the Master Financial Assistance Facility Agreement submitted on Wednesday by the Greek government to Brussels, let´s have a closer look at the “Moscovici document” leaked by the Greek government during the Eurogroup meeting last Monday, which it has declared itself willing to sign.

This document[1] rules out “unilateral action”, sets primary surpluses of an undefined volume as a budgetary target and recognizes the entirety of the debt. All future adjustments made concerning the restructuring of the debt will have to be in line with the Eurogroup´s decisions in November 2012. Essentially, the implementation of the fundamental measures of Syriza´s Thessaloniki election programme is made subject to the prior approval of the lenders; effectively amounting to the programme´s annulment. Additionally, it recognizes the odious terms of the lending agreements, thereby further weakening the Greek negotiating position on the matter. It is obvious, that by accepting such a framework as a supposedly “honourable compromise”, the Syriza government is having its hands tied.

The request for an extension of the “Master Financial Assistance Facility Agreement” submitted Wednesday by Yanis Varoufakis, includes all of the above mentioned points and adds to those - for the first time - the recognition of “the supervision under the EU and ECB framework and, in the same spirit, with the International Monetary Fund for the duration of the extended Agreement (point f)”[2]. In other words, the Troika is back but with a different name. The Greek media have already started talking about “the Institutions” (with a capital “I”).

But even that is not enough for the EU and Schäuble. Having understood that the Greek side - eager to avoid any rupture and even any unilateral move - is on a constant path of retreat, the “partners” have opted for total surrender as their primary aim. By teaching the Syriza government a lesson, they simultaneously issue a warning to Podemos and any other force in Europe that may attempt to challenge austerity, the memoranda and debt-peonage. The German side has either way rejected the Greek request for the Master Financial Assistance Facility Agreement, apparently aiming for further Greek concessions and the full humiliation of the Greek left-wing government.

And herein, maybe, lies hope. It can´t be ruled out that the escalating demands of the EU and the lenders will be rejected by a government that has undertaken some basic commitments to its people. And, more importantly, that they will be rejected by a people that is believing in hope again and taking to the country´s streets and squares. A retreat should not be treated as unavoidable, and the Greek government deserves support to the extent that it is holds firm in the war unleashed against it. Whatever the conclusion, one thing is certain. All the reassuring arguments that have circulated in the past few years - about a European “bluff”, about the possibility of overthrowing austerity within the Eurozone framework, of separating lending agreements and memoranda, of solutions in the lines of the 1953 London conference on the German debt (that is, of a favourable restructuring for the borrower agreed by the lender) - in other words the constituent elements of the narrative of the “good Euro”, have all collapsed. At some point, we are owed explanations about all this as well.

[1] The full document was posted by journalist Paul Mason here.

[2] The full text of Varoufakis’s text is available here.