In this interview originally published in Nouvel Observateur, the political theorist and member of Syriza's central committee, Stathis Kouvelakis looks at the origins of the Syriza phenomenon. 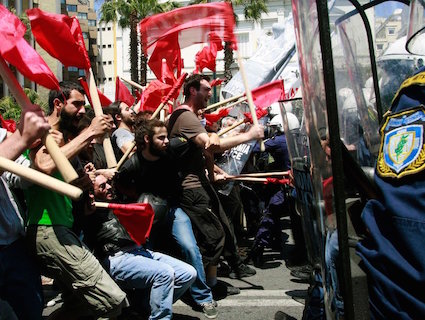 Protesters clash with policemen during riots at a May Day rally in Athens, 2010


Éric Aeschimann: Alexis Tsipras, leader of the radical Left party Syriza and new Prime Minister of Greece, is engaged in an unprecedented tug of war with Europe. As a member of the Syriza central committee, do you think that he will be able to resist the pressure from his European partners?

Stathis Kouvelakis: Last Sunday Tsipras gave his speech to the Greek Parliament outlining his overall policy, and a lot of people were expecting to see early signs of a retreat, or even Greece’s submission to the Troika (the European Commission, IMF and European Central Bank). But that wasn’t at all the case. Tsipras made no important concessions. Yes, he did avoid speaking in terms of ‘cancelling’ the Greek debt. But he insisted that it is unviable, and demanded its ‘reduction’ and ‘restructuring’.  And while the minimum wage has not immediately been brought back up to its 2009 levels (when it stood at 751 euros a month, as against 480 today), he has promised to achieve that this year. Apart from that he repeated the points of the ‘Thessaloniki programme’: emergency measures to help the poorest (food aid, turning their electricity back on, free bus passes, and medical cover); the re-establishment of workplace legislation (in particular the collective bargaining conventions, which the Troika had made only optional); getting rid of punitive housing taxes; tax reform to make the rich pay their way; bringing the income tax threshold back up to €12,000 a year; the rehiring of laid-off civil servants; abolition of the privileges given to the private media, and the re-constitution of the ERT (the state broadcaster); a stop to privatisations; and an end to police repression of the people’s demonstrations.

How is such a programme going to be funded?

Alexis Tsipras has confirmed that he will be scrapping the Troika-imposed ‘assistance programme’. Moreover, he has demanded an extension of the liquidity supplied to the Greek banks – including the return of the profits the Eurozone’s central banks have made on the Greek debt. He has emphasised the need for a balanced budget but rejected the idea that Greece’s primary surpluses should be devoted ad vitam aeternam to paying off the debt.  Since there seems to be no chance of Europe’s leaders accepting even part of this working programme, we are dealing with a logic of confrontation.

So does that mean a rupture?

Over the last two weeks Syriza has met with flat refusals from Europe’s leaders; this together with the ECB’s decision to shut off one of the taps financing the Greek banks has shown the real nature of the European institutions: they are there to impose austerity policies, without any consideration of elected governments’ democratic mandates. Tsipras has repeatedly stated that the Greek people’s dignity and democratic and national sovereignty are non-negotiable. Add to that the fact that he has brought up the question of the loans that the Nazi occupier forced Greece to give Germany, and which have never been paid back. The 92 year old Manolis Glezos was made head of the delegation responsible for presenting this repayment demand. He is a legendary figure in Greece: as a young patriot in May 1941 he tore the swastika flag down from the Acropolis. This was the first act of the Greek Resistance. These are just some of the declarations making up nothing less than a call to popular mobilisation. We are perhaps standing on the eve of important events that will change how things work in Greece and in Europe as a whole.

After being a young Communist activist, you took part in the founding of Syriza. What are this party’s origins?

Syriza is the fruit of a recomposition process that transformed the political space to the Left of social democracy, from the 1970s onward. The unique thing about Greece is that this ‘Red’ Left coming out of the Communist tradition has always remained a powerful force, such as to allow the kind of dynamic that led to the 25 January election victory. This recomposition process revolved around the gradual separation of the historical Communist Party into two branches. On the one side, its Stalinist wing, which still exists (the KKE, which scored 5.5% at the recent election), and which is very hostile to what Syriza is doing. On the other side is a heterodox tendency that broke with the Soviet model and then gave rise to Syriza in 2004. It has proven able to attract other forces on the Left: firstly some of the formations of the far Left; then the alter-globalisation movements, feminists and ecologists; and more recently those who feel betrayed by PASOK and citizens who have got involved in politics during the debt crisis.

Elsewhere in Europe the Communists have lost most of their influence. In Greece, conversely, they make up the backbone of a new party. How would you explain this?

In Greece the Communists were in the front rank of the people’s struggle against the colonels’ regime, in particular the Athens Polytechnic uprising of 1973. The bloody repression of these student protests precipitated the fall of the dictatorship. With the return to democracy the following year the Communists enjoyed immense prestige, and each year a mass march honours the memory of the student revolt. The part of the Left rooted in the old Communist Party has always received between 8 and 15 percent of the vote; but there was a parting of the ways within this bloc, separating the heterodox current from a KKE trapped in a sectarian and Stalinist approach. Another important consideration is that the heterodox tendency in Greece, unlike the French Communists for example, has refused to enter into a deadly alliance with social democracy. Syriza has become a credible alternative by simultaneously both avoiding sectarian isolation and refusing to become anyone else’s bag-carriers.

How has PASOK – a party we often identify with the Parti Socialiste – changed across this period?

It is actually more comparable to the Mexican Partido Revolucionario Institucional, since PASOK sank deep roots in the Greek state. And this state is not based on the Western European model. Having emerged from a military triumph – with the end of the civil war in 1949 – it based its authority on patronage networks and its ability to hand out sinecures. Public spending long remained at very low levels, and only in the 1980s did PASOK implement a real healthcare and pensions system. Which explains why for a long while it really was popular. But it did so without increasing taxes to pay for this rudimentary welfare state. That’s how the debt started to take off. Starting from 1996 PASOK prime minister Costas Simitis liberalised the financial system. Everyone started to play the stock market, and the housing market soared; the 2004 Olympic Games held in Athens were the apotheosis of this artificial enrichment of the country. Simitis airbrushed the public accounts in order to qualify Greece for euro membership, with Goldman Sachs providing a helping hand. That was the golden age of financial globalisation… but also of the alter-globalisation movement!

How did these ex-communists react to this new form of protest?

Syriza’s success was in allowing the new social movements to feed into it, and this was a decisive factor in the dynamic leading to its victory. For instance, since 2010 informal solidarity networks formed (such as mutual aid networks and social heath centres) creating a pool of activists part of which joined Syriza. In Greece joining or supporting a political party is quite normal. As is voting – the turnout for student elections is around 70 percent! Even a section of the anarchists, who are very active in the solidarity networks, support Syriza. In Exarchia, the ‘anarcho’ neighbourhood of Athens, Syriza won easily.

How did a protest coalition turn into a party of government?

It all took off with the occupation of Syntagma Square in spring 2011. At that time large sections of society saw their world crumbling. This movement had a ‘plebeian’ aspect, with the participation of workers, state employees, and members of the middle classes hit hard by crisis. Syriza made a real effort to listen to this movement – not trying to manipulate it, but offering it a way forward politically. An analysis of the 25 January election results shows that the party has considerably increased its implantation in rural areas as well as in working-class neighbourhoods. In Crete it dislodged PASOK, and in the Piraeus constituency no. 2 where the dockers have always voted for the KKE, that party slumped to 8 percent while Syriza got 42 percent. Conversely, in Athens’ trendy Kolonaki district and in the bourgeois suburbs the Right was on the rise: Syriza isn’t the bobos’ party! [bobos = bourgeois-bohêmes, very roughly similar to hipsters].

From France it’s troubling to see Syriza allying with the nationalist Independent Greeks (ANEL), a party known for its xenophobic positions and links to the Orthodox Church…

Tsipras answered this concern last Sunday, when he announced that citizenship would be granted to all immigrants’ children born in Greece. He emphasised the new immigration ministry’s mission of protecting human rights and people’s dignity. Which is proof if it were needed that ANEL’s participation in the government has not at all changed our positions on such questions.

If the negotiations with Europe fail could Tsipras be tempted to ask for lines of credit from Russia or China?

If the European credits were abruptly cut off then there would be no other choice but to turn to alternative sources of financing. In Greece, Russia is seen as a friendly country, from both the Right and the Left. Syriza has no ideological affinity with the Putin regime, which certainly is not a great democracy. But in my view there are much worse things on the planet, for example the Gulf States regimes who fund terrorism and decapitate women in public. And yet Western governments hurry to do business with them.

And what if faced with Europe’s refusal, Tsipras decided to give in?

That would be suicidal, and would lead to Syriza’s collapse.


Interview with Stathis Kouvelakis by Éric Aeschimann, from the 12 February Nouvel Observateur.

For more on Left organisation in Europe and Syriza see 'Syriza Against Austerity and the Troika' Reading List here.