40% off EVERYTHING!
about 1 month left
Mike Watson
comments

The Red Scarf of Chantal Mouffe

It can be said that the work of theorists Chantal Mouffe and Ernesto Laclau has been realised in the new popular social movements in Greece and Spain. This article, originally published in Der Freitag, is a useful discussion of Chantel Mouffe's contribution to left theory and its pertinence today. 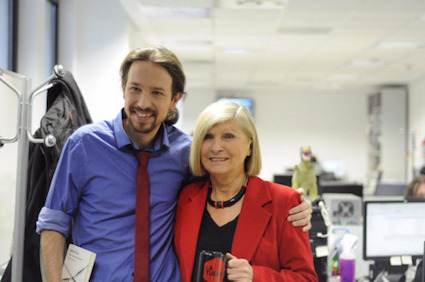 Chantal Mouffe didn’t come to Berlin just for lunch with Katja Kipping.[1] A discussion with the left theorist.

She is reluctant to say that history has backed her up, that she saw a lot of things coming. The elegant lady with the red scarf on the stage is too modest for that. Yet what Chantal Mouffe has suspected for the last thirty years seems now to be finding confirmation in Athens: if ‘progressive forces’ act together – workers, trade unionists, social movements – it really is possible to do something against neoliberalism. She is speaking just one day after the Greek elections, and many people have come to the Humboldt University in Berlin to hear this influential theorist of the left.

When Hegemony and Socialist Strategy appeared in 1985, the book that would in due course become her standard work, she and her co-author and husband Ernesto Laclau were vilified on the left scene. ‘We were violently criticized by orthodox Marxists’, she says with a smile in this conversation with Der Freitag. The concept of class struggle is too narrow for the committed feminist, who grew up in Belgium, attended Louis Althusser’s seminars in Paris and today lives in London. From Antonio Gramsci she has taken the critique of a reductionism that sees domination as simply economic. Mouffe and Laclau were also inspired by Ludwig Wittgenstein and Jacques Derrida, Michel Foucault, linguistics and psychoanalysis. They developed the idea of a radical democracy, in which identities and power relations must be constantly put in question. Social order is a product of discourses that change and require correction.

‘No one today maintains that only the economy counts’, says Chantal Mouffe about the development of left political philosophy since 1985. The Austrian publisher Passagen Verlag brought out a German edition of Hegemonie und radikalen Demokratie in 1991, and many other books have followed, most recently Agonistics: Thinking the World Politically in 2014. Mouffe’s theory was soon widely read and discussed. A group of doctoral students and young teachers formed around her and Laclau – the so-called Essex School of Discourse. Mouffe herself draws a mixed balance-sheet: ‘We found ourselves in the unpleasant situation where we had to defend concepts that we had criticized at that time as not sufficiently radical. The welfare state and social rights were strongly under attack. Everyone talked about freedom, while the idea of equality sharply lost ground.’

To read Chantal Mouffe’s writings since the publication of Hegemony and Radical Democracy, and hear the 71-year-old talk about all things under the sun, means receiving a unique mixture of political idealism and pragmatism. The University of Westminster professor, whose husband and companion died last year, manages to sound alternately radical and moderate, combining the two so that the true democracy she yearns for seems sometimes a utopia, sometimes a palpable project. Whether Chantal Mouffe opts for revolution or reform is hard to say.

The ‘radical’ label that she claims for herself goes along with her sharp critique of neoliberalism. We are living in a post-democracy, says the philosopher, a view shared by her British colleague Colin Crouch. By this she means a political system that damps down conflicts and demands for equality in the name of consensus. ‘We must resist de-democratization’, Mouffe demands, seeing this driven forward by free-market ideology.

No politics has been more disastrous, in her view, than that of the ‘new centre’ as pursued by the Labour Party in Britain. ‘After the Thatcher era, Tony Blair was a tremendous disappointment’, she recalls. The SPD and the French Socialist Party have not done any better: ‘They left the lower classes in the lurch.’ Even the financial crisis of 2008 did not rehabilitate the social-democrats. ‘They couldn’t put out the fire that they themselves had started.’

Chantal Mouffe’s position is based on a principle of democratic theory that she calls ‘agonism’. In her view, it is false to make consensus into a goal and act as if all citizens could always rationally agree as to the rules of their common life. If parties of the left and right declare a false agreement or pursue the same centrist policy, this means that certain real concerns remain unheard – to be subsequently taken up by extreme parties. Translated into German conditions, this means that the Grand Coalition would itself be responsible for the PEGIDA movement. Politics is per se conflictual, says Mouffe, this has to be borne in mind, so that antagonisms, distinctions between friend and enemy, can be transformed into an agonism. The goal should be a kind of conflictual consensus, in which different views of the common good can peacefully compete. In the wake of Carl Schmitt, and against theorists such as John Rawls, Jürgen Habermas or Ulrich Beck, Mouffe does not believe in a political community in which everyone can agree on universally valid principles.

It would seem to be precisely this principle that gives Mouffe’s thought a pronounced pragmatic cast. Her model of democracy appears less remote from reality than the liberal universalism that she dismisses as a symptom of a post-political Zeitgeist. Yet she does not argue, like some other left theorists, for a retreat from politics – an ‘exodus’ such as demanded by the critics of globalization, Michael Hardt and Toni Negri. In her opinion, protests unwilling to adopt any institutional form and avoid any relation to political parties – like many social movements and ‘Occupy’ supporters -- are devoid of prospects.

Here Mouffe’s thought is less radical than many a left dream of direct democracy. The ‘collective will’, as Gramsci called it, can only find expression in the context of representative democracy. And even if this is currently in crisis, nothing can prevail outside of parliaments. ‘We need synergies,’ she says, talking of a positive left populism and pointing to experiments in Latin America. She is sympathetic to Die Linke in Germany, close to the Solidarische Moderne institute – a think tank founded by politicians, scholars and NGO representatives in 2010, and has regular contact with Katja Kipping: ‘We get together over a meal and talk about the situation in Germany.’

This Monday, in fact, there is news to discuss. Alexis Tsipras is forging his coalition in Athens, while PEGIDA supporters are still demonstrating in German cities. ‘We’re living in dangerous times,’ says Chantal Mouffe. The many students who have gathered to hear her in the amphitheatre of the Humboldt University know that she has a contribution to make to the debate, listening carefully when the lady with the red scarf talks about the limits of rationalism or chains of equivalence in discourse.

Yet to really understand Chantal Mouffe, you need to follow the round of discussion that follows. ‘Are you radical?’, one young woman asks. Rather irritated, the philosopher speaks of the difference between describing existing conditions and formulating political projects. ‘I represent a kind of radical reformism, if you like’, Mouffe says. ‘And global justice?’, another woman student butts in. ‘Normative theories don’t interest me. We should rather take a pragmatic look at the EU’s trade agreements’, she replied. A radical reformer. A pragmatic thinker. That’s Chantal Mouffe.

[1] Current chairperson of Die Linke and a member of the Bundestag.

This article was originally published in der Freitag

The Return of the Political
by Chantal Mouffe

The Challenge of Carl Schmitt
Edited by Chantal Mouffe

New Reflections on the Revolution of Our Time
by Ernesto Laclau

The Making of Political Identities
Edited by Ernesto Laclau