On Monday, February 23, fifteen former students of Corinthian Colleges Inc., a network of for-profit colleges, declared a debt strike by refusing to repay their federal loans. Taking a bold and unprecendented stand on the current student debt crisis, the Corinthian 15, who are members of the Debt Collective, are demanding that the Department of Education discharge their debts, as well as those of former and current Corinthian students. 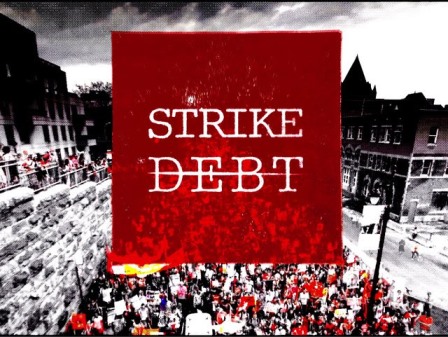 The Debt Collective evolved out of the post-Occupy project Rolling Jubilee, a volunteer-run initiative that uses crowdfunded donations to buy and then abolish portfolios of educational and medical debts. This past week, Rolling Jubilee abolished $13 million in tuition debts belonging to students of Everest College, a member of the Corinthian Colleges network.

Rolling Jubilee member, activist, and Verso author Astra Taylor wrote an op-ed for The New York Times on the implications of the debt strike, calling it "a new kind of civil disobedience."

Americans now owe $1.2 trillion in student debt, a number predicted by the think tank Demos to climb to $2 trillion by 2025. What if more people from all types of educational institutions and with all kinds of debts followed the example of the Corinthian 15, and strategically refused to pay back their loans? This would transform the debts into leverage to demand better terms, or even a better way of funding higher education altogether.

Taylor argues that debt cancellation might mean lost revenue in the short term, but that in the long term it will provide an economic stimulus worth much more than the cost:

Student debt cancellation would mean forgone revenue in the near term, but in the long term it could be an economic stimulus worth much more than the immediate cost. Money not spent paying off loans would be spent elsewhere. In that situation, lenders, debt collectors, servicers, guaranty agencies, asset-backed security investors and others who profit from student loans would suffer the most from debt forgiveness.

By declaring a strike, the Corinthian 15 are taking debt relief into their own hands and challenging the Department of Education to look out for students instead of protecting rich and powerful creditors.

By declaring a strike, they are taking a stand for all student debtors, by reminding us that for-profit schools are just an extreme version of our increasingly untenable system of debt-financed higher education. By declaring a strike, the Corinthian 15 are asking why the U.S. lags so far behind other industrialized societies in denying its citizenry the right to free college enrollment.

Read the letter and see how you can help here.