A few questions to Costas Lapavitsas: What of the Social Movements?

Last week Jacobin published an interview with Syriza MP Costas Lapavitsas, by Verso senior editor Sebastian Budgen. In this comprehensive discussion of the situation in Greece, Yanis Varoufakis's self-proclaimed "erratic Marxism",  and the "Grexit", Lapavitsas reflected on the Greek social movements and the international Left's part to play. 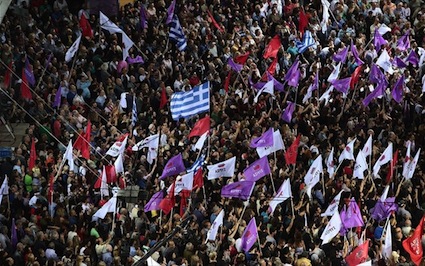 Sebastian Budgen: A question then about forced exit and its consequences: the Plan B that you describe in some detail with Flassbeck seems quite statist. Would it be enough to withstand the shock of devaluation and autarchy?

If not, what are the Greek movements and Syriza doing to develop what we can call a Plan C — a plan of resilience, of commons, of solidarity, that would organize social reproduction where the state cannot satisfy people’s needs? What role would such strategies play in fending off the temptations of authoritarianism?

Of course, any kind of strategy that is in the interests of working people — any kind of transitional strategy — must incorporate precisely what you called Plan C. And when we talk about the public and the state and so on, what I’ve got in mind is the collective and the public sector generally. The idea of the state taking everything over is an old-fashioned idea that died a death with the collapse of the Eastern Bloc. That’s not really in the cards anymore.

A lot of what you’re saying about a positive, progressive exit presumably relies on the role of popular mobilizations in pushing the government forward and giving it the necessary support when it comes to the crunch. You’re optimistic about the resilience of social mobilization in Greece at the moment? Because there’s been a lot of talk about the falling off and the despair and resignation that’s affected Greek society in the last couple of years.

I take heart in the very strong wave of support for the government among ordinary people since the election. We haven’t seen very much mobilization; it’s true. But support is enormous. The spirit of being in favor of what’s happening and allying and facilitating this government to take action is enormous. And that’s the most positive thing.

Now, will that translate into activity? I don’t know. No one knows that. But there is no denying the good will. No denying it at all. And we should work on that. We should mobilize that for radical solutions and radical answers.

And what do you think the role is of people outside Greece who are in favor of such a progressive exit? Because there’s been a lot of quasi-blackmail talk about how one shouldn’t criticize what Syriza is doing, that it’s all very easy to criticize from the comfort of one’s armchair in countries that are not on the edge of a precipice, and so on and so forth.

But, at the same time, it’s clear that there are big shifts going on that need to be taken account of. What do you think is the right kind of position between uncritical support and positive solidarity?

Uncritical support for Syriza right now is nonsense. It is a repeat of the worst diseases of the Left that I and many others thought had been left behind. “Don’t criticize, support, rah rah rah!” These are things that the Left used to do in the bad old days. And that, in very different contexts of course, is what allowed monsters to emerge.

That’s not what’s going to happen in the case of Syriza, of course, but the outlook and the attitude of “our team is in the field! Let’s support our team and not be critical” is not really an outlook and an attitude of the Left. Of course we support. But we criticize. Unless we criticize, nothing positive will happen. That’s the point that we’re at.

On that front, the most serious and positive help that that the Left can give, other than mobilizing and so on, is to begin to table proposals, to begin to reconsider the European Monetary Union as a whole. I cannot repeat that enough times.

The Left in Europe over the last few years has gone on an incredible trip. It is as if it has lost its critical senses. It has imagined that the process of European integration through the EU and the process of forming the European Monetary Union [EMU] is somehow internationalism in the way in which we on the Left understand internationalism.

It’s not. Sorry, but it is not! And not only is it not, it cannot be turned into genuine internationalism by changing some small part of it, reforming it, improving it. That is just nonsense! The Left must rediscover its critical facilities and critical attitude and realize that not everything that transcends borders is progressive. In this case the EU and the EMU have shown very clearly what they are.

The Left at long last must begin to table ideas about genuine internationalism in Europe that reject these forms of capitalist integration. Not improve them. Reject them. That’s the real radical outlook for the Left, and that is what it should do.

There’s one more thing. I’ll say it, but I don’t know how much impact it will have. The Marxist left in particular, over the last couple of decades, has unfortunately regressed in terms of its ability to analyze the political economy of modern capitalism. It has imbibed and absorbed a kind of second-rate economics that basically thinks and believes that Marxism and the Marxist analysis of capitalism pretty much can be condensed into the tendency of the rate of profit to fall.

For many people in Europe and elsewhere, Marxist political economy pretty much amounts to interpreting everything in terms of the proportion of profits — or what you measure as profits — in relation to capital advanced. That ratio, for some of these people, tells you everything you need to know about the past, present, and the future of capitalism.

That’s not Karl Marx, of course, and that’s not what the great Marxists did. There are people who today try to interpret what is happening in Europe according to the tendency of the rate of profit to fall. That’s nonsense. Manifest nonsense. It doesn’t serve any interests or any purposes. It doesn’t help anyone.

So the left — what remains of it — should begin to rediscover some of the elements of creative Marxism of the classical period: some of Lenin, some of Hilferding, some of Bukharin, some of the great German Marxists. And begin to interpret modern capitalism in a complex, rich, and balanced way.

Costas Lapavitsas's and Heiner Flassbeck's alternative blueprint to crisis and austerity in the Eurozone is out now.