David Harvey: On Syriza and Podemos

Marxist geographer David Harvey recently spoke with il manifesto about the contradictions inherent in capitalism, the possibilities for its undoing and where Syriza and Podemos fit within its opposition. 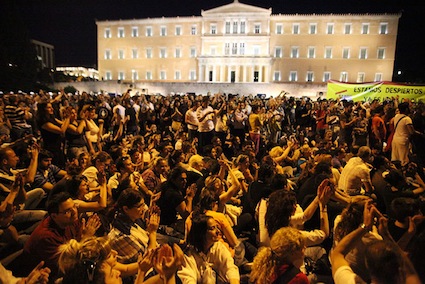 At 79 years of age and fresh from publishing a new book (Seventeen Contradictions and the End of Capitalism, Oxford University Press), David Harvey is still reading social change with one eye on Marx and another on the social movements.

It’s not something that we have to create – there’s plenty of people out there at odds with the world they are living in, searching for a non-alienated existence and hoping to give some meaning back to their lives. I think that the problem lies in the historical Left’s incapacity to get to grips with this movement, which really is one that could change the world. At the moment, this search for meaning has above all been appropriated by religious movements (like evangelists), and politically that can imply its transformation into something totally different. Here I’m thinking about the anger against corruption, rising fascism in Europe and the radicalism of the US Tea Party.

The book ends with a discussion of three dangerous contradictions (unlimited growth, the environmental question, and total alienation) and a series of vectors of change. Is this a sort of programme, or will the revolt have to be based on a sort of fluid coalition of different forms of discontent?

The convergence of different forms of opposition will always be fundamentally important, and we saw as much with Gezi Park in Istanbul or the movement that took to the streets of Brazil during the football World Cup. Activism is fundamentally important, and again I think the problem here is the Left’s inability to channel it into anything. There’s a number of reasons for that, but I think the most important of them is the Left’s failure to abandon its traditional focus on production in favour of a politics of everyday life. In my view the politics of the everyday is the crucible where revolutionary energies might develop, and where we can already see activities that are seeking to define what a non-alienated life might look like. These activities are more a matter of the space where we live than the space where we work. Syriza and Podemos offer us a first glimpse of this political project – they are not pure revolutionaries, but they have awakened very great interest.

Syriza is playing a tragic role, in the classical sense of the word. Effectively it is saving the euro (which has played the role of an instrument of class violence), also for the sake of defending the idea of Europe, which has been one of the banners of the Left in recent decades. Do you think that it will find enough political space, or will it ultimately fail?

In this case I don’t think it’s easy to say what a success or a failure would be. In many regards Syriza will fail in the short term. But I believe that in the long term it will have achieved a victory, because it has put questions on the table that can no longer simply be ignored. At the moment the question mark is over democracy and what democracy even means when Angela Merkel has become the autocrat ruling over the lives of all Europeans. The moment will come when public opinion cries out that the autocratic governments have to go. Ultimately, if Merkel and the European leaders stick to their guns and force Greece out of Europe (as they probably will), then the consequences will be far more serious than they currently imagine. Politicians do often make grave errors of judgement, and I think this is a case in point.

In the book you predict a new cycle of revolts. Yet an appraisal of the last few years would have to say that the Arab Spring has proven a disaster, while Occupy has not been able to transform itself into an effective political force. Do you think the answer is something like Podemos, which has been able to give political expression to the 15-M movement?

Syriza and Podemos have opened up a political space, because something new is happening. What is it? I can’t say. Of course there will be those on the anti-capitalist left who accuse them of ‘reformism’. That may well be true, but they have also been the first forces to put forward some policies, and once we’ve started down that road then that will open up new possibilities. Finally breaking with the mantra of austerity and smashing the power of the Troika would, I believe, create the space for new perspectives, which could then further develop. I think that at this stage, this kind of parties we are seeing in Europe is the best thing that we can hope for, beginning to define the Left alternatives that we are currently lacking. They will probably be populist – with all the limits and dangers that populism entails – but as I have said, this is a movement: it opens up spaces, and what we can use these spaces for depends on our capacity to ask, ‘OK, now that we’ve got this far, what should we do now?’

I would say that it has never been so strong as it is now: indeed, what is austerity if not the transfer of wealth from the lower and middle classes to the classes above them? If we look at the data on who has benefited from state intervention since the 2008 crash, we find that it was the 1 percent, or rather, the 0.1 percent. Of course the answer to your question depends on how we define neoliberalism, and my definition (that it is a capitalist class project) is perhaps somewhat different from what other scholars’ would be.

What were the new ‘rules of the game’ established after the 1970s?

For example, in the event of a conflict between collective wellbeing and saving the banks, we save the banks. In 2008 these rules were applied in a very forthright manner: we saved the banks. But we could easily have resolved the problems of those who had been evicted – addressing people’s need for a home – and only then gone on to address the financial crisis. The same thing happened with Greece, which was lent a sackload of money that went straight to the German and French banks.

Why, though, were the Greeks a necessary intermediary in the transfer between the governments and the banks?

The structure that has been put in place avoided Germany directly saving the German banks or France saving the French ones: without Greece in between, it would have been too obvious what they were doing. Whereas this way it looks like Greece has been treated generously, pouring this massive amount of money into it – when in fact these funds went straight to the banks.

You mentioned the 1 percent. As a Marxist, do you think that this is just a useful slogan: does it have some analytical value, or does it just distract our gaze from the concept of a class struggle?

If we are really for historical-geographical materialism, then we have to recognise that contradictions are always evolving and so, too, must our categories. So by talking about the ‘1 percent’, Occupy succeeded in introducing this concept into common parlance. And it is clear that the 1 percent massively increased its wealth, as Piketty and all the data show. To put that into different terms, to speak of a 1 percent is to recognise that we have created a global oligarchy, which is not the same thing as the capitalist class but is at the centre of it. It is a sort of keyword that serves to describe what the global oligarchy is doing, saying and thinking.

This interview was orginally published in Italian here.