What is Karl Marx? 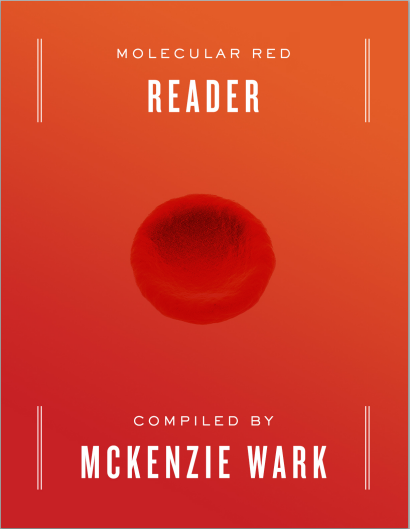 "Sometimes to take three steps forward one has to take two steps back, back into the archive, to find the materials for going on, but in a new way. I just don’t think the canonic theoretical resources trotted out over and over are adequate any more to understanding the present. We need new ancestors, and new ways to read our contemporaries."

The Molecular Red Reader is a free downloadable supplement to McKenzie Wark's Molecular Red: A Theory of the Anthropocene, collecting some of the rare, unpublished, and (until now) untranslated texts that inform his radical analysis in Molecular Red.

What is Karl Marx? (1913)
by Alexander Bogdanov
translated by Evgeni V. Pavlov

He died so long ago… and yet the word “death” still strangely does not belong to his name. After him, just like after any other man, remains basically only one thing – his cause. And no man on this earth has ever left after himself such a gigantic legacy.

This legacy is the idea, the organization, the example of life.

The idea… He transformed political economy, history, and the entire realm of the social sciences; he gave philosophy a new soul. Not only his friends but even his enemies are again and again borrowing from the richness of his thought and knowledge, and they will continue to do so for a long time. At the basis of it all lies one all-unifying living idea. In itself it is a very simple idea, but not everyone is able to understand its magnitude.

Three and a half centuries before Marx there lived a humble astronomer called Nicolas Copernicus. He also transformed the science of his time and he also had one simple idea; this idea is very similar to that of Marx.

Ancient astronomers dutifully observed the heavens, studied the motions of the planets, and saw that they were ruled by a deep, elegant and immutable regularity that they tried to express and explain to others. But here they found some strange confusion. The planets were moving among the stars sometimes slower, sometimes faster. At times they seemed to stop and turn around, and then go again in the same direction as before; and after some months and days have passed they appear in the same place where they were before and the entire process begins again. New complex theories had to be created in which each planet had its own sphere, with its own orbits that rotated alongside other orbits and so on. But the confusion remained and the calculations were extremely difficult to complete.

Copernicus had an idea: perhaps everything is so complex and confusing because we are looking at it from Earth? What if we change the point of view and try, of course only mentally, to look at everything from the Sun? And when he did so, it turned out that everything was simple and clear: the planets, including Earth, were moving in circular and not tortuous orbits, and the Sun was their center. The only reason that this was not clear before Copernicus was because everyone thought Earth to be immovable and its own movement was confused with the movements of other planets. Thus a new astronomy was born, and it explained to everyone the life of the sky.

Marx was not a worker; but through the power of his mind he was able to fully understand the position of the worker. And he found out that with this transition everything immediately changed its contours and forms. The powers of things and causes of events were revealed to the human eyes in a way that was not possible from the old point of view. Reality, truth, even the everyday appearance of things changed and became something different, often something opposite to what it was before.

Yes, even the way things appear to us! What can be more obvious for a capitalist than the fact that he feeds the worker? Does he not provide the worker with the work and the salary? But for the worker it is no less obvious that they are the ones who feed the capitalists with their labor. And in his discussion of surplus value Marx demonstrated that the first view was an illusion, an appearance that was similar to our everyday perception that Sun moved around Earth, but the second view was the truth.

Marx discovered that all human thought and feeling received different direction and were formed differently depending on the class to which these human beings belonged, that is, depending on their position in relation to production. Different interests, habits and experiences lead to different conclusions. What is reasonable for one class is ridiculous for another, and conversely what is just, lawful and normal for one class is injustice and misuse of power for another. What appears as freedom to one class, looks like slavery to another. The ideal of one class causes horror and disgust of another class.

Marx summed it up thus: “it is their social existence that determines their consciousness.” Or, in other words, thoughts, aspirations and ideals are determined by the economic situation. It is with the help of this idea that he transformed social science and philosophy. It is on this idea that he founded his great doctrine of the class struggle and its role in the development of society. He studied the path of this development and showed where it leads and which class would create the new organization of production, what this organization would look like and how it would end the division of classes and their long struggle.

Marx was not a worker. But it was in the working class that the great teacher found the foothold for his thought, the point of view that allowed him to penetrate the depth of reality and to help him discover his idea. The essence of this idea is the self-consciousness of the working proletariat. That is why Marx more than any other thinker belongs to the proletariat.

He belongs to the proletariat also as the great organizer. He changed the idea of the proletariat into a mighty instrument of organization. Sixty six years have passed since the words of the famous manifesto he co-wrote with Engels called the world to unity. And the echo of the living life continues to repeat them, louder and louder, reaching the farthest corners of the planet. In the east and in the west, gigantic organizations are formed under the slogans of this manifesto; and they are growing, gathering forces, unstoppable, faster and faster, forming an avalanche of History.

The fate of Marx the organizer was tragic as it was full of brilliant victories but also of heavy defeats. Not once did cruel fate destroy what he built up at the price of great efforts. As a true organizer he did not lose courage in the face of difficulties. He waited for the right moment and conditions and again began his work with more determination and scope that before. The organization that he founded in Germany during the epoch of the 1848 revolutions fell apart under pressure from reaction. Marx found himself in exile in a foreign land. But years passed and together with his comrades he founded an international society of workers and lead its work, relying on his mighty ability to persuade others. It turned out that the time for this organization has not yet come. At first it grew and expanded, but later it was discovered that it tried to unite elements that were too different. Working proletarians, the people of unity and comradely discipline, could not get along with anarchists who were in some cases part of an embittered petite bourgeoisie that was perishing under the blows of capital and in other cases lumpen proletarians who were not connected with production and were not sufficiently educated by the participation in production. Anarchists split the organization and it soon died.

It was Marx’s favorite child… He, of course, did not doubt that it would rise again. But he did not get a chance to see it. He died six years before it happened.

It is true that he did see how Social-Democrats and other young workers’ parties, inspired by the same ideas, grew in Germany and other countries. But how happy would he have been if he were to learn that the world organization to which he gave so much was to rise again and expand tens times larger than before, that it would at some point ideologically connect over twenty five million people. He was not given this happy opportunity…

Marx was an example of a human being, that is to say, of a worker and a fighter. Labor and struggle constituted his life as they do the life of the working class. And his life was as pure as the banner that he carried throughout it.

In Marx there was embodied a new type that merged creative thought and creative practice into one inseparable harmonious whole. And in that he belongs to the new world.

At the same time as Marx there lived another great man of science, another son of bourgeois society, Charles Darwin. When Darwin made his discovery regarding the origin of the species of living beings, Marx at once understood and appreciated the significance of this revolution in science. Later Marx showed this understanding when he sent Darwin his greatest work, Capital. But Darwin never bothered to read it. The genius of the proletarian world was able to understand the genius of the bourgeois culture, but not the other way around.

There was no realm of knowledge foreign to Marx. He studied everything, his untiring mind was interested in everything. And in this he is the proletariat’s closest kin. A worker does not have a lot of free time, but he wants to know everything: nature whose resistance he overcomes with his hands, society in which he is fighting, and the realm of science where he is looking for direction for his life.

Marx’s genius is the soul of the working class that reflected itself and came to know itself in the most powerful brain of the nineteenth century.

Bogdanov for the win!

Molecular Red: Theory for the Anthropocene by McKenzie Wark (2015)