Luciana Castellina reflects on the 100th birthday of Pietro Ingrao, a long-standing figure of the Italian communist movement, whom the title of 'veteran', with its associations to enduring activity and commitment is certainly appropriate. 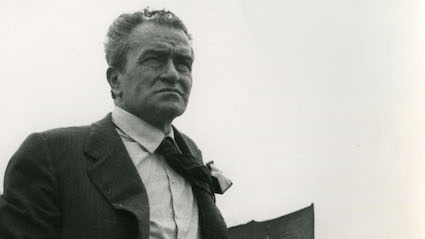 I still have clear memories of the first time I celebrated Pietro Ingrao’s birthday: it was in 1965, half a century ago, on his fiftieth (which seemed ancient to me, at the time). Not long out of the PCI’s boisterous Youth Federation, Sandro Curzi and I gave Ingrao his first pair of loafers, with a note asking him to be a bit less prudent: ‘walk with the times, walk along with us’.

I can still remember it well because at that time we were in the midst of an ‘Ingraian’ battle, just before the fateful PCI Ninth Congress, where the comrades who identified with his ideas came out a bit more into the open (not that this meant forming some sort of tendency). And he himself made what was considered an unprecedented break. At the Congress he clearly stated, ‘It would be dishonest of me to stay silent about the fact that comrade Longo [the then PCI general secretary] has not convinced me with his refusal to allow the new custom of public debate into our party’s life – for this would have allowed the comrades to see not only what directives and decisions have prevailed and become all of our responsibility, but also the dialectical process from which they have resulted’.

As is well known, this intervention received a lot of applause, and yet soon it led to his marginalisation from the party leadership, as he was ‘demoted’ to head of the PCI parliamentary group and then president of the Chamber of Deputies (at the time power at Party HQ counted for more than parliamentary jobs). And we were dispersed among various minor roles, outside of the corridors of power. I remember it well because essentially it was then that the Il Manifesto story began, even if it would only actually see the light of day four years later on, and without Pietro – who here as throughout his life subjected his political decisions to the need to remain within the ‘vortex’ [1] of the PCI’s supporters. To be clear, he did not refrain from joining us out of fear, but because of the deep-seated sentiment common across the whole Party, that you should not sacrifice collective opinions to your own individual will.

Ultimately we of the Il Manifesto crowd did make our move; but that was also because our responsibilities in the PCI were infinitely lesser than Ingrao’s, and thus our act had none of the same consequences that it would have had for him. But you shouldn’t think it was easy for us either – it was a decision we were really torn over, and sometimes even decades later we asked ourselves if maybe we should have stayed and fought rather than put ourselves in a position where we could be pushed to the margins. (And please, youngsters, don’t object that back then it was impossible even to voice your disagreement; it’s true, it wasn’t pretty, and yet all the same, our opinions counted more then than they do now, and our being pushed out was a trauma for the whole party. Now we can say everything, because it doesn’t count for anything any more).

Today Pietro Ingrao is 100, and Il Manifesto (if you count its incubation, too), 50.

Over the course of time we’ve perhaps lost that sense of what Ingraismo was, and I even ask myself if any of the youngsters running the paper today know what it was really about. It wasn’t, you see, just a fight to democratise of the party, the famous right to disagree. It was a lot more than that: it was communist thinking’s most serious attempt to account for capitalism at its height, identifying its new and modern contradictions and using these – more than the old ones of rural Italietta – not to ‘follow a thousand streams of discontent’ (as people used to say) but to build a real alternative development model.

It meant a break with the idea of linear development, the ‘uncritical modernity’ at the basis of the neocapitalist (and Craxian [2]) culture of those years. And moreover an attempt to grasp the fact that Italy’s crisis was no anomaly (and that’s still a common misconception) but could only be understood in connection to the advanced capitalism that was developing across the world.

These different assessments of the period led to two different political approaches, and as such this was not only a theoretical question, but also one that was tightly bound up with the issue of what we had to do politically: whether we needed to work to make Italy ‘normal’ – aligning it with European modernity – or instead to tackle this connection also, in order to both resolve the old problems and prepare an alternative to capitalist ‘normality’.

The right wing of the PCI was obviously opposed to this latter perspective. Indeed, when the PCI was heading toward dissolution with the Bolognina turn [3], this innovation was precisely the basis of our famous ‘Motion 2’  opposing the liquidation of the Party – and this time, we were officially collaborating with Ingrao. We opposed this move not in the name of conservation, but in the interests of change – this understanding strengthened, rather than reduced, the need for an alternative to the system.

The old categories wouldn’t do any more, and Ingrao was always sure not just to regurgitate litanies. He instead sought to identify the new potentials offered up by historical development – the new antagonistic subjects – and to understand how they formed and aggregated in order to become a leading class [classe dirigente] able to advance the prospect of a new society. Here, and now.

As you know, we lost.

We lost that debate in the 1960s – questions which we then worked through in 1970s’s Tesi per il comunismo (which did not say that Italy was now ‘ripe’ for communism in the sense that it was imminent, as some wrongly claimed – or joked – but that it would not be possible to solve the problems that the crisis posed within the framework of the capitalist system, even if it was modernised).

That was the PCI’s Eleventh Congress, a watershed moment whose emotions, passions and trials Pietro Ingrao evoked in his book Volevo la luna [‘I wanted the moon’].

On Pietro Ingrao’s one-hundredth birthday, maybe I ought to have talked more about his human aspects, his personality, the way he worked out who he was, rather than immediately getting straight to the political kernel of his life as a communist.

But I have done so for two reasons: because too often on birthdays we tend to reduce everything to the character traits of the person in question, their moral qualities, and not reflect on their political choices. And also because Pietro in particular, as he’s grown old – and perhaps also because of what’s happened to the Italian Left – has become thought of in a more low-key way, perhaps with a certain charm, more as a poet than as a political leader (even though he certainly was one, in the front rank).

He never in fact stopped being a poet – we need only think of his manner of expressing himself, which was never the language of politicians, or repeating catechisms. No: he sought to light up the imagination. Do you remember his surprising conclusion to his intervention at the first of the two congresses that dissolved the PCI (the Nineteenth Congress, in 1990), when he spoke of ‘non-human beings’, drawing attention to nature and its different species? Was that not poetry, too? It sounded like it, anyway, in the grey and gloomy debates we were having then, when the game was up.

Pietro never used the language of politicians, because he listened. That may seem banal, but hardly anyone listens. And because he listened, much younger generations also listened to him, even those who knew nothing of the PCI’s Eleventh Congress or even the PCI itself. I’m thinking here of the European Social Forum held in Florence in 2002, for example, where his talk about peace won the attentions of young people who did not even know who he was.

He listened because he has always emphasised a now out-of-favour element of democracy – the leading role of the masses, their participation.

It might seem curious, but a lot of Ingrao’s political thinking was marked by his own adolescent apprenticeship in cinema. Across many years I had a lot of meetings with some of the big names in Hollywood on account of my role promoting Italian cinema abroad, and our discussions often turned to Italy and how come there were so many communists. I would half-seriously tell them that ‘Italian communism is so special because it’s got roots in Hollywood as well as in Moscow – so you’re partly to blame’. And then I’d tell them the story, which I’d heard so many times from Pietro, of the formation of a significant part of what would become the PCI leadership group after the war: Mario Alicata, Ingrao himself, and also others who were not at the top of the Party but were very influential: Visconti, Lizzani, De Santis, etc., all of them students of the Experimental Cinema Centre.

I’d talk about them, about Ingrao and what he’d told me about how his generation had started to flower in cinema even in the mid-1930s. And, tellingly, how they had revelled in the US cinema and literature of the New Deal era, knowledge of which had reached them by tortuous means, thanks to a chance event – the arrival of the unique Ahrnheim, a German Jew who had fled the Nazis, and reached Rome by god-knows-what means before the Racial Laws were passed in Italy, too.

‘It was those films’ – Pietro told me in one interview (for the weekly Pace e guerra, which I was running at the time) during an important show in Milan on the 1930s – ‘that told us about sociality, the working class, social solidarity, the struggle. It was precisely thanks to those films (which were means of communication between the social movements and the ordinary American, so different from the elitist and introverted Italian antifascist culture of the 1920s – which we loved, but had not helped us) opening us a window on what it meant to be an engaged intellectual, that we became politicised. They were our first step toward politics’.

This connection between culture and politics has been a distinctive trait of Italian communism, and Pietro Ingrao one of its most important interpreters. Thanks, Pietro, and happy birthday.

[1] Ingrao was a prominent opponent of the 1991 dissolution of the PCI into the ‘Democrats of the Left’. However, he did initially join this party for the stake of staying with the majority of ex-PCI members (which he described as a gorgo [‘vortex’]), rather than the smaller group who created Rifondazione Comunista. However, he did ultimately join Rifondazione in 2004.

[3] i.e. the transformation of the PCI into the ‘Democrats of the Left’