Verso Classics: back in print and 40% off!
9 days left
John Merrick
comments

Durand, Kouvelakis and Keucheyan: "Make common cause with Greece"

Syriza coming to power in Greece at the end of January has finally disproven the argument that it is possible to implement an alternative to neoliberalism within the framework of the European Union. The EU treaties are neoliberal, in their very DNA. Since the 1986 Single European Act, or even before then, we have seen constant proof of the EU’s neoliberal DNA, and even its hardening. Up till now, the untrammeled hegemony of neoliberalism could have been blamed on this or that government coming into office: in this view, the reason why austerity policies reigned across Europe was that a François Hollande, a Matteo Renzi or some other social-liberal lacked courage or betrayed their campaign commitments to reorient European policies. 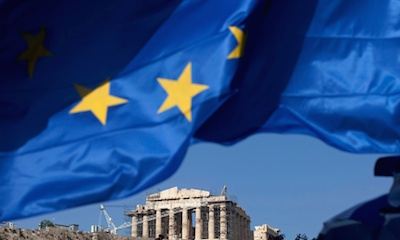 But with Syriza, that argument has collapsed. After all, Alexis Tsipras and Yanis Varoufakis have clearly been working with some determination to try and bring about change at the continental level; but they have done so in vain. Since 4 February the European Central Bank has cut off the main source of financing for the Greek banking system, while the payments from Europe itself were broken off in summer of 2014.  The noose is tightening, pushing the country toward a disorderly bankruptcy and chaos, unless of course it accepts the humiliating terms imposed by the EU.

The conclusion? That the alternative to neoliberalism must proceed by way of a break with the European framework, and thus – how could it be any other? – through Greece leaving the Eurozone. Any basic self-defence measure that the Syriza government takes in the face of the constant aggression to which it is subjected by the EU and ECB, such as defaulting on the debt payment or taking the banking system into public hands, will place it outside of the Eurozone. And of course such a break would be no panacea. There are no good solutions for Greece, only less bad ones. But a break with the EU holds the possibility of a renaissance for this heroic people, which in recent years has been subjected to unprecedented torture-by-austerity.

This series of events has also brought something else into focus: the weakness of the support for Syriza elsewhere on the continent, and first of all from the other governments of Southern Europe. We might remind ourselves that Tsipras’s first trip abroad, in early February, was to Paris; but François Hollande did nothing to come to his aid. That will be worth remembering when the time comes to assess the French president’s disastrous term in office, at the next election when the Socialist Party insists on the need for the ‘unity of the Left’.

The most tragic thing is that not only has Tsipras not enjoyed the support of the French government, but nor has he got any help from the country’s social and trade union movements. The biggest French demonstration in support of Greece, staged in mid-February, rallied at most five thousand people; the trade union confederations were almost totally absent. This is truly shameful. This lack of support for Syriza demonstrates the weakening of internationalist consciousness on the continent, and particular in the French workers’ movement. Internationalism is not a matter of supporting ‘someone else’s cause’ out of altruism or moral duty, but of understanding that the interests of the popular classes of France and Greece are tied up with one another; not least because they have common enemies. Can anyone really think that the implementation of an alternative to austerity in Greece won’t have repercussions for France, too – when this would mean overturning the balance of forces in politics and society?

These policies would offer the French trade union movement a powerful lever for breaking out of its current lethargy and out of its inability to organise resistance to the policies of Manuel Valls’s government. And Europe’s ruling classes have a very clear view of what the workers’ movement doesn’t seem to get. Their efforts from the ECB downward are directed toward a single objective: humiliating the Syriza government by forcing it to renege on its popular mandate. There is no question of letting an electoral mishap break the monopoly of the extreme centre. What they are trying to save is no less than Margaret Thatcher’s doctrine that ‘There Is No Alternative’.

The deadlines for Greece’s debt repayments are coming in the next month, and the prospect of the country leaving the Eurozone in a more or less disorderly manner will become more and more sharply posed. The French trade union movement figures among the main actors in the Europe-wide drama that will follow from this, just as much as the German government, the ECB or the ‘men in black’ of the IMF. The mobilisations that it could launch in solidarity with the Greek people could change the strategic picture, including in France itself.

In such a scenario, then the popular classes’ hostility to the current system would lead to some outcome other than more votes for the Front National. It would become internationalist again, that is, capable of identifying another people’s resistance as a cause that is also fully its own.