40% off EVERYTHING!
about 1 month left
Izzy Ocampo
comments

Rebuilding Nepal, slowly and unevenly: a dispatch from Aditya Adhikari

Aditya Adhikari, the author of The Bullet and the Ballot Box: The Story of Nepal's Maoist Revolution, is based in Kathmandu, Nepal. He recently posted a note on his Facebook page about the response to the earthquake, reproduced here.

I accompanied a team delivering food supplies to Suryakot village, Badegaun VDC Ward 8, Sindhupalchok yesterday. All of the 165 houses in the village have been destroyed and at least 19 people have died. I won’t describe the abject circumstances in Sindhupalchok since others have already done so (notably Gyanu Adhikari at recordnepal.com and Jason Burke in the Guardian). Instead, here are a few observations about the social and political aspects of the disaster. 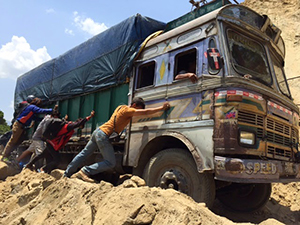 Community organizations are more active and enjoy greater legitimacy than the political parties. The distribution of supplies was remarkably organized. Local volunteers had taken detailed notes on the number of people in each household and the numbers of the dead and injured.They lined up representatives from each household and asked them to wait for their names to be announced, and then receive supplies on behalf of their families. Individuals received amounts of rice, dal, oil and salt that were in proportion to the size of their families. The villagers were patient and felt that the distribution was fair.The volunteers organizing the distribution identified themselves as members of FECOFUN (the forest users’ group) and other Community Based Organizations (CBOs). Only after much prodding did they reveal that they were members of political parties as well. Of the three chief organizers, one was from Mohan Baidya’s Maoist faction and the other two were from the UML. They seemed ashamed to be identified with their parties and were scornful of their leaders.They felt that the local party bodies and administration had no capacity to organize the relief effort. While the local All Party Mechanism was involved in trying to allocate the Rs. 9 lakhs that the government had given to the VDC,the parties had not taken detailed records of the situation of households and their needs. It was generally felt that any attempt to distribute funds through the All Party Mechanism would only result in chaos and uneven distribution. It was clear that the CBOs possessed superior organization and greater public legitimacy than the parties.

There are signs of inequality in distribution and the possibility of increased tensions between ethnic groups. Most volunteers depend on local leaders to select areas to distribute relief, and these leaders are disproportionately Bahun/Chhetri. The village we were guided to included Bahun/Chhetris and Dalits. The Dalits had no complaints and waited to receive their fair share. However, we heard that the next village consisted mostly of Tamangs who were saying: “These Bahuns are clever and know how to get relief material. We have heard that the government is sending them food supplies. We have no option but to intercept the supplies and seize them.” Meanwhile, a Bahun woman in the village we visited said that the neighboring Tamang villages had already received relief from their relatives “in London and America.” All the villages in the area are in dire need. If inequities in distribution persist, there is a chance that resentments will flare up.

Very few people are confident that they will be able to rebuild their lives in their villages. Villagers despaired they didn’t have the money to rebuild their homes, thought that the government would likely forget about them after handing out a one-time cash payment, and they had no option but to move to the cities or migrate to other countries. A family related to our driver loaded the furniture they had been able to salvage from the wreckage of their house onto our truck to take to Kathmandu. Parents asked how they would be able to send their children to schools in the city. When a child mentioned that he had heard that the local school would reopen in two weeks,his friend was openly skeptical. “I don’t have any books anymore,” said the eight year old. “How am I supposed to go to school?” There could be large-scale migration to Kathmandu and the Tarai once villages have received immediate relief (or even sooner), unless robust medium-term reconstruction efforts immediately kick in.

Reports regarding the ‘looting’ of supplies seem exaggerated. Throughout our journey we heard reports that locals were looting relief trucks. Police convoys were waiting at Dhulikhel to provide protection to vehicles carrying supplies. We found, however, that the dominant feeling in the localities we travelled through was more of solidarity towards each other. At one place, a group of locals asked us where the supplies were headed for, and which organization had sent them. They allowed us to move on when we told them that we were going to Badegaon and that the relief had been purchased with donations sent by our family and friends. We were told that they might have seized our supplies had we said that the supplies were from the government. Anger against the government was high, desperation everywhere, and people felt that they are rightfully entitled to any goods provided by the government.But they didn’t think that they had the right to forcibly take supplies from private or non-governmental sources.  At another place, villagers nodded in sympathy when we said we were going to Badegaun. They said that Badegaun had been much harder hit than their own village, even though it was apparent that they too had lost everything and were yet to receive any relief.

Some photos of the visit are available here.
Follow Adhikari on Twitter to get updates from Nepal.