Badiou on Bensaïd: "He would often say that essentially I believed in miracles…"

Alain Badiou reflects on some of the debates that defined his relationship with Daniel Bensaïd, his "distant companion". Read the original French interview, conducted by Ballast magazine for their Bensaïd week, here. 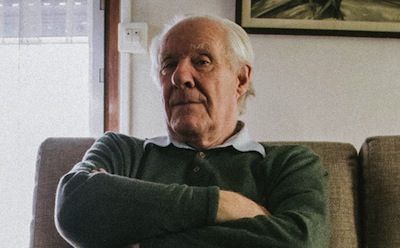 Photo by Maya Mihindou for Ballast.

It’s an April morning, and France’s most-discussed Red Guard leads us into his home: tall, and not without a little mischief in his eye, he takes his place on his sofa. We’d read Badiou, certainly—and he was no fan of the anarchists who held our affections—but this wasn’t about his work. Or not directly, anyway. Bensaïd was well-known to Badiou, and he immediately agreed to an interview precisely because of the "friendship" between the two. And anyway, it wasn’t really a matter of posing him questions: rather, we sprung a few expressions on him that we’d pulled from Bensaïd’s texts, asking for his view. The two of them didn’t always see eye-to-eye; and their "very major disagreements" (as Badiou describes it) fed into some of the debates that Marxists hold most dear.

I understand what Daniel meant: resisting the irresistible is a bit like what I mean when I say "doing the impossible", that is, resisting what appears to be an irresistible force of History and politics. Essentially, our opponents and enemies always claim that what they stand up for is the real, that it’s irresistible, that it is objectivity. You have to agree: you have no choice but to accept this real. But if we went along with that kind of argument then we’d never do anything. So I fully approve when Daniel says "We must resist, but we also have to know that in a certain sense, from the viewpoint of domination, what we are resisting is irresistible". We have to recognise this. Resisting the irresistible is knowing that we never have to accept the description of the world as provided by our opponents: we must have our own vision of the world, or else we can’t do anything.

The possibility of the event

I long discussed the event with Daniel. He would often say that essentially I believed in miracles, that I was idealist and religious, because I was awaiting the event—the good news … He made this kind of charge against me, but I think it’s a bit unfair: what I call the event is simply an event marking the discontinuity in the evolution of the real itself—and not the arrival of something unbelievable or miraculous! It is a dialectical category. There is a moment when different phenomena crystallise, a moment when something happens that, from the viewpoint of the real, was not foreseeable or possible to deduce from the situation. I see this event as highly important, because it is always starting from there—to use the kind of language Daniel often did—that new relations of force, or a new arrangement of the forces on the social and political terrain, can emerge.

Well, there’s a big debate! This is the question of organisation, which is the central problem of politics. Essentially, my position is that something about the formula of the class-party, the communist party, proved lacking as soon as it came to power. My argument is a very technical one, even if it’s also very simple: the Party, in Lenin’s sense, the Leninist party, proved itself through its victory, and contrary to the experience of the insurrections of the nineteenth century—which were all crushed—showed that we can win, with this (rather militarised) kind of organisation. It is very important that it showed that: it had a worldwide audience and rallied millions of people. Even so, I think that it is also apparent that this form of organisation was not appropriate to managing the state, in the long term—all the attempts at socialist states ultimately failed, sooner or later.

A return to the question of organisation has to include an assessment of that experience: the organisation we need can’t just be an insurrectionary combat organisation, but must also allow for a new way of managing the state across a long transition period. I have always said that everyone needs to reflect on this point: and I must admit, I have no clear answer to it, either. The discussion with Daniel Bensaïd wasn’t a dispute over "party or no party"; rather, it concerned a form of organisation that was tested across the sequence of a certain political process, as well as the need to invent an organisation that might prove itself in another sequence of the political process.

This is a difficult question, because it raises the matter of the exact meaning of the word communism (and that’s a major debate right now, as it happens). We can think "communism" in three different, or articulated (but not necessarily incompatible) ways. Communism is a form of ideal or horizon for revolutionary political activity. It does not exactly represent a state of things that has been accomplished and completely realised, but a guiding idea; to borrow from Kant, we could say that communism is a regulating idea, an idea of reason, an idea that orients political action. The second possible way of seeing it is opposite to this: it is a precise state of social organisation, as in the case of the utopian communisms that provided a complete description of the future society in advance. And finally, there’s the idea that communism is a stage in the real process: it is a real movement, something that we can think will come, or may come, for reasons rooted in our analysis of the concrete situation—that is, communism understood as a historical destiny, as a historical category of humanity’s fate. I think that we are always circulating among these three determinations of communism, and when it comes down to it, if we get rid of the purely utopian definition (which is political science-fiction) then that supposes a debate between communism as a political category and communism as a historical category. For Marxists that is a major debate indeed, one that supposes a discussion between voluntarism (politics is more powerful than History) and rationalism (politics has to fulfil the forces of History).

The possible productivity of failure

This is simple enough. Clearly experiences and failures (past ones, or ones that take place elsewhere) are a fundamental notion of politics. We are dialecticians: negation is also a source of knowledge. If something was tried, if it was interesting and it failed, then we have to identify the reasons for this failure.

There will be the lesson that our opponents take: "You see, you failed". So it is extremely important that we draw our own assessment of these defeats in order to show not that they were impossible ventures, but that there were failings, mistakes or wrong decisions—things that have to be corrected, such that they won’t be repeated. Just like how Lenin—to take one historical example—drew fundamental lessons from the total defeat of the Paris Commune. It’s a historical example, but something of a model, as well.

It’s a very interesting question. For a long time in the twentieth century there really was the notion of a communist identity, "Us communists". As if they formed a whole world; and perhaps they did form a world apart, with the very strong conviction that communism was linked to a vanguard, or that there was a communist vanguard that defined its own membership and was separate and distinct from the rest of the world. Sometimes Lenin himself thought along those lines—there is a totally spectacular text of his on that point, explaining that if 180,000 property owners could run Russia then 250,000 communists would certainly be able to, too. It’s what I’ve called the proletarian aristocracy. This aristocratic vision of communism is, in a certain sense, an identitarian one. I’m convinced that this is something we ought to be wary of: after all, despite everything, communism is the real universalism, the conviction that there can be a politics for all humanity. Emancipation is the emancipation of all humanity; and humanity entails a vast range of differences, which will still continue to exist. There will still be men and women; there will still be Finnish speakers and Anglophones; there will even still be different jobs, even if we aim at versatility; and so on. Communism has to be a vision that incorporates such differences and, at the same time, affirms a universal community even within each of them. I would say that communism is not necessarily an identity; it’s not an identity that envelops all the other identities, but rather a movement, a new form of coexistence and commonality among all that is different.