Chrono-cartography of the Paris Commune

For Marx, the greatest achievement of the Paris Commune was its "actual working existence", and we should certainly not exclude its geographical organisation and defensive arcitecture from this category. Ahead of Kristin Ross' discussion with Alberto Toscano at Goldsmiths tonight on the political imaginary of the Paris Commune, we share a series of maps created by Leopold Lambert detailing the shifting architecture of the Commune over time. You can download a high-resolution version of the map here. 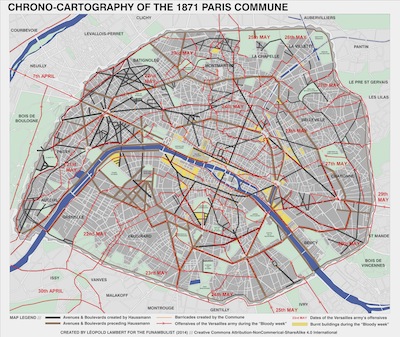 History tends to describe the city where events unfold themselves as a mere context, indifferent to the action that it hosts … I wanted to illustrate how the city, through its constructive, destructive and modificative logics plays a biased role in these historical events. As Karl Marx pointed out in The Civil War in France (1871), many things could have given the Commune higher chances to survive (a more organized offensive against Versailles in the beginning of its existence, the use of the Banque de France left untouched, a more comprehensive defensive strategy etc.), but the thing that the Commune has lacked the most is likely to be time itself, in an effort to transform and subvert the capitalist, imperialist and militarized logics that contextualized the urban fabric in which it was attempting to exist.