Syriza's Left Platform: "Proceed to a counterattack with an alternative plan"

As Greek negotiations continue, we publish a statement by Stathis Kouvelakis, member of Syriza’s central committee, outlining the demands of Syriza's Left Platform, which was narrowly out-voted in Sunday's Central Committee meeting. The Left Platform is calling for a break in the negotiations, a default on further debt repayments, and the adoption of an alternative plan in line with Syriza's pre-election pledges. 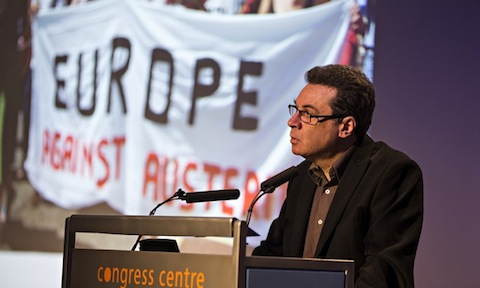 Syriza’s Central Committee session this weekend: 44% in favour of the text of the Left Platform calling for a rupture in the negotiations and for an alternative plan

At the central committee session which ended a few hours ago, the Left Platform submitted the following text, which got 75 votes, with 95 against and one blank vote. The text calls for a break with the lenders starting with a default on the payment of the debt.  In the text adopted by the majority of the central committee, four conditions of an “acceptable compromise” are listed:

To these, the text adds the “indispensable reinstatement of collective conventions and the gradual rise of the minimum wage to 751 euros [its 2009 level]” and stipulates that “any changes in fiscal policy should promote social justice by alleviating the burden of those who are economically disadvantaged and forcing the well-off and tax-escapers at last to pay”.

In his opening report, Alexis Tsipras adopted a firm tone but avoided any precise reference to the current state of the negotiations and what was the basis of discussion of a possible agreement, referring only to the four conditions mentioned above, which do not clarify most of the points of disagreement. The session was also marked by the intervention of the president of Parliament Zoe Kostantopoulou, who supported openly a one-year suspension in the payment on the debt, on the basis of the first conclusions of the Committee for the Auditing of the Debt, which are expected to come out in the next few days. She also rejected the very controversial appointment of Lambis Tagmatarchis as the new director of the reconstituted public broadcasting company ERT.

Tagmatarchis is a person very linked to the media establishment and has already served as the director of ERT under the PASOK government of George Papandreou.


The full text of the Left Platform

It has become now clear that the “institutions“ are not striving for what some are calling an “honourable compromise”. An “honourable compromise” cannot exist anyway by means of privatizations and new burdens on the popular classes, and it certainly cannot exist without a real end to austerity, without a restructuring of (the biggest part of) the debt and without adequate provision of liquidity for the revitalization of the economy.  What the ruling circles of the EU, the ECB and the IMF are ruthlessly and consistently aiming for in the last for months, is to strangle the economy, to milk even the last euro from the country´s reserves and to push an “unprotected” government to full submission and exemplary humiliation.  This tactic of the EU partners was also on display at the Riga summit. The government has no other option but to proceed to a counterattack with an alternative plan that is based on SYRIZA’s pre-electoral pledges and the government’s programmatic announcements.  The following measures must immediately be implemented:

The government has to counter decisively the propaganda of the ruling circles that terrorizes the people with the scenario of full disaster that the suspension of debt servicing and of an eventual exit from the Eurozone will allegedly bring upon the country.

The greatest disaster facing the country is the imposition of a new memorandum in one form or another and the extension of the implementation of past memoranda.  This development must be avoided by any means and sacrifice necessary.

Any alternative solution for a progressive policy against the Memoranda includes first and foremost the suspension of servicing the debt. Notwithstanding all the difficulties entailed, it is much more preferable to any other option for it offers the country hope and prospects.

If the “institutions” continue with their policy of blackmail in the following days, the government has a duty to clearly state from this moment on that it will not “strip” the Greek people by robbing them of their savings, that it will not proceed to the next IMF payment, and that it intends to put forward alternative solutions for the country’s course, on the economic, social, political and strategic levels that will safeguard the implementation of its program.