"Is There War in Mexico?" Warscapes interviews Jon Sack and Adam Shapiro, authors of La Lucha 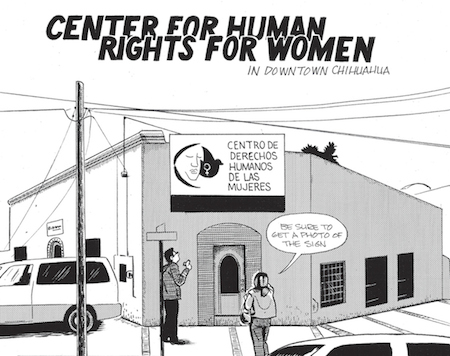 Micheal Busch of Warscapes recently sat down with Jon Sack and Adam Shapiro, authors of La Lucha: The Story of Lucha Castro and Human Rights in Mexico. Their conversation illuminates on all the moving parts that culminated into this beautiful and chilling graphic novel. Read an exceprt from their conversation below:

MB: Why render the story of Lucha Castro and her work in graphic novel format?

AS: So, I had been brainstorming different ways, things that hadn’t been tried before, hadn’t been exploited as tactics for unique storytelling using the defenders’ work, trying to present them to new audiences beyond the typical human rights-interested audience, and trying to figure out—using new media and traditional media—ways of getting these stories out there. The graphic novel has been one of the tactics. Strategically, it is a different way of presenting human rights defenders’ stories in ways that are accessible, accessible to people, even, who are not fully literate which is important in many of the countries in which literacy rates are low.

The graphic novel format is also a good way to reach younger audiences, and it is something that can be easily shared. And it catches people off guard! Certainly the reactions so far, in the human rights community at least, have been really fascinating. The book gets an almost child-like response. Maybe it’s the format—I don’t know—but people do get excited by having this book in their hand. It resonates in a different way that just reading a human rights report.

MB: I’m interested in the depictions of violence in La Lucha. Reporting on Mexico often sensationalizes the violence there, almost eagerly so at times. Still, it is the case that violence has saturated the fabric of social life in parts of the country in recent years. In the book, though, there is very little violence shown even as the stories almost all revolve around grisly murders and violence. Can you talk about how you chose to represent violence in the stories to the extent that these decisions were deliberate?

JS: It is definitely something I was conscious of while making the book. I wanted to create more of an atmosphere of violence rather than depicting it directly. So in the stories, the moments of murder are brief. I didn’t want that to be a focus. I was also very conscious of the fact that I was depicting the murder of people who were loved by their families, and conscious of the fact that they would likely be reading this book. So I definitely didn’t want to dwell on the more gory aspects of this type of heinous violence in which their loved ones had been killed.

When we were there, we were going back and forth quite a bit between Chihuahua and Ciudad Juarez. I had been to Juarez quite a few times before, and it was strange. We kept hearing about violence, but we wouldn’t see it. Every morning we would wake up—we were staying in the house of one of Lucha’s sisters—we would have breakfast, and get an update on the local gun battles that had happened a few blocks away, the policemen that had been killed. One day, Gabino—on his way to pick me up in Juarez—passed a guy who had been shot dead and left on the side of the road…there was this menacing aura where you knew things going on, but it was never in your face. Another time, I was driving through town with a guy to photograph images of Juarez, and we got stuck where suddenly we were surrounded by guys with machine guns who had blocked off the streets. We sort of sailed through slowly all these people who were being held at gunpoint with no idea what was going on. I read the next day in the paper that it was the federal police, but no one was in uniform. Again, all of this contributed to this heavy atmosphere.

“Is there a war in Mexico?” This is a question we asked a lot of people while we were there. “Do you consider this a war?” And a lot of people said yes, they did consider it a war. Other people remarked that it was actually a lot worse a few years ago, when the army was in the streets, sticking guns in your face, and there were shootings happening everywhere. All of that has disappeared a bit. It’s a war, but it’s not a war. No one knows who the enemy is, there’s a constant instability. It was that kind of aura of instability and violence that I wanted to seep through the pages in the book.