"This Revolution has begun, and is in progress" — Frederick Douglass on the weakness of masters and anticipating revolutionary time

In celebration of 150th Juneteenth, and with an eye to the tragedy in Charleston, we share an excerpt from David Roediger's Seizing Freedom: Slave Emancipation and Liberty for All in which Roediger chronicles Frederick Douglass's insight into the weakness of masters and the ability to anticipate revolutionary time.

"Douglass knew that slaves could be counted on to show up as opportunities for freedom arose. They showed up early, while the federal government was still toying with returning fugitives to their masters." 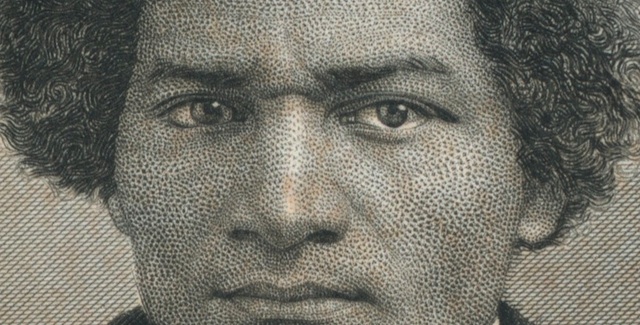 When the war began, Lincoln vindicated Douglass’s pessimism. The president’s position well into the conflict, even as military challenges mounted, remained that the “paramount object in this struggle is to save the Union, and is not either to save or to destroy slavery. If I could save the Union without freeing any slave I would do it, and if I could save it by freeing all the slaves I would do it; and if I could save it by freeing some and leaving others alone I would also do that.” Douglass took to describing the conflict as a “war in the interests of slavery on both sides,” with the South openly fighting for its peculiar institution and Lincoln promising not to interfere with it where it existed. “The slave who loved us,” Douglass wrote, “was hated . . . as the nation went in search of the means of defeat.” Such biting critiques began to connect military and moral decisions immediately. In May 1861 Douglass editorialized on “How to End the War,” insisting that “carrying the war into Africa” was the key to peace and freedom. In doing so, he both adopted John Brown’s strategy of liberating and arming slaves and italicized the phrase to signal that he was directly echoing Brown’s own words.

A month later, in castigating Lincoln’s policies as weak, Douglass challenged the idea that whiteness held the key to able and manly citizenship. The Union was “fighting with one hand” because it abjured emancipation: “What a spectacle of blind, unreasoning prejudice and pusillanimity is this!” With the “national edifice . . . on fire,” Douglass held, “every man who can carry a bucket of water, or remove a brick, is wanted.” Nevertheless, he continued, “those who have the care of the building, having a profound respect for the feeling of the national burglars who set the building on fire, are determined that the flames shall only be extinguished by Indo-Caucasian hands, and to have the building burnt rather than save it by means of any other.” The real Lincoln-Douglass debate was then on, focusing squarely on what was possible.

Douglass’s position in this pivotal time deserves close attention, as he was the most celebrated and forceful figure arguing in print for turning the Civil War into a revolution. (On the ground, Harriet Tubman was the key figure in such initiatives.) As an ex-slave, Douglass could make his case with special force, insisting that he knew the slave’s desire for freedom, and the rigidity of the master class, could create the possibility for just such a transformation in the war’s meaning. Douglass appreciated both the ways that longstanding property-driven bargains with injustice exerted pressure to keep abolition impossible and how the present movement of slaves made attacking slavery logical and even necessary. In registering both truths, he often appears to modern historians as contradictory. Recent scholarship on the relationship of Lincoln and Douglass searches in the psychology of the two men—mostly Douglass—to explain the wide gulf between them through much of 1862. Douglass, seen as practicing the “politics of hope” in the 1850s, is cast by David Blight and James Oakes as moody and mercurial in the early war. In their view, he indulged in impatient millennial hope and misunderstood the president’s determination to press matters to their conclusion. Douglass’s religious views and his psychology, forged in the relation of master and slave, allegedly made for a fear of compromise. Blight’s emphases are particularly puzzling in that, at times, he realizes that more economical and elegant explanations are available. Douglass, he more persuasively wrote at one point, sought “remorseless revolutionary struggle,” just what Lincoln “did not want.”

Indeed, for all his pessimism, Douglass proved far more able than Lincoln to anticipate the impossible speed with which liberation would come. He could imagine that the Civil War might see the suspension of longstanding proslavery political and economic common sense. He saw that events could unfold at the breakneck, millennial pace of what historians of the French Revolution have called “revolutionary time,” transforming the very notion of how history moved. Douglass had a double advantage in seeing the end of impossibility because he knew firsthand the vulnerability of the master class, the desire for freedom among slaves, and the connections between the two.

Douglass’s insights into the weaknesses of masters are perhaps best illustrated by his embrace of a complicated little joke. With the Civil War scarcely six months old, Union successes in the low country of South Carolina had opened the possibility of a new world. Frederick Douglass captured as much when Douglass’ Monthly printed this waggish advertisement from Beaufort, South Carolina:

$500 REWARD.—Rund away from me on de 7th ob dis month, my massa Julian Rhett. Massa Rhett am five feet ’leven inches high, big shoulders, brack har, curly shaggy whiskers, low forehead, an’ dark face. He make big fuss when he go ‘mong de gemmen, he talk ver big, and use de name ob de Lord all de time. Calls heself “Suddern gemmen,” but I suppose will try now to pass heself off as a brackman or mulatter. Massa Rhett has a deep scar on his shoulder from a fight [and a] scratch cross de left eye, made by my Dinah when he tried to whip her.

The best-known citation of this incredible prank suggests that Frederick Douglass’s publication broke the story in the North, and the text certainly reflects Douglass’s early desire to show that the unwillingness of the North to attack slavery could not withstand the pressures of combat and the indomitability of slaves. It would even be easy to imagine Douglass as the author of the pointed joke.

However, the mocking offer of a reward dated from November 9, 1861, long before Douglass’ Monthly featured it in January 1862. In the interim, its circulation in the white mainstream press illustrated the fact that openings toward African-American freedom were not only rapturously experienced but also endlessly represented, for a considerable time fascinating white readers. Republications of the Rhett text—the authorship remains unknown, although a South Carolina ex-slave named Sambo Rhett does appear as a petitioner in South Carolina records in 1863— anticipated the various ways that modern scholars of humor, social history, and even folklore would later interpret it. To an anti-African-American paper like the New York Evening Express, the ad signaled the consequences of failures to always return runaway slaves to masters. It seemed ominous reportage, not parody. The advertisement’s first publication in a book regarded it as “clever travestie” by an ex-slave. A military camp publication could likewise catch the humor.

Douglass’s own reprinting of the Sambo Rhett joke, told in the minstrel tones he generally despised, was by far its most interesting use. In Douglass’ Monthly, the advertisement acknowledged magnificent but uneven transformation at the very time that the publication’s editorial line was understandably unsmiling in its bitter denunciations of the timidity of the Lincoln administration. As such, the humor illustrated Sigmund Freud’s contention that jokes function in ways that are inherently related to rebellion in their refusal to accept the existing order’s miseries. The joke insisted on the possibility of something different emerging even when that possibility appeared totally blocked from logical realization. Indeed, it apprehended that the world had turned upside down but that the master’s return still seemed a threat. Its closing paragraph offered a $100 reward for the master’s safe return but $500 if he were shown dead. The master, in the case of Sambo Rhett, was gone, and the slaves could rejoice. But their freedom was not recognized. Indeed, as South Carolina historian and archivist JoAnn Zeise has observed, Union forces kept meticulous records of wages owed for labor by slaves in occupied areas of South Carolina early in the war not in order to pay the slaves but to be able to eventually repay their masters. As Douglass’s hopes soared, he had work to do.

More important than his appreciation of the vulnerability of slave-owners was Douglass’s knowledge that slaves were ready to conduct remorseless struggle and had begun to wage it. Douglass’s own views took the slave as a guiding star; he sought to keep faith with and to trust in them. His recollections of the dawn of the war in the last of his three autobiographies spoke with startling candor: “From the first, I, for one saw in this war the end of slavery and truth requires me to say that my interest in the success of the North was largely due to this belief.” This view was not unique. An African-American newspaper in New York headed its reaction to the early war with “Second American Revolution” and assured readers, “This Revolution has begun, and is in progress. We say so because the Nation has come into direct physical conflict with the slaveholders!” For Douglass, the war not only changed the prospects for slaves being freed but also raised the possibility that they would free themselves, in the process deciding the war and transforming the nation. Weeks after the shooting started, he offered a prescription for moral and military success: “Let the slaves and free colored people be called into service, and formed into a liberating army, to march into the South and raise the banner of Emancipation among the slaves.” Even his insistence that he should be able to be glad amid frustration and forlorn amid joy kept faith with Douglass’s fiercely dialectical understanding of the moods and rhythms of slave culture and its blues sensibilities, brilliantly explicated in Sterling Stuckey’s recent work.

For Douglass, what slaves thought of the meaning of the war mattered more than what Lincoln thought. Douglass’s own life bespoke the fact that the actions of a relatively few slaves could be catalytic. Stealing himself away from slavery and then standing against it, he had taken up the role of the militant fugitive, a role that the Trinidadian historian C.L.R. James described as the “self-expressive presence . . . embodying the nationally traumatic experience of bondage and freedom, [without whom] anti- slavery would have been a sentiment only.” Douglass knew that slaves could be counted on to show up as opportunities for freedom arose. They showed up early, while the federal government was still toying with returning fugitives to their masters.

Adapted from "A Small Joke and the Lincoln-Douglass Debate" in Seizing Freedom: Slave Emancipation and Liberty for All.